I’m not sure if anyone’s keeping track, but I haven’t had the best luck with yucca. At this rate, we’ll never be friends.

First, there was the Baton de Manioc fiasco- for our Angolan Global Table.

That night, after eating several of the batons, I blacked out – lost hearing and sight – crashed to the floor and went into shock. The scariest part? I was holding Ava. Thankfully Keith caught her as she was slipping out of my arms – head first, I might add – and kept her from tumbling down onto the tile. I still get choked up thinking about what could have happened that night.

The doctor blamed dehydration, but I’m pretty sure overindulgence in yucca had something to do with it.

Second, there was the yucca based sweet, Getuk Lindri – for our Brunei Global Table.

Even after doing hours of research I was unable to make a good batch of Getuk Lindri. First the yucca mixture was sticky and unwieldy. After several modifications it then came out dry and bland. I modified that recipe over and over and over and over again – hoping to provide you with a foolproof recipe to try. I’ve never failed so miserably – 0r colorfully. Those pink and mint green balls sure were pretty, but good gracious did they ever screw up my pasta maker.

These greens were a huge flop. I’m not sure how I did it, but I put out a dish that was at once dry and soggy. And poorly seasoned.  I clearly need to borrow someone’s grandmother from Africa to show me how to do this dish proper justice.

I do believe my luck’s run out with yucca. I may never cook it again. 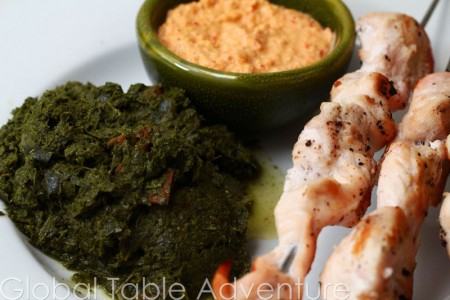 The deep forest green color was rather beautiful. While Keith and I weren’t in love with this dish, I’m proud to announce that Ava really liked the Stewed Yucca Leaves. Proud and … bewildered. Does this make her less picky than us?

The moment I cut open the bag of cassava leaves, our kitchen took on the distinct smell of fresh hay. When I shut my eyes, I was transported to one of the stables where I learned to ride. The strong, grassy smell overpowered all the ingredients, including the peanut butter. In order to balance things out, I suggest doubling the tomato and peanut butter.

Cassava leaves, even when chopped fine, are coarse and fibrous. Indeed, if you’ve ever chewed on grass you know there are always some tougher fibers that remain at the end – so it is with cassava leaves. When the teeth smash the leaves together, some grassy flavor comes out, but he majority of the food remains unharmed and is, in essence, swallowed whole. 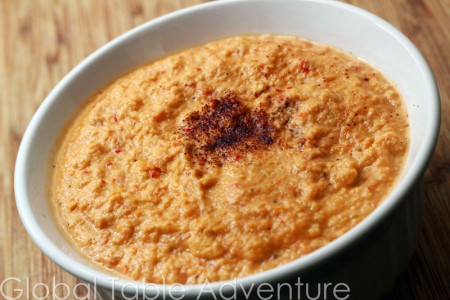 I enjoyed trying this sauce simply because I’d never had ground melon seeds. The melon seeds had a raw, grassy nut flavor which was fairy mild. As soon as the ground seeds hit the liquid and heat, they melted into a paste, rather like peanut butter in texture, albeit less smooth.

Be sure to add enough water to thin the thick mixture into a sauce.

While the potential is great with this sauce, our recipe failed on two levels. First, I think there was entirely too much onion flavor. In fact, that was mostly what I detected. Second, the sauce needed more heat – either from the addition of more chili powder or more chili peppers. 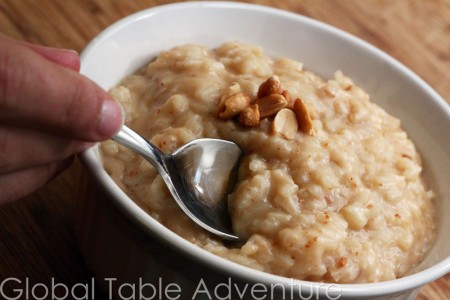 The idea of peanut butter rice pudding is incredible. I enjoyed heaping my spoon with the sweet, nutty goodness – this is basic comfort food. 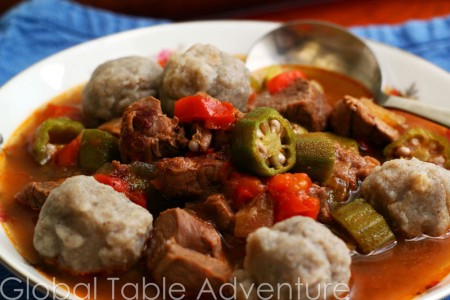 The incredibly simple stew has giant flavor and fills the house with the scent of “good” – perfect for a cool fall afternoon. The lamb becomes tantalizingly tender from long, slow cooking.

I didn’t make enough for leftovers. I would have doubled this recipe if I’d known I would like it so much! 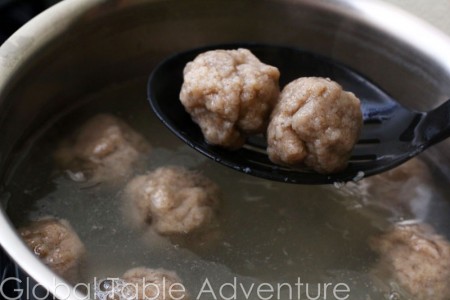 This was an interesting Adventure – this was my first time cooking dough over a double boiler. While it seemed so strange, I suppose it works like an impromptu oven. The basic premise of the millet balls providing body and sustenance to our stew worked perfectly.

Millet flour has a strong, bitter flavor – much more so than whole wheat flour. I think I would have enjoyed this more if I had 2/3 all purpose flour to 1/3 millet (instead of 1/2 and 1/2). The texture was dense and pasty, reminding me of the Baton de Manioc (yucca steamed in banana leaves) we did so many months ago. 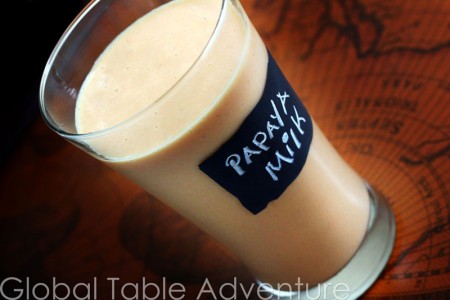 The papaya milk was thick, like a raita. The cardamom and ginger combined to make a spicy-sweet, chai-like flavor.

While some might enjoy the spices, I think they were a bit overpowering and would have preferred half the amount of seasoning. I suggest adding a little spice at a time, until you find what you like. You can always add more, but you can’t take it away!