This Halloween go international: spin the globe and dress up as an iconic food from whatever country strikes your fancy! To get you started, here are 16 adorable costumes representing famous foods from all over the world. 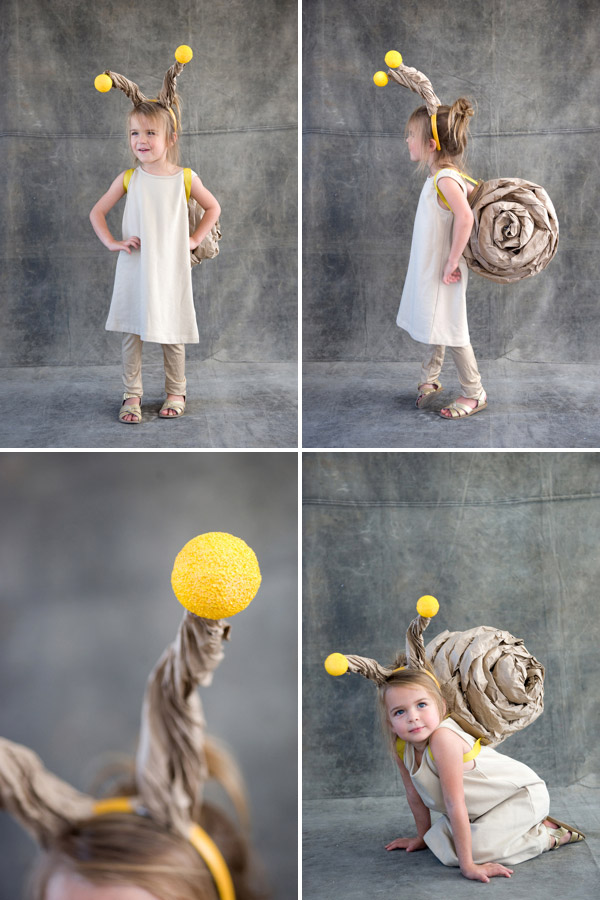 Oohh la la! A bit of newsprint and foam balls and you’ve got the most adorable snail costume.
Learn how to make the costume at Oh Happy Day.

While the French are best known for their love of snails, the snail has a long (and slimy) history. Archaeologists have found snail shells from prehistoric times. The Roman Philosopher Pliny the Elder considered escargot an elite food for the Romans. There is also a recipe for snails in the oldest surviving cookbook written by Marcus Gavius Apicius, a Roman ‘foodie’ from the 1st century. 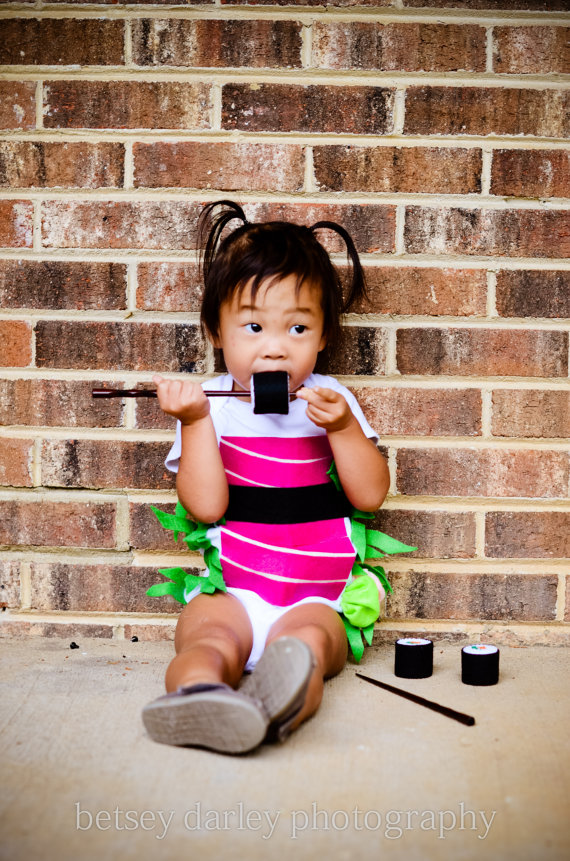 This little sashimi eating sushi is way too cute. Find the costume on The Wishing Elephant, then try making our Futomaki recipe (a.k.a. Veggie Sushi) – it’s super fun!

Sushi is a Japanese dish originally developed as a fermentation process for fish. It originated in Southeast Asia before spreading to south China and later Japan. It wasn’t until later, in the Edo Period (1603-1868), that the rice in sushi was no longer used for fermentation. The nigiri sushi we know today was invented by Hayana Yohei as a fast food that could be eaten in public or the theater. Did you know that after an authentic sushi experience you can offer to buy the chef a drink in gratitude for the meal? 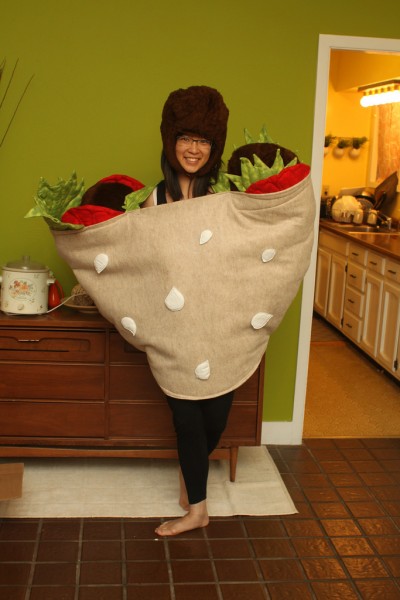 Make a statement this Halloween. Turn your head into a falafel ball and replace your arms with tomato slices!  Great costume, Paula!

The origins of falafel are unknown. It is made from grinding up chickpeas, fava beans (or sometimes both) and deep frying them into a ball or patty. It is the second most common dish made from chickpeas – after hummus.  The world record for the largest falafel ball is 164.4 lb and was set in Amman, Jordan on July 28, 2012. Falafel is known in Egypt (excluding Alexandria) as ta’aimiya. 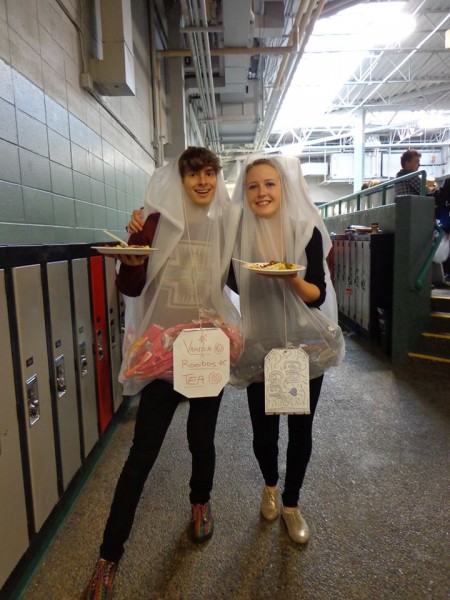 Dress up as Rooibos, the caffeine free tea grown throughout southern Africa and win MAJOR points from every tea nerd (including me!). Or go British, with Earl Grey. Either way, the look is smooth! Learn how to make the costume… Oh, and get in the mood by trying our African Rooibos Latte recipe.

Tea plants are native to East and South Asia. Though nobody is sure who first thought of making tea with the leaves, Chinese legends attribute the inventor Shennong; he designed the tea leaf shredder.

In the United Kingdom, each person drinks an average of 1.9 kg of tea per year, making the British one of the largest consumers of tea in the world. Tea is not only a drink, but in the United Kingdom and Ireland, it’s also meal. Afternoon tea is a light meal usually held between 4 and 6 pm while high tea is meal in the evening, held between 5 and 7 pm. High tea usually includes a hot dish and is followed by tea cakes and bread served with butter and jam. 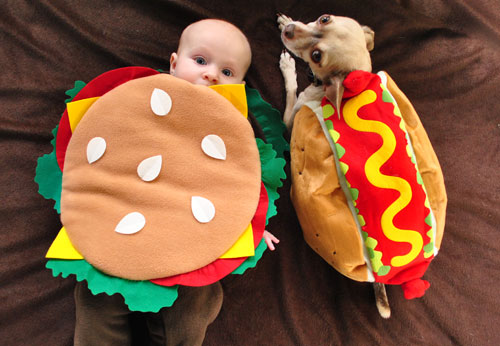 These all-American munchkins are the cutest! And just look at those teeny fingers peeking out from the lettuce.

There are many claims to the original hamburger, mostly between 1885 and 1904. The earliest report of a “hamburger sandwich” that we know of is in an 1896 issue of the Chicago Daily Tribune: “A distinguished favorite, only five cents, is Hamburger steak sandwich, the meat for which is kept ready in small patties and ‘cooked while you wait.'”

There are many variations of the hamburger worldwide, with patties consisting of different meats (including beef, turkey, chicken, bison, ostrich and venison) or meat substitutes (such as tofu, TVP, seitan, quorn, beans, grains or an assortment of ground vegetables). Photo found on Gail Turpin Design under a page about the work she did for the Scottish company Macsween.

Whether you love eating it or not, dressing up as Haggis is a definite Halloween do. I guarantee you’ll be the talk of the party!

Though Haggis is popularly assumed to be of Scottish origin, historical evidence cannot pin it down to any one place. Haggis is featured in folklore, including a tale that it is a creature that runs through the Scottish Highlands. According to one poll, 33% of Americans visiting Scotland assumed that Haggis was indeed an animal. If you aren’t a fan of haggis then maybe you would instead enjoy Haggis Hurling, a competition that involves—you guessed it—throwing haggis as far as possible. The world record is held by Lorne Coltart who hurled his haggis 217 feet in 2011, during the Milngavie Highland Games in Glasgow. 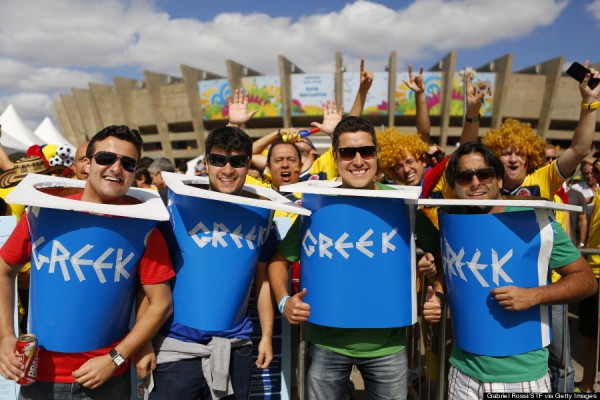 It’s amazing what a bit of cardstock, foam core, and tape can do! These guys look great (and healthy, too). Get inspired by trying the recipe for our favorite treat made with Greek Yogurt.

Greek yogurt is yogurt that has been strained through a cloth, paper bag or filter. It is used most commonly as a base for a popular Greek dish tzatziki—which is a Greek sauce served either with grilled meats or pita bread for dipping—or as a dessert with various sweets served on top such as honey, sour cherry syrup or fruit preserves. 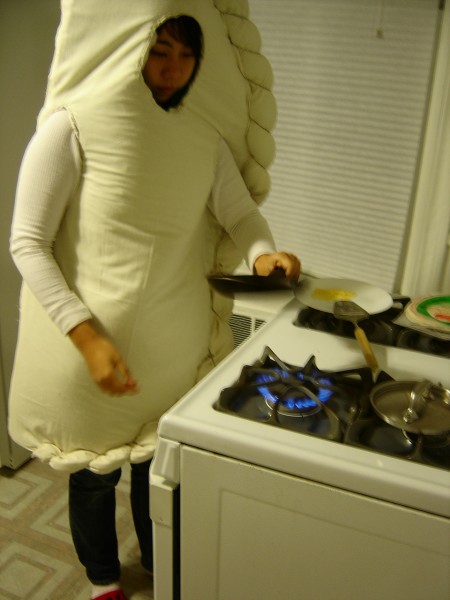 Not only is she an empanada – she’s an empanada that can cook! Celebrate this winning costume with real beef or apple empanadas.

Empanadas can be found all over the world, with first mentions occurring in the Middle Ages on the Iberian Peninsula (think Spain and Portugal) . There are Empanada recipes in a 1520 cookbook titled Libre del Coch by Ruperto de Nola of Barcelona. The Spanish word for bread is “pan”; “Empanar is a verb form that means “to bread”. Empanada is the past-participle “breaded.” 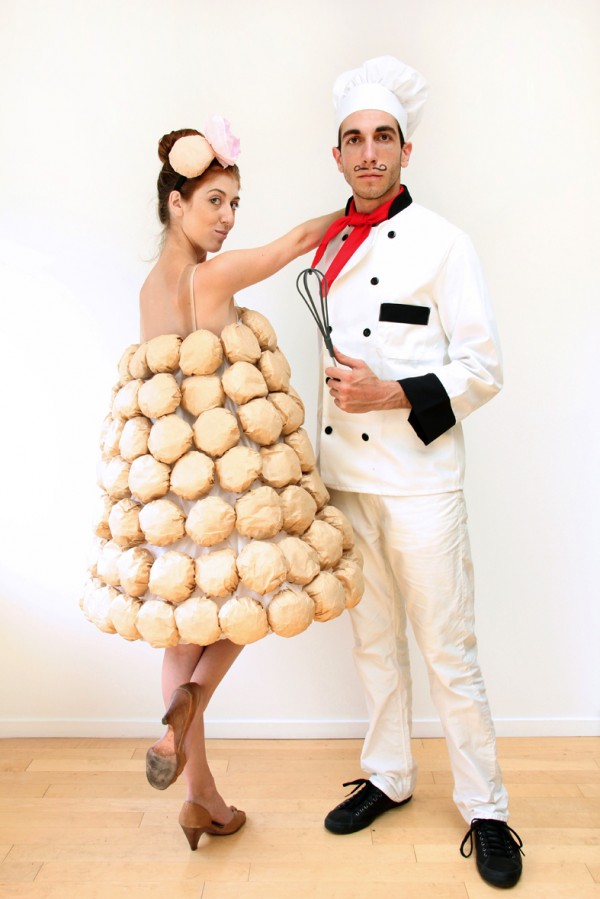 Nothing like a few dozen coffee filters to make the sweetest French wedding cake ever (the French chef is  nice touch, too)! Find the step-by-step instructions on Studio DIY.

The Croquembouche is a tower made from dozens of pastry puffs (called profiteroles) and drizzled with fine threads of caramelized sugar. The name means “to crunch” – which is exactly what the dessert does when you take a bite! You can thank Chef Marie-Antoine Carême (1784-1833) for inventing the confection. He is considered the world’s first celebrity chef and was nicknamed  “Le Roi Des Chefs et le Chef Des Rois” which means “King of Chefs, and the Chef of Kings.” 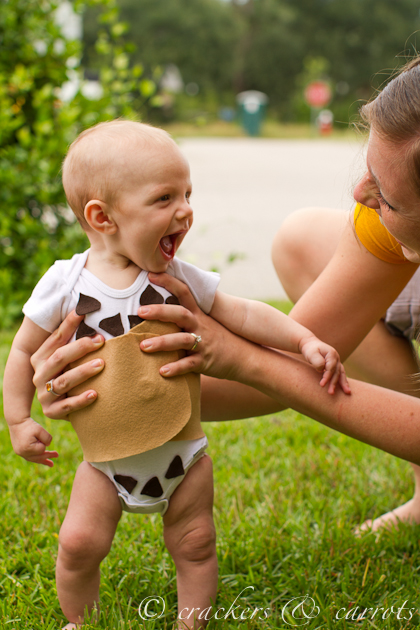 Caroline Edwards, author of Chocolate & Carrots blog, and her son.

A little felt, a onesie, and the cutest baby around?? This cannoli costume is brilliant!

Cannoli are Italian pastries filled with sweetened ricotta. Historically the treats were made for Carnivale, quite possibly as rather suggestive fertility symbols. Italian ethnographer Giuseppe Pitré wrote in his book “Credenze e Pregiudizi del Popolo Siciliano, Vol. 1” (“Customs, beliefs and prejudices of the Sicilian People Vol. 1”) that cannoli were not favored by people of any particular ranking or class but were desired by rich and poor alike. 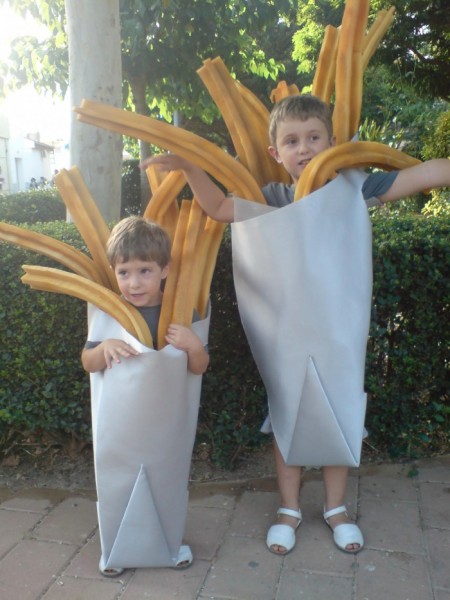 I seriously hope someone is dressed up as chocolate dipping sauce or a bowl of cinnamon sugar. Here’s our Churro recipe, for those who are now -like me – hungry!

Churros are another food where the origins are unclear; a theory is that the Portuguese brought them to Europe while another is that Spanish Shepherds made them to substitute for fresh bakery goods. Churros are named after the Navajo-Churro Sheep due to resembling the horns of the sheep. It’s important that Churros have maximum surface area and minimum volume to allow for even heat distribution, giving us the crunchy sweet treat we know. There have been cases of Churros exploding if the recipes are off, including a newspaper that was successfully sued for printing a Churro recipe that caused the treats to explode and injure 14 people; the case took seven years to fully resolve. 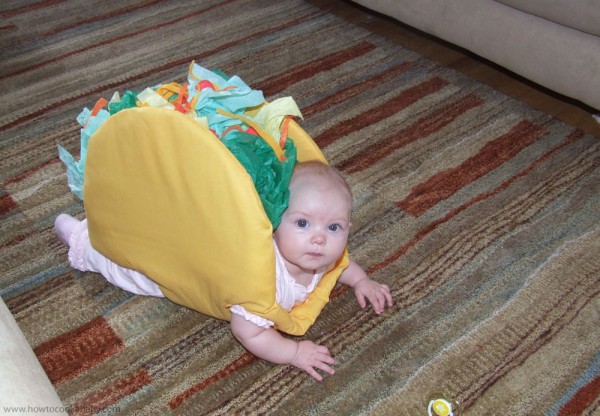 Though the details seem to be unknown, the origin of the taco dates back to before Europeans arrived in Mexico. Evidence was found that the people of the lake region in the Valley of Mexico ate tacos filled with small fish. There are many types of traditional tacos, from “spit” or “grill tacos” to shrimp tacos. These girls definitely capture pavlova’s sweetness. This concept is a must for New Zealand, especially considering it stars their beloved Kiwi! Try our pavlova recipe to get in the spirit of things.

Pavlova was created by an Australian hotel chef in Wellington, New Zealand in honor of the famous ballerina Anna Pavlova, during her 1926 world tour visit.  There is a chapter in the book Food on the Move: Proceedings of the Oxford Symposium on Food an Cookery by Harland Walker about the dish, titled “The Pavlova Cake: the Evolution of a National Dish.” In this chapter, Helen Leach writes about the history of the dish, including argument between Australia and New Zealand as to which claims creation of the dish as well as how the modern pavlova evolved from that first meringue cake of 1926. There are no words for this costume! RUN, don’t walk, to your nearest Indian market and grab a bag of rice. Cut holes for the head, arms, and legs. So stinkin’ cute!

P.S. Wondering what to do with all the rice? Try one of countless rice recipes from around the world. It’ll be gone in a flash!

The word basmati is derived from the Sanskrit word “vasmati,” meaning “fragrant.” Indian traders brought the rice to the Middle East. It can be difficult to tell basmati from other types of cheaper rices. In 2010 the United Kingdom ran a test on wholesaler supplied rice and discovered that out of fifteen, four samples of what was supposed to be genuine basmati rice had cheaper kinds mixed in; one lacked basmati entirely. Authentic basmati has a delicate long grain and tastes best when rinsed and soaked for thirty minutes prior to cooking. 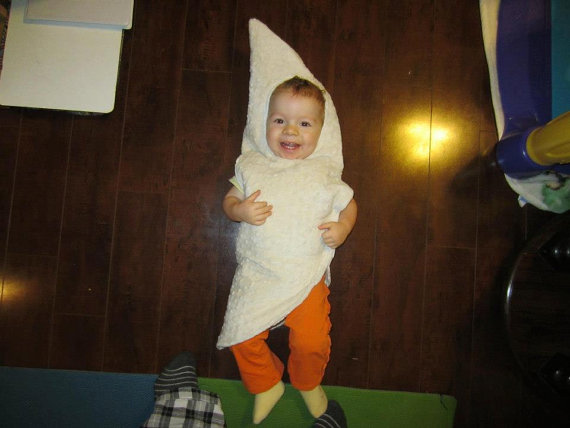 Costume by ArlaDesigns on Etsy

I’d be smiling, too, if I were dressed like this sweet pierogi!
Can’t get a costume fast enough from Arla Designs? Try our homemade recipe for cheese and potato pierogi.

There are over ten ways to spell pierogi (pirogi being one!). The root meaning of the word is “festival”. Pierogi can be sweet or savory – fillings might include berries or mushrooms, cheeses, meats, onions, cabbage, sauerkraut, spinach—and, well, I could go on a long time on savory options because it’s honestly up to the preference of the chef what you fill them with. No wonder the word basically means festival – you could bring these to absolutely any occasion and it’d be a party! Dressing up like a spicy tube of Sriracha is hot, hot, hot. Get inspired by trying one of our recipes garnished with sriracha, like our Spicy Vietnamese Slaw or Thai Green Papaya Salad, or even Lao Rice Noodle Soup.

There are many versions of where Sriracha comes from. Most attribute the sauce to people in the Thai town of Si Racha. As the story goes, Burmese workers came in to buy chillies, vinegar, sugar, and salt to make the hot, tangy sauce. The storekeeper liked what she saw and started making and selling the sauce, too. Today, the sauce is enjoyed worldwide. In Thailand, it is used as a dipping sauce; in Vietnam it is used as a condiment on pho. I’m more than a little obsessed with our reader Camilla’s ingenuity with the spice rack costume she made for her son. We all know our spices lose much of their flavor after 6 months (sometimes sooner) – why not send them out in style on Halloween?

Love it!
Special thanks to sweet Mickaela C. for her help researching these yummy costumes.