We had some grand plans, Mr. Picky and I.

We were going places.

Specifically,  to a new house. Actually, it was built in the 1960’s. But it would have been new to us, once we bought it. The house we’re in is from the 50’s, so this one seemed light years newer.

As with any home, there was good and bad. The good? A quiet retreat on Lake Keystone with lake views and private access to the water. The bad? The house was incredibly far from any sort of international markets. Nam Hai would have been a 45 minute ordeal. Even getting a gallon of milk would have been a 10 minute car ride – minimum. And that’s not even to a grocery store. That’s simply to the gas station.

Shopping trips would have been epic, really.

Unfortunately the deal fell through.

I’ve been trying to find the silver lining in all this.

Just yesterday, as I walked to Whole Foods, pushing Ava in her stroller, I smiled.

There’s good in everything.

“What will be will be. The future’s not ours to see.” 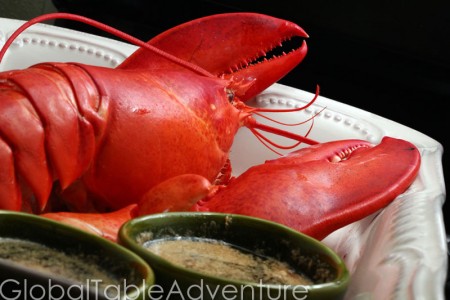 The vanilla-shallot dipping butter was incredible – the perfect accent to sweet, fresh lobster. One of our longtime readers, Jessica B., suggested trying it with scallops and I think she’s 100% right! Yum. I also wonder how it would taste if used for dipping artichoke leaves? Heck. If all else fails, I’ll just drink it straight up.

Cooking the lobster. At one point Mr Picky said to me “Am I going to have to do it?” This caused an interesting reaction in my brain. All at once I wanted to punch him in the nose, run away, and scream “Yes, please.” Next time I think I’ll choose “Yes please.” 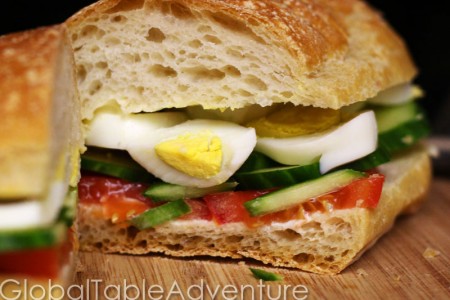 The only real problem with this sandwich is that it does not store well. You pretty much have to eat it within an hour or so of making it – otherwise the tomatoes might make it soggy. 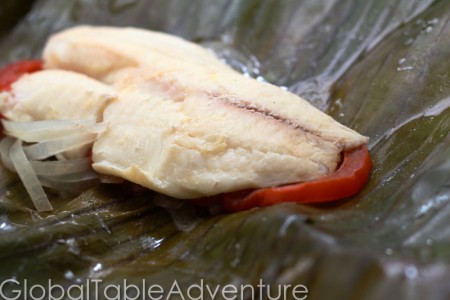 Other than finding the banana leaves (either at a Latino or Asian market), this was an easy enough dish to prepare. In the future, I would consider adding some more veggies – just for fun. Perhaps some sliced summer squash or zucchini. As for the banana leaves – I love the artichoke flavor they impart on the tender fillets.

Be careful when you open up these packets – while it cooks, lots of very hot steam condenses on the inside, making a molten hot puddle that will want to pour all over your plate. 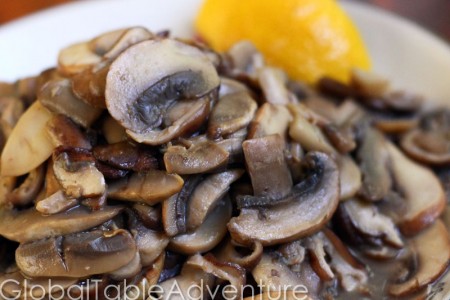 Mushrooms and lemon juice are a perfect pair that I would have never thought of. I love mixing a few varieties of mushrooms together to get more interesting flavor. A healthy sprinkle of salt really brings this dish alive.

Mr. Picky, when asked what he thought, said “Wow. Lemony.” He then proceeded to push them around, hoping I would think he ate more than one bite. I simply took his plate and ate his share. Hey, at least he tried them! 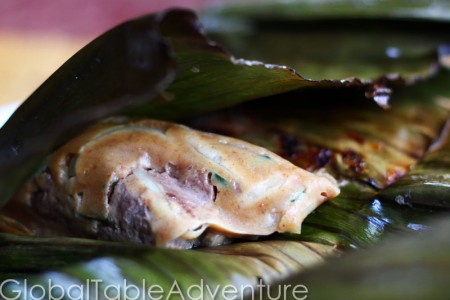 The best part were the crusties formed from the hot grill caramelizing bits of the peanut butter sauce. Yum. Oh, and Mr. Picky ate two portions of this dish, more than making up for the mushroom dish. If you’re not interested in cooking goat, you can make this with chicken or beef, too.

I’m not sure what I thought about goat. I’ll have to have it on its own, without the bold flavors of the sauce. Also, the onion and peppers retain a bit of crunch which Mr. Picky liked but I was unsure about. 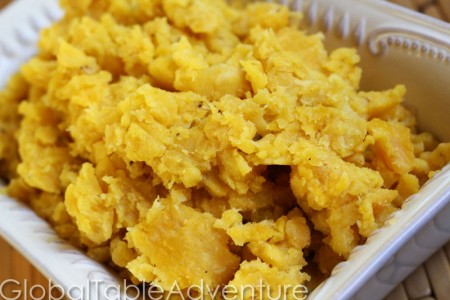 What I liked most about this dish

Heavy, filling, and affordable, this dish is a great way to stretch your dollars.

I was expecting a soft, smooth texture, like mashed potatoes. These babies are not easy to mash –  I almost had yucca flashbacks. Although, nothing could be more unwieldy than the mighty yucca – my nemesis.

I’m not entirely sure that’s the proper use of the word nemesis. Anyone know?

Introducing… sound. The next few years are going to be funny. Love, Proud Mamma Sasha