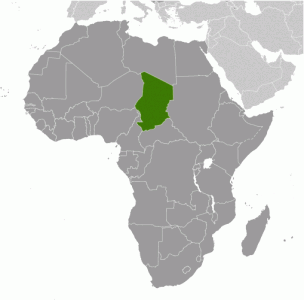 What a difference a few miles can make. Chad is divided into three main geographic zones – steamy Sahara dessert in the north, the central Savannah, and semi-tropical south. As the landscape changes, so too does the diet. From the north, to the south, very few cultural similarities connect the people of Chad.

In northern Chad the people enjoy a diet rich in meat, particularly lamb. Savory pieces of meat might be grilled or stewed with vegetables, such as okra, peppers, onions, and tomatoes (recipe).

Many dishes in the north are prepared with yogurt, butter, and milk. In fact, milk stands line the streets in Northern Chad – where busy shopkeepers blend tropical fruits like papaya and mango with milk, into refreshing beverages (recipe).

Central and Southern Chad enjoy great quantities of fish, thanks to the plentiful waters of Lake Chad and the Chari River. Meat is not readily available and, with less emphasis on dairy products, lemonade stands dot the countryside instead of milk stands.

A popular drink throughout Chad is Karkanji – iced hibiscus tea with the addition of ginger and other spices. This drink is popular throughout western Africa – we provided a basic recipe for hibiscus tea when we had our Burkina Faso Global Table.

Millet is a staple in Chad, particularly to the east. Millet flour, somewhat bitter and earthy in flavor, is typically cooked into porridge or thick dumplings to eat with stews and sauces (recipe).