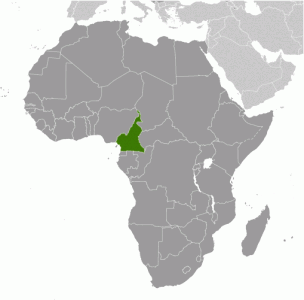 If you’re going to stereotype Cameroon, that’s just about the best way to do it.

This unusual food combination stems from Cameroon’s origins, in 1961, when this African country formed from the union of two colonies, one British and one French.

Like most coastal African countries, the people on the shore towns of Cameroon rely on fish, serving them up grilled, fried (recipe), steamed in banana leaves, or stewed with plantains, corn, yams, or beans on the side. One typical dish is corn cooked with plantains (recipe). Further inland, dinnertime gets a little more bizarre, as mice, snakes, and monkeys are hunted in the bush and stewed with a little water, tomato or peanut sauce.

Most meals are served with fu-fu (soft, starchy mixtures pounded into a paste – often cassava), millet, or rice.

Peanuts, called groundnuts in Africa, are particularly plentiful in this region. They make their way into sauces, stewed vegetables (like bitterleaf greens), breads and desserts. Spicy peanut sauces are poured over fried fish, chicken, and meat (recipe). Perhaps the most addicting way the urban Cameroonians eat peanuts is spread on baguettes or in croissants, then heated in the oven until warm and gooey (recipe).

Cameroon grows many tropical fruits, including the mighty mango. One traveler recounts the mango daiquiris on his trip to Cameroon as the best daiquiris he’s ever had (recipe). This is surely thanks to the high sugar content of a perfectly ripe mango, nectar so sweet it makes your eyes water. 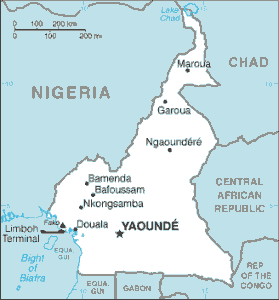