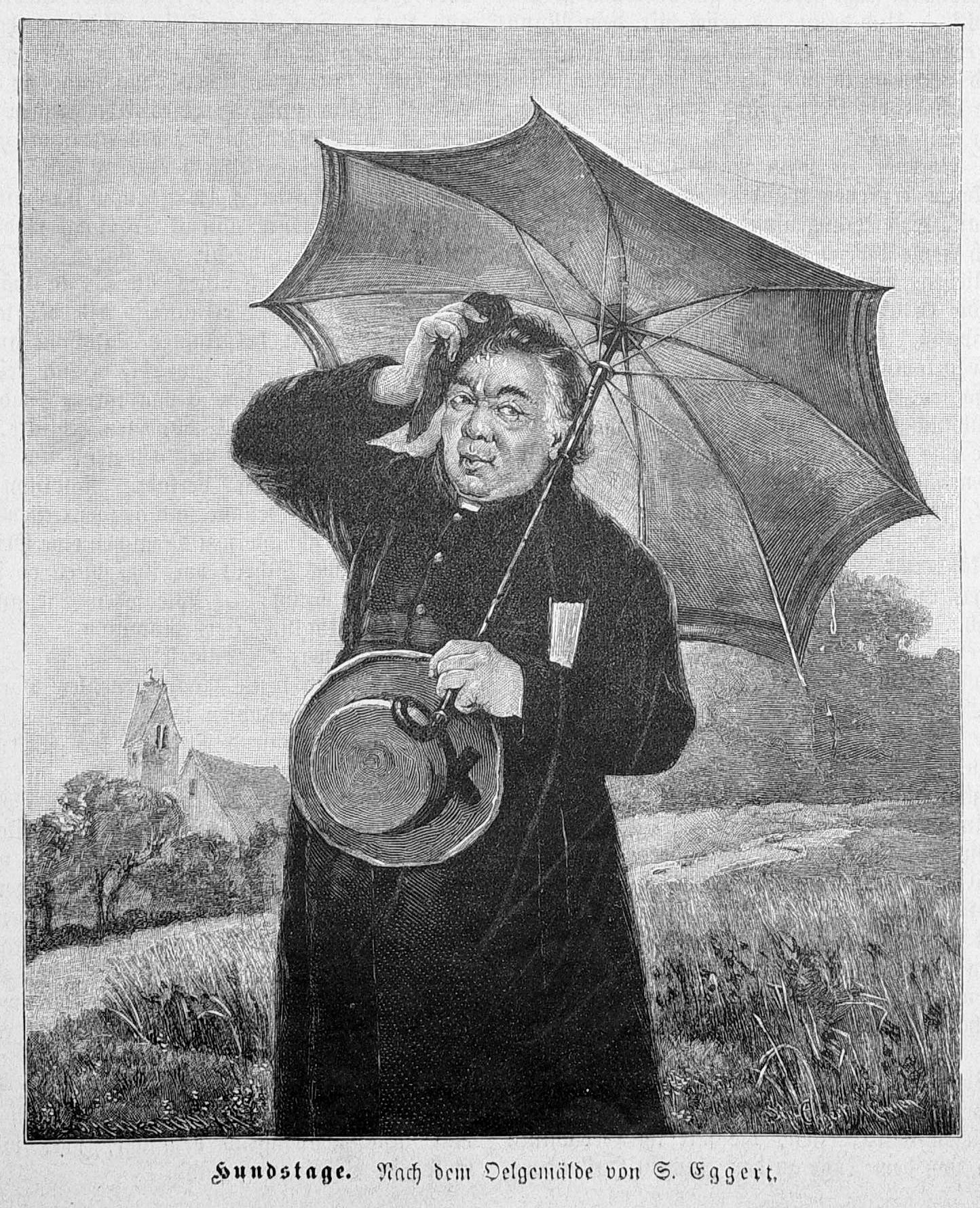 I never thought I could learn to tolerate spicy food, let alone love it.

The very idea of enjoying a cup of hot salsa once seemed as unlikely as camping at the North Pole.

But recently – somewhere between spooning hot chili sauce on my rice during dinner and eating a piece of ‘scorpion cheddar’ from the sample bin at Whole Foods (complete with warning label “eat at your own risk”) – I began to ponder my path towards eating food high on the Scoville scale. 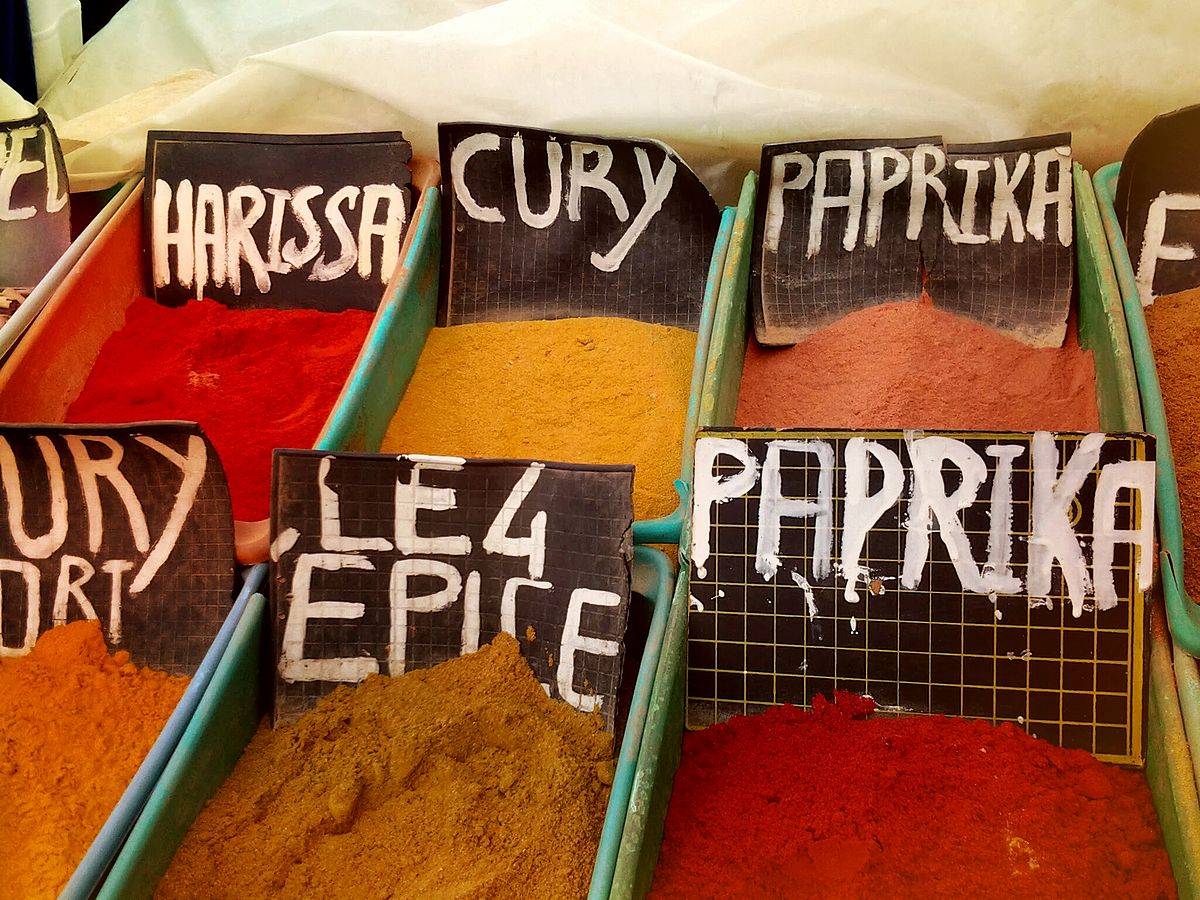 What is the Scoville Scale?

Think of it as a game of Mercy… for your mouth. The Scoville scale was developed in 1912 by a man of the same name – Wilbur Scoville. At first sugar water is given to trained testers. Then, little by little, the hot part of the pepper (a.k.a. capsinoid extract) is added to the water until the testers feel the heat. 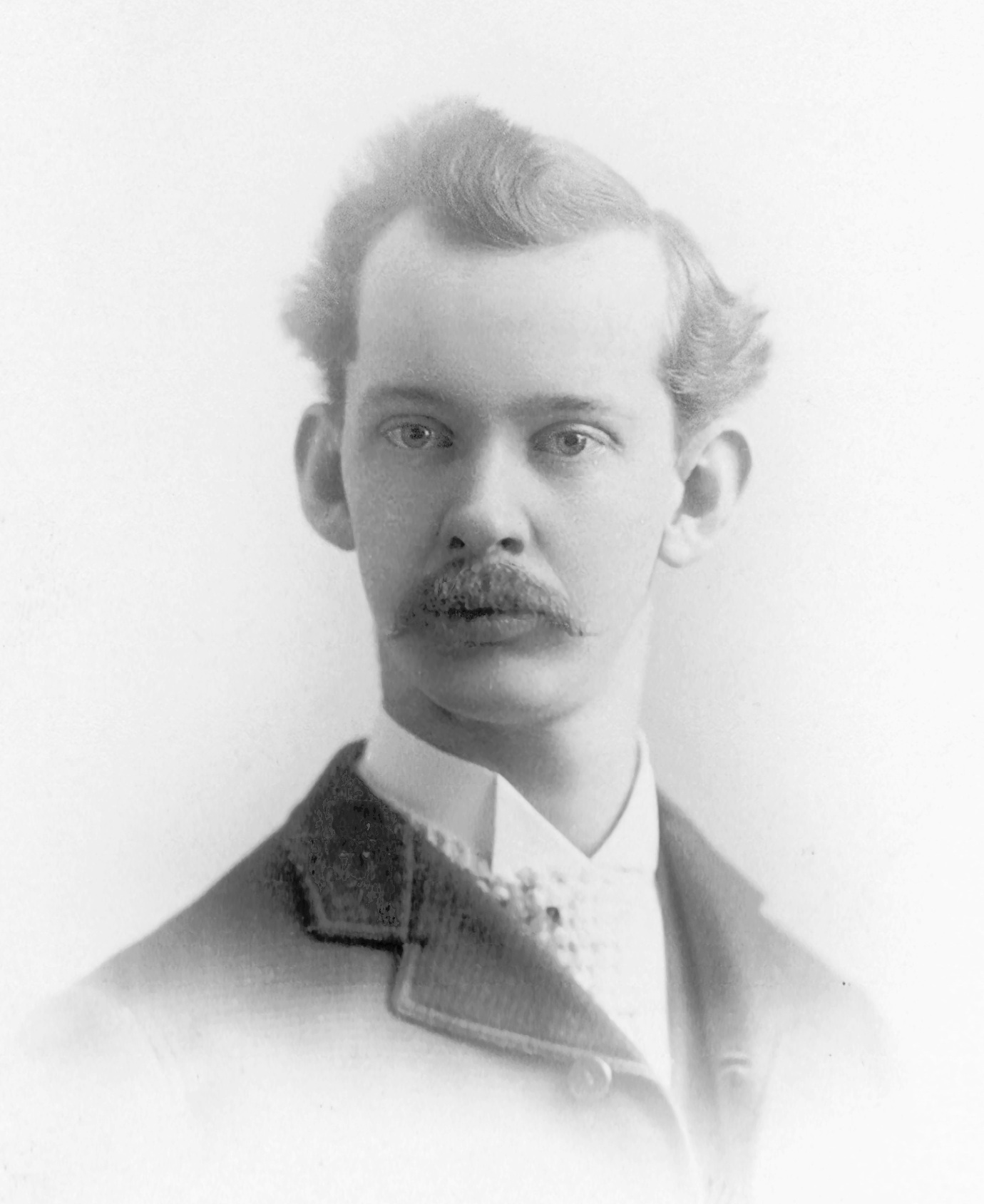 For reference: Bell peppers have no heat, while a pepper called the Carolina Reaper tops the charts at 2,200,000 Scoville heat units.

That Scorpion cheddar I nibbled?

It’s way hotter than a Habanero. For a few years it was rated the hottest pepper in the world by Guinness World Records at 1,463,700 Scoville heat units. Today it rates just below the Carolina Reaper.

It made me cough, but I went back for more. 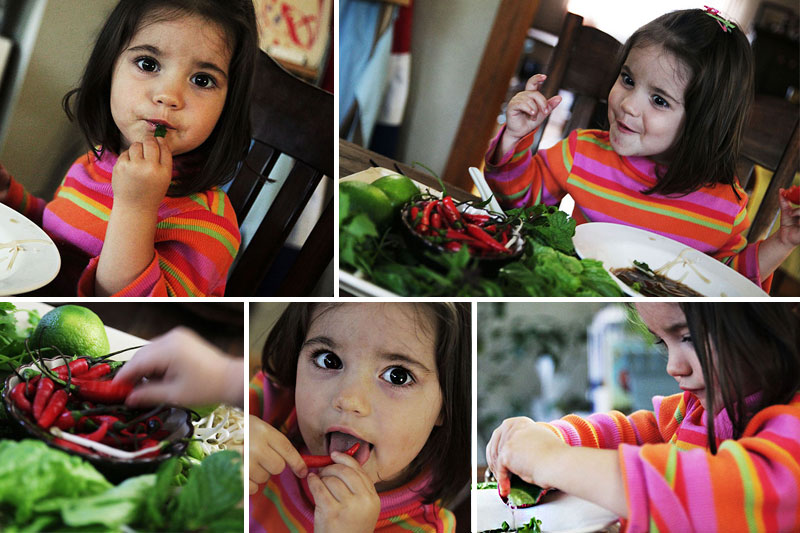 Unlike my daughter, pictured above, I didn’t grow up eating spicy food. Mom’s cooking had great flavor but the spiciest dish we ever ate was chicken paprika – mostly mild thanks to the cooling effects of sour cream. Living in Europe as a teenager did little to change things; France and Luxembourg are not known for their use of chili peppers.

So it stands to reason that when I began cooking a meal from every country in the world during my early 30’s I had a relatively sensitive palate. Back then I swore a scant 1/4 teaspoon of cayenne pepper in a large batch of food was enough to make me sweat. Given my age, I had good reason to think it’d always be that way.

Heck, according to the New York Times:

For the uninitiated, a relatively mild hot pepper can seem intolerably strong and truly hot peppers may even cause blistering of the lips and palate. (Source)

But I was wrong.

HOW TO BUILD YOUR TOLERANCE FOR SPICY FOODS

Every continent has something to teach us about learning to love spicy food. Here 7 of my favorite lessons learned while cooking the world. 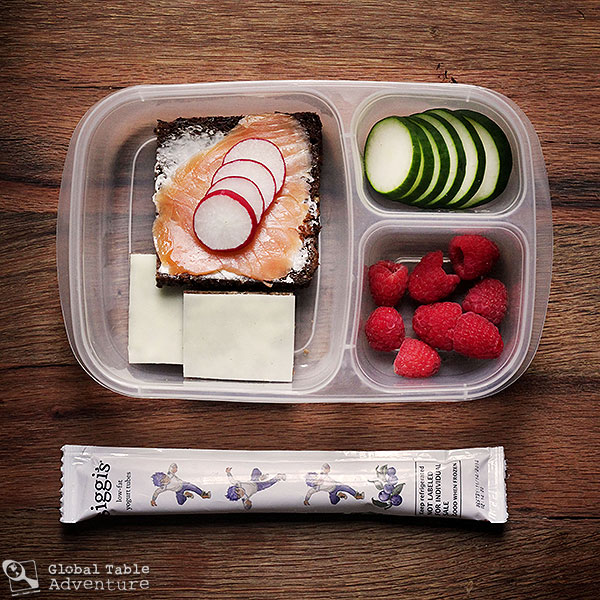 While Europeans are not known for their use of chili peppers, they are known for using raw “heat” in their food. Take these classic European combinations, for example:

Building raw heat is a great place to start for sensitive palates because the “burn” is mild at best (and doesn’t inflict actual pain the way chili peppers can).

If you find these ingredients too pungent (a.k.a. stinky), slice them extra thin and remove some of their bite by adding them to a glass of cold water for 30 minutes. As for spicy mustard, a thin spread goes a long way! 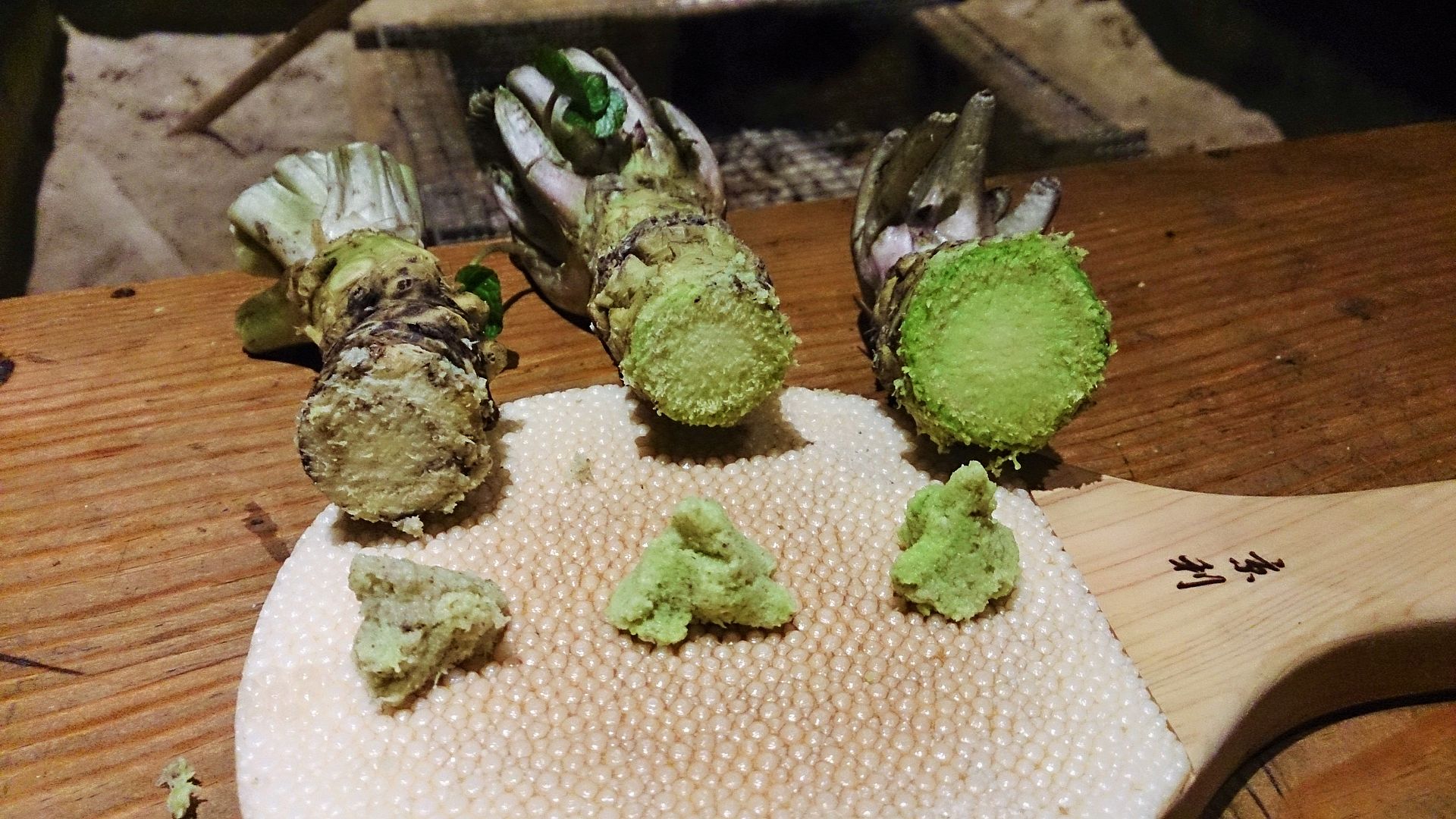 PRO TIP: If chili peppers hurt your taste buds, try the green mound of wasabi sitting next to your sushi.

The burning sensation from wasabi (a.k.a. Japanese Horseradish) is a short-lived flare up. The “pain” concentrates in your nasal passage (making your eyes water and nose burn more than your mouth). 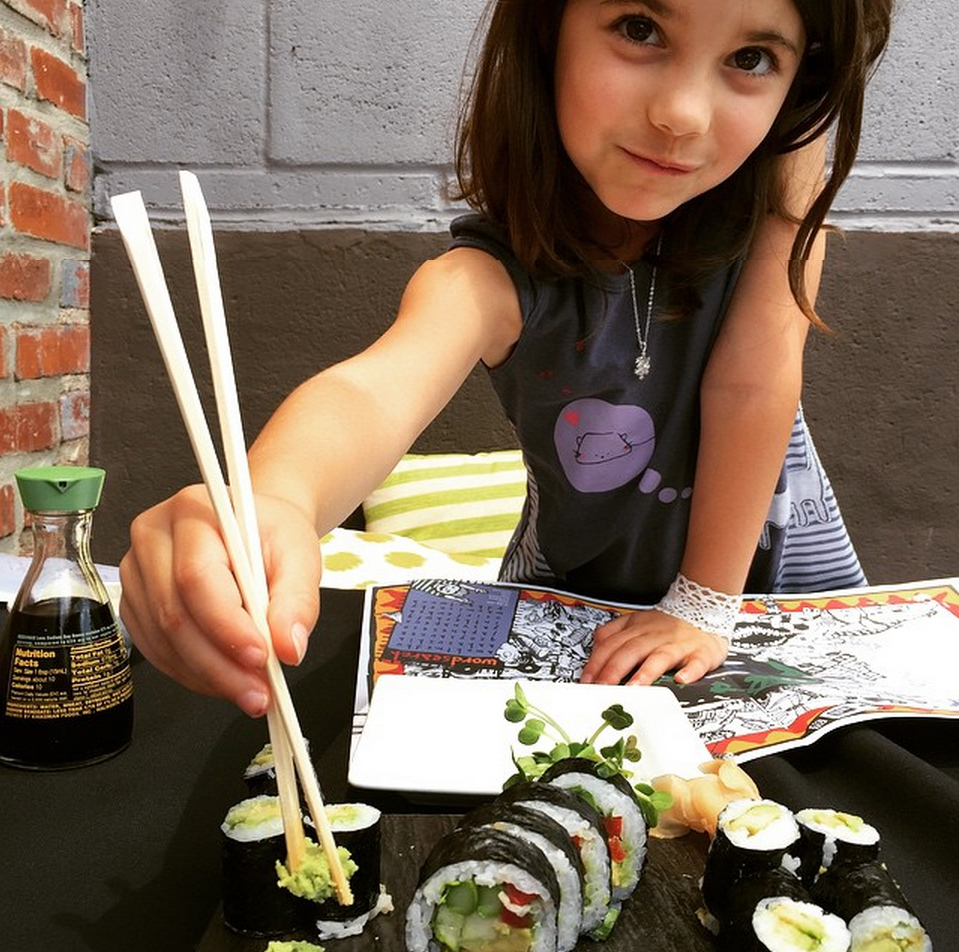 Over the last several years I tripled my wasabi intake and learned to enjoy the ephemeral pain… not in a sadistic way, but rather in the way that every melody benefits from a little crescendo. Even my six-year old daughter goes heavy on the wasabi because she now trusts that the pain will end.

3. Grow your tolerance bite by bite 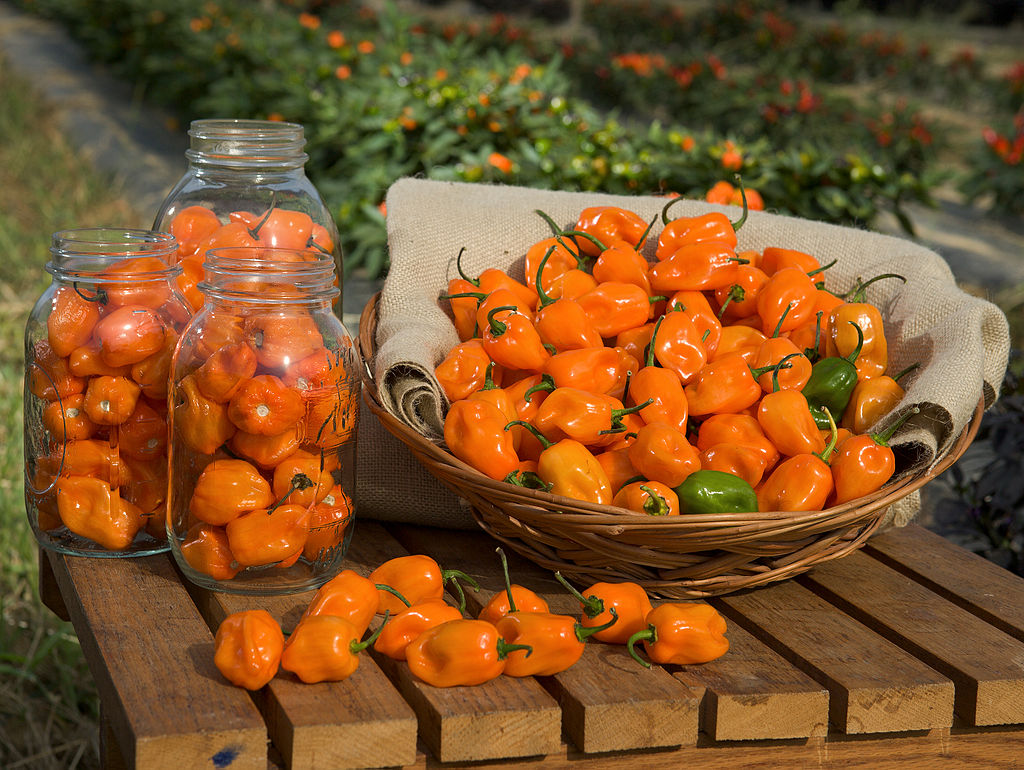 I once saw a grown man eat a couple of whole Habanero peppers on a dare. His face turned red and sweat pooled on his forehead. Then he got sick to his stomach.

I don’t get that all or nothing mentality.

Taking enormous spoonfuls of spicy curries will backfire if you have a sensitive palate – likely turning you off spicy food indefinitely. Take a cue from Bhutan: even though spicy peppers are so commonplace to be considered a main course (see ema datshi for example), hot peppers are not one of baby’s first foods. 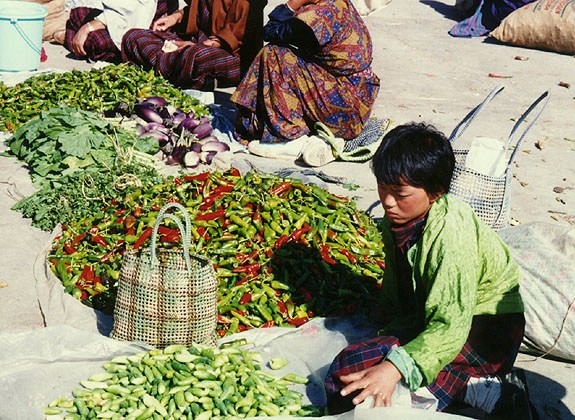 Instead mothers help their babies grow accustomed to the heat by serving them foods in spicy sauces… but here’s the key: They “baby bird” the food into their kid’s mouth.

Bhutanese eat chilli raw or cooked, minced or roasted, but no Bhutanese dish is complete without ema. And young toddlers are initiated in the art of chilli eating early on. Parents pick meat or vegetables from the chilli dish, suck it to moderate the heat, and then feed their child, who breaks into a sweat but quickly adapts.

Here’s the win: The amazing flavor remains … but with tolerable heat levels.

TRY IT AT HOME: Dig a hunk vegetable or meat from your curry and tap it on the edge of your bowl. Let the offending sauce drip off or consider dunking the hunk into a small bowl of water to rinse it further. 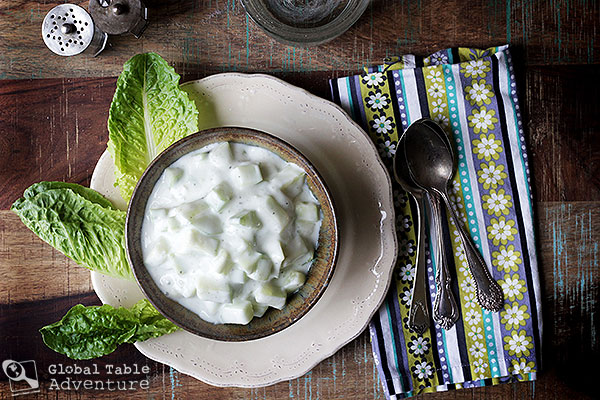 Ok. So you’ve bitten into something a little spicier than you’d like. Your eyes are watering and you’re certain your irritated taste buds will never recover.

Here’s the good news: Just about any spicy dish can be tamed with a heaping dollop of plain yogurt (or perhaps one of these yogurt based recipes). Over the four years it took to cook the world, yogurt was my go-to way to help lessen the pain of a good spice burn. Not only is yogurt cold but it contains a protein called capsein that helps neutralize the kick from the capscaisin in your food.

Thanks to this tip, my daughter was able to enjoy a very spicy Ethiopian dish called doro wat (she’s vegetarian so she limited her tasting to the hard-boiled eggs and a bit of the screaming-hot sauce. Every bite was followed (hastily) by a spoonful of yogurt.

Sour cream and crema in Latin America works the same way, for the record. 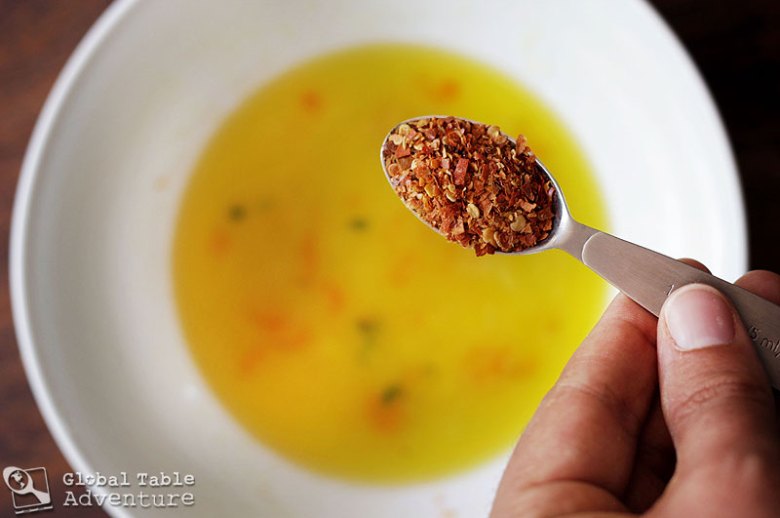 As I cooked meals south of the Sahara I noticed the pervasiveness of spicy food.. in everything. Well, maybe not everything. But hot peppers made their way into most meals – from groundnut soup to several recipes including piri piri sauce.

Here’s the 411: The more spice you eat, the more accustomed to it you’ll get.

After four years and 195+ countries I have a much higher tolerance for spicy food. While I still don’t like eating foods so hot that I can’t taste anything, that threshold is higher now. If I were to stop eating spicy food for 4 years I guarantee I’d be back to square one.

Eating spicy food is a skill you must hone, no different than playing the piano or practicing calculus.

Use it or lose it.

6. Find the right pepper for the job 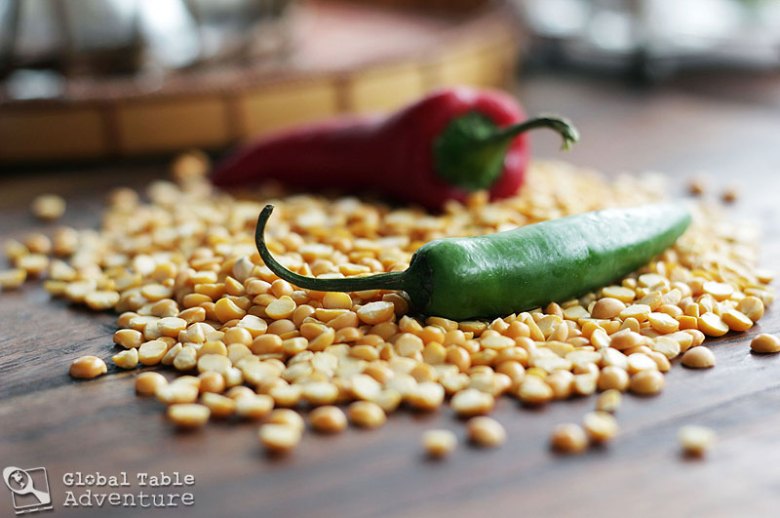 There’s no reason to jump straight into eating Carolina Reapers.  In the beginning I ate a lot of recipes with Poblano peppers – they were plenty spicy for me. Gradually I moved through the Scoville ranks – the occasional Jalapeno, Anaheim, or red Fresno all helped me build tolerance. In any recipe calling for a hotter pepper, feel free to substitute something more mild.

PRO TIP: If you’re not sure what pepper to choose, ask the grocery clerk. Most good stores will have a produce specialist on hand to help you. 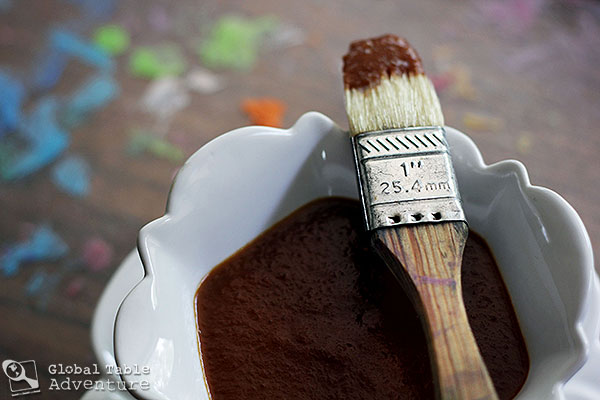 Ever hear of adding chocolate to a pot of chili? What about sweet and spicy barbecue sauce on a rack of homemade ribs? Throughout North America you’ll find sugar being used to balance the heat in spicy dishes. If you accidentally go overboard, try adding some to your dish. It’ll help.

In Oceania and India I’ve seen fruit used in curries – another great way to sweeten the dish and give your smarting taste buds some relief.

PRO TIP: Sugar or fruit takes the edge off of spicy food

You’re now equipped to embark on a mission to try more spicy foods. With these tips, you’ll be well on your way to learning to love spicy food… with minimal pain to your tastebuds.

Of course, these are just the tricks and tips I’ve learned over the years; let me know in the comments if you have additional ideas!