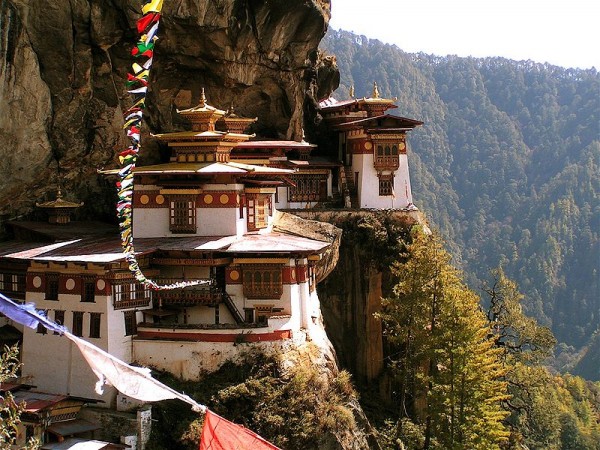 The rugged mountain-country of Bhutan is nestled in the Himalayas, between India and China. This largely vegetarian country is known for eating chili peppers (called ema) and rice in abundance.

Just reading about their food made me break into a sweat. They actually treat the chili pepper as a vegetable, instead of a minor spice component to a larger dish. In other words, in many cases, the chili pepper is the meal.

To a Bhutanese, however, ema (chilli) enjoys an exalted culinary position. It isn’t just a food or a fad. It is the stuff of life. It is integral Bhutanese heritage and culture.

It’s not just the vegetable; it’s the taste. A bowl of black dhal or a cauliflower sabzi in a diner in India is likely to contain some chillies, and would be considered very hot by most people there. But that, as every Bhutanese who has studied in India would vouch, is piddling compared with the blistering fury of a highland Bhutanese chilli. But it is not raw heat that makes Bhutanese chillies distinctive. It is their incomparable sharp flavour, which some describe as succulent and earthy, with a clarity that seems to reflect the taste and smell of the skies and landscapes of Bhutan.

Bhutanese eat chilli raw or cooked, minced or roasted, but no Bhutanese dish is complete without ema. And young toddlers are initiated in the art of chilli eating early on. Parents pick meat or vegetables from the chilli dish, suck it to moderate the heat, and then feed their child, who breaks into a sweat but quickly adapts.

I smiled when I read the last paragraph because this is exactly how we share spicy food with Ava. I often feel like a mamma bird and, although many people probably find the habit revolting, I believe this is the simplest way to give her a variety of food that does not include bland “baby food.” I’ve often wondered if there was a better way, but am glad to learn the the technique is the same in countries like Bhutan with incredibly spicy food.

The most interesting recipe I found for chilies is from Choden’s book Chilli and Cheese. She tells the story of her father filling green chilies with butter and salt, then grilling them on skewers until tender. I find such straightforward cooking appealing because, in simplicity are pure flavors celebrated.

The most common recipe with chilies is the screaming hot Ema Datshi, the national dish. This cheesy, chili infested sauce is considered a vegetable curry that makes a complete meal with red or white rice (or, in central Bhutan, buckwheat noodles or pancakes). According to an interview with a local chef by the BBC, real Ema Dhatsi is made with just two ingredients: equal parts cheese and chili peppers. Other ingredients, such as tomatoes, onions, and cauliflower, can be added to reduce the heat (but this is usually only done for foreigners).

The curry in Bhutan is called “white” because they do not include yellow spices, like turmeric. For non-vegetarians, meats are also served in curries, often with radish or mushroom. Popular meat in Bhutan includes beef, pork, and yak (yak is also used for cheese), although chicken and fish are also consumed.

For dessert Bhutanese usually cool things off with fresh fruit such as watermelon and mango. This is sweet relief after a blazing hot meal. They also enjoy tea, especially suja, or “butter tea,” a salty mixture of black tea, butter (traditionally yak butter), and milk. In the capital, cakes, eclairs and cream puffs are becoming popular.