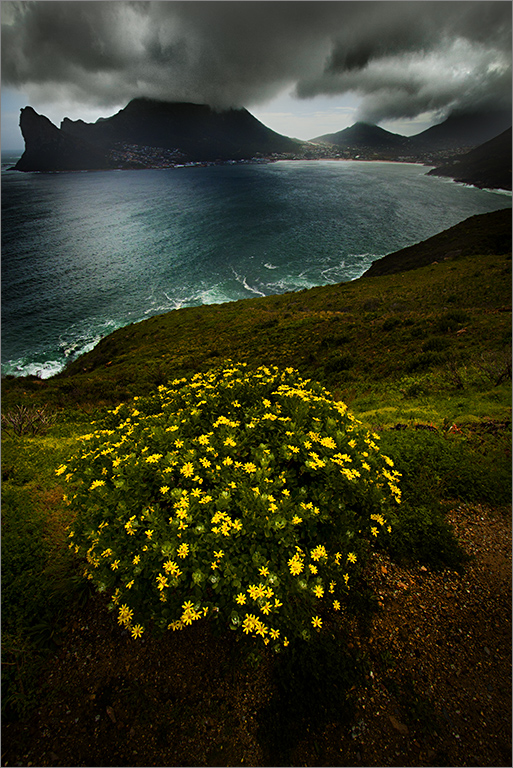 Chapman’s Peak is a mountain and famous drive on the western side of the Cape Peninsula, 15 km south of Cape Town, South Africa. Photo by Hein Waschefort.

Almost since the beginning of this Adventure I’ve been looking forward to our week in South Africa. I’m not sure why – certainly the fairy tale mountains that tower above the white-capped ocean is one part of it.

As is the bustling city centers and even the dry interior. 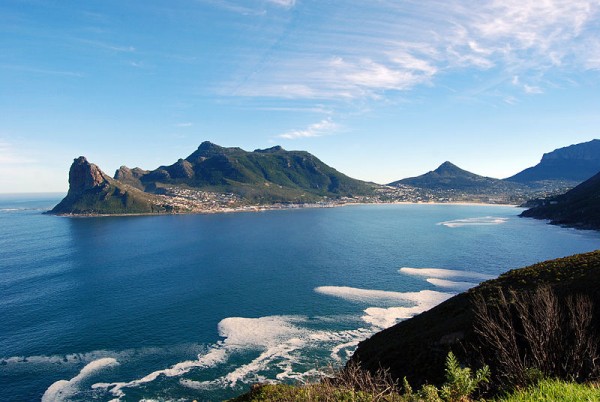 Chapman’s Peak is the name of a mountain on the western side of the Cape Peninsula, about 15 kilometres south of Cape Town, South Africa. Photo by Harvey Barrison. 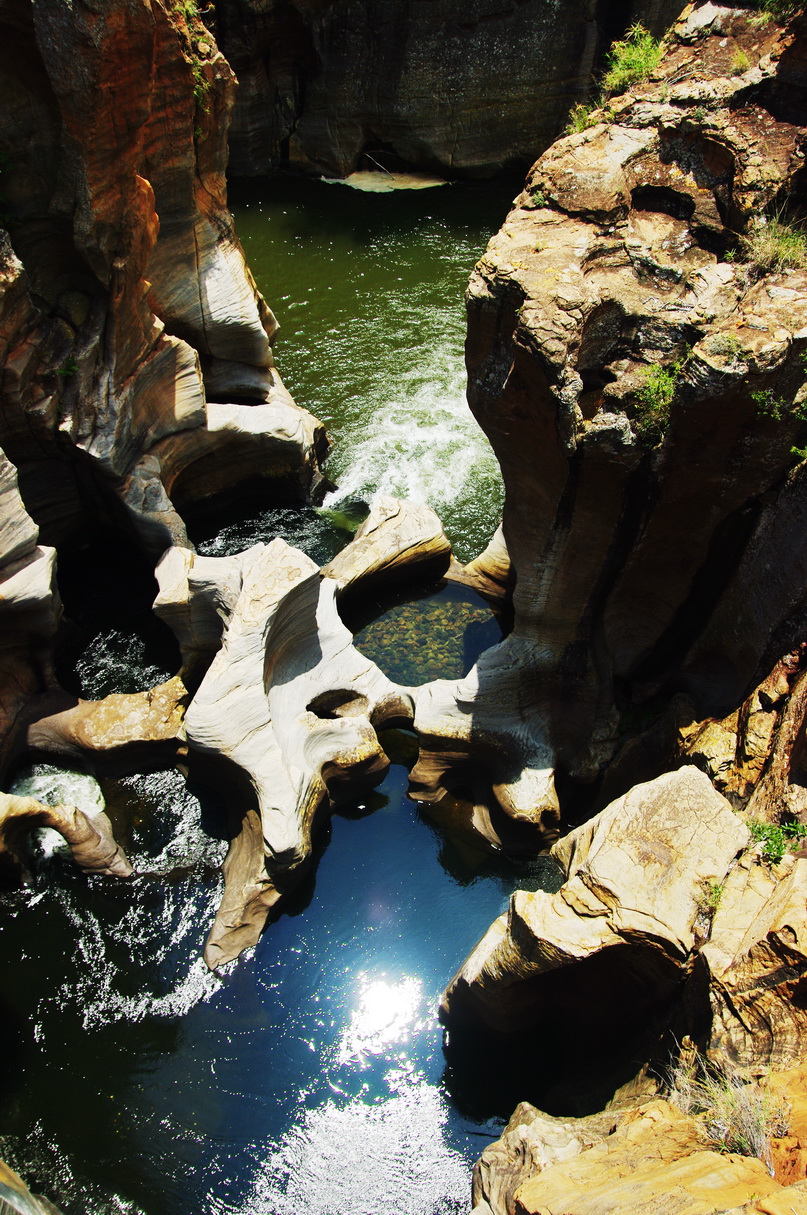 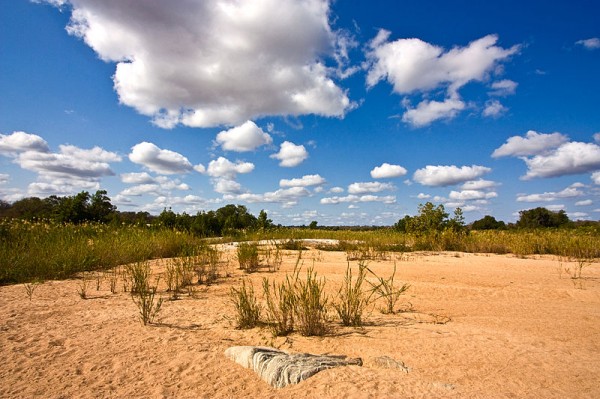 But another is that my dear friend Janine is from South Africa.

Whenever Janine speaks of her homeland, she gets a dreamy, lost sort of look about her face.

She only goes back every 5-10 years, so South Africa remains a palatable slice of her childhood… representing her former youth and vigor, all wrapped up in memory… often more dream than reality. 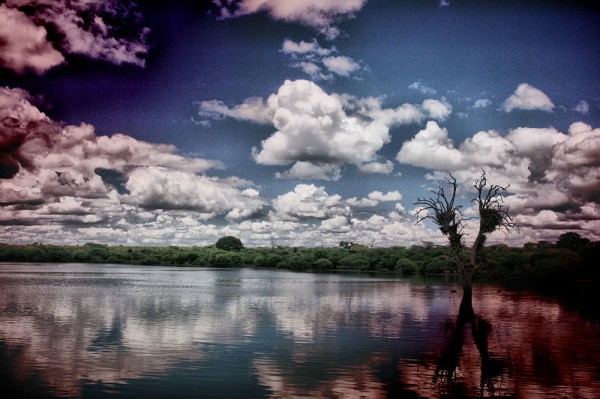 View of a dried out river bank in the Sabi Sabi Game reserve. Photo by Bruce Salamon.

Janine tells me the food is heavy on the meats, especially grilled meats. Considering she’s a vegan, I was surprised when she asserted that I couldn’t “visit” South Africa without having tried some form of their meat. She said “they love their meat” and that almost every meal includes some, particularly in the cities.

The funny thing is, while they certainly love their kabobs and steaks, they cook just about anything on the grill, from the famed bobotie casserole [Recipe], to grilled rolls called Roosterkoek, often served with anchovy butter (how fun is that?), to entire heads of cabbage stuffed with cheddar cheese and bacon (not exactly something I’d pictured in South Africa, but something that has me hankering for a warm day so I could try it out).

Outdoor cooking is simply a way of South African life. 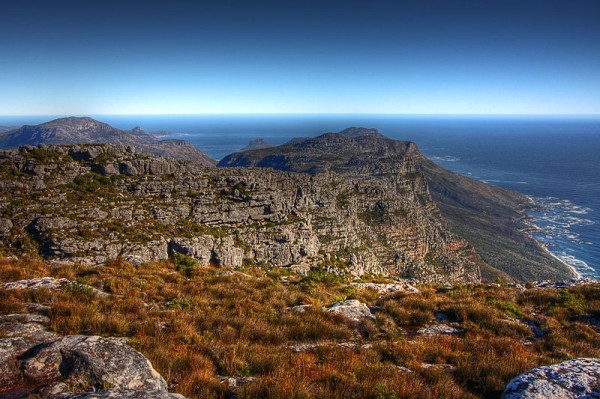 Most dishes go swimmingly with yellow rice [Recipe], seasoned with turmeric and sweetened with dots of raisins throughout. From the recipes Janine shared with me, Indian spices are throughout South African cooking. Ginger, garlic, curry, coriander… and so on. Also similar is their love for chutneys, especially apricot or even mango, as we made for our Namibian Global Table [recipe].

More traditional dishes include Melkkos, which is a cinnamon and flour porridge made with milk. Janine said it’s popular any time of day, but especially breakfast. Then there’s Miele Pap, a porridge made with cornmeal and water and served with chopped tomato and onion relish. 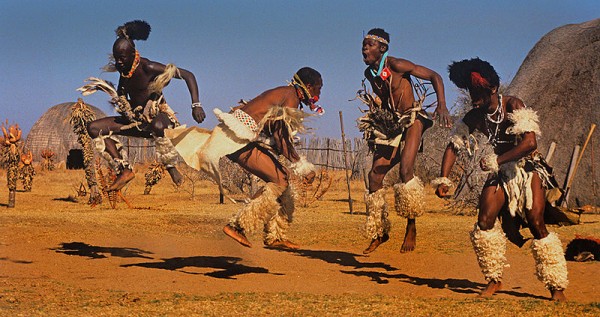 Many African dances involve jumping including ritual dances of the Zulu. In the background are the typical traditional Zulu huts and vegitation (aloes) of the higher regions of Kwazulu Natal, South Africa. Photo by Hein waschefort.

The desserts are simple, yet divine. There’s the fingerlickin’ braided ‘donuts’ which get dipped in an orange syrup – you can find these ‘koeksisters’ in nearly any bakery. Then there’s milk tart, made with milk, eggs, and sometimes a crust. Puddings are an eternal treat, including Malva pudding made with apricot jam and vinegar. It’s quite the flavor blast when combined with a spoonful of custard cream.

The most interesting by far, however, are the drinks. Just as with Lesotho, they enjoy their Rooibos [recipe]. And then there’s this other drink… that makes elephants all kinds of drunk [Recipe].

You’ll have to come back later this week to learn more about that. 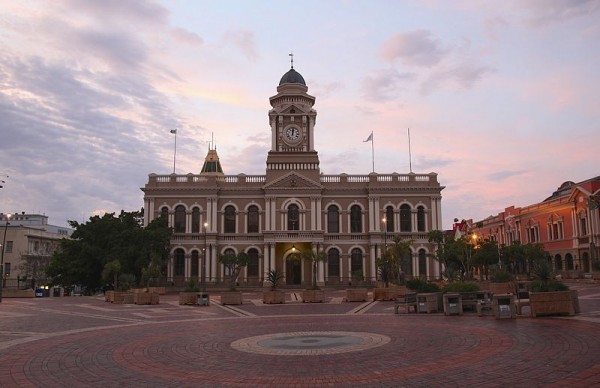 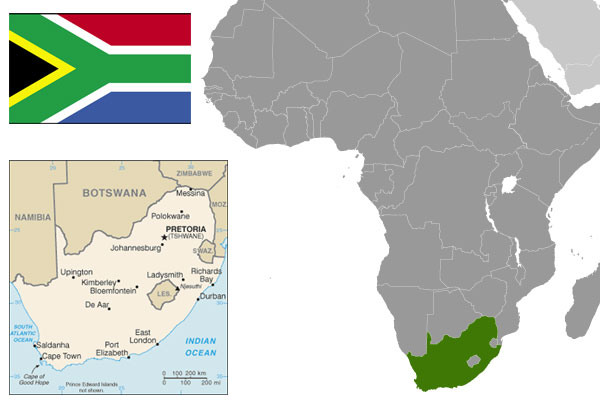 So, friends, I’m curious. What’s the closest you’ve been to this beautiful country?

For me, Tunisia, which is still a world away.