I’ve been digging in the dirt lately, planting tomatoes, peppers, cucumbers, and peas. This is not the first year I’ve gardened, but this is the first year my seedlings survived long enough to be planted in the ground. Last year, out of 48 seedlings, only one lived long enough to eat from. Parsley. The rest died because I planted my seeds too early and was forced to wait to put them in the ground. Without adequate sunlight the seedlings became gaunt and gave up the fight long before they hit 2 inches.

This year I became neurotically obsessed with the weather. I waited patiently to plant my seeds until just a month before all danger of frost passed. Things are looking good; I just put the seedlings in the ground. They’re thick and hardy; I’m hopeful for this year’s harvest, although I remain at the mercy of mother nature.

Experiencing firsthand how temperamental and fragile vegetable gardening can be gives me an understanding of why so many cultures mark the changing seasons with festivals and rituals. In Azerbaijan they still celebrate the first day of spring with a 4-week long festival called “Novruz.”  Most households prepare for Novruz by initiating a massive spring cleaning and preparing their vegetable beds. The festival includes elaborate meals, games, and costumes. Businesses shut down for up to a week during this official holiday.

Azerbaijani have good reason to celebrate the spring. Winters are long and cold. Most homes only have one heater which is not enough to heat the entire house. If the weather is bitter outside, you can bet it is bitter outside. Imagine desperately waiting for the sun to warm the earth enough so that you don’t have to white-knuckle your wool blanket at night. You’d be celebrating, too!

The Novruz table is adorned with sprouted wheat, decorated eggs (one for each member of the family), and special dishes made from local foods. Not much is imported (or exported). 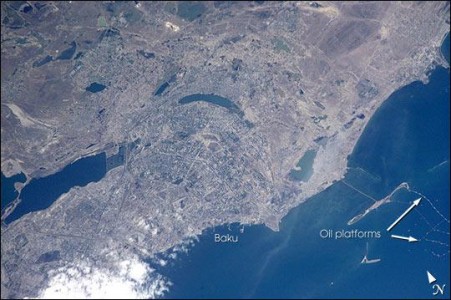 What do Azerbaijani eat?

In Azerbaijan, locals purchase food fresh from markets, or grow it nearby.

Azerbaijanis are noted for being long-lived (many over 100 years old), which is attributed to their healthy diet of yogurt, apricots, and fresh foods.

The World Cookbook For Students, by Jeanne Jacob and Michael Ashkenazi

Here is a lovely description of the markets by Linda of Linda in Azerbaijan from March 2009:

The market in my town is amazing. It covers about four square blocks with huge quantities of lush, beautiful produce. This time of year, there are mountains of shiny, plump tangerines from southern Azerbaijan, cartloads of apples from northern Azerbaijan, every kind of winter vegetable you can imagine, the most beautiful spinach I have ever seen, and loads of freshly cut herbs.

There are stalls of freshly made yogurt, homemade cheeses and sausages, dried and fresh spices. Beautiful dried apricots, figs and prunes are displayed. The food is organically produced, but is not professionally certified, so is not technically organic. The food is inexpensive and mostly does not come in packages. Do you want yogurt, milk or cottage cheese? Bring your own buckets. Do you want eggs laid yesterday? They will be put into a small plastic bag instead of a carton. Round loaves of bread are stacked without any covering. As a result, Azerbaijani families generate very little trash.

The cuisine is a blend of Mediterranean, Middle Eastern, and Indian. The most characteristic foods are rice dishes such as plov, pilaf with kazmag (a crust) [Recipe], and other pilafs. Rice is served with stews, stuffed cabbage/grape leaves, or meat kabobs (usually lamb or chicken) [Recipe]. Meats might even be marinated in pomegranate juices [Recipe]. In small towns the food is much simpler. They serve yogurt with mint for soup, cooked with eggs as a standalone dish, and as a dip. Yogurt or cheese with lavash (flatbread) is a popular combination. All sorts of seasonings are used, including mint, parsley, dill, basil, onion, garlic, pomegranate, fennel, and sumac.