“The smell is making my eyes water. One bite, and I can’t get the flavor out of my mouth! It’s like I’m still eating it. That counts, right?”

Keith looked at me with his best puppy dog eyes. And, since his eyes are hazel, he didn’t look much like a puppy.

“I can’t,” he replied, turning his plate so the Babenda was as far away as possible.

I kept eating, thinking about how fishy the Babenda tasted. Maybe he would eat some more of the unusual West African dish if I hadn’t tossed in so many dried anchovies. Or if he hadn’t seen me put them in. Maybe, just maybe, if we had some adventurous friends over, he might succumb to peer pressure and eat just a little more.

I took a big bite and  then gave Ava some.

Ignoring me, he picked up another lamb skewer, buried it in a blizzard of Kan Kan Kan and took a bite.

“Now these are good!” he grinned.

Sigh. This man knows how to melt my heart. Especially when he wants something.

Instantaneously, the lonely, rejected pile of Babenda is forgiven.

You win some, you lose some. 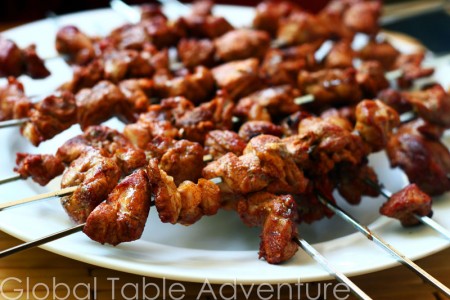 The best part of brochettes, besides how easy the kabobs are to make, is the slow, creeping heat that builds while you eat them. The burn stays manageable, never becoming intolerably “hot.” The sweet cinnamon lingers in the background, while mild paprika and bold cayenne take center stage. With just a bit of tang from the vinegar, this unusual combination is subtle enough to suit most palates.

Be sure that you keep a close eye on the kabobs – you want to cook them to medium or the meat becomes tough. Also, if you have different sized cubes of meat, be sure to put the small pieces together on some kabobs, and the large ones on another. Otherwise, they will cook at different rates. Finally, clean and oil the grill plates prior to grilling to avoid sticking. 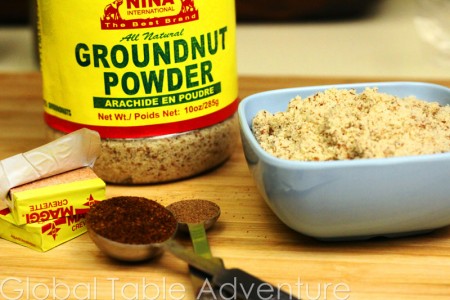 First of all, Burkinabe claim that Kan Kan Kan is an aphrodisiac (watch out Keith)! If that’s not reason enough to make this spice powder, there’s more good news. The blend assembles in a flash and tastes fabulous.

Peanut powder is made with raw peanuts, giving this spice blend a green, grassy background flavor. We made ours quite hot (for my husband). Dipping pieces of meat into the Kan Kan Kan made the meal fun and interactive. Keith used so much that he broke out into a sweat. He has a new alternative to his beloved Tony’s. Thank. Double. Goodness.

You have to go to a specialty market to find the Peanut Powder. We found ours at Tulsa’s Ebute Tropical Market. They have the maggi cubes there, too. Just make sure to check what flavor you get. It wasn’t until I set about making the recipe that I realized there was a shrimp on my maggi cube wrapper. Ew. Not that I have anything against shrimp, but it really doesn’t belong with lamb. I ran out and bought some powdered chicken stock (maggi cubes are just pressed stock cubes) and all was right with the world. 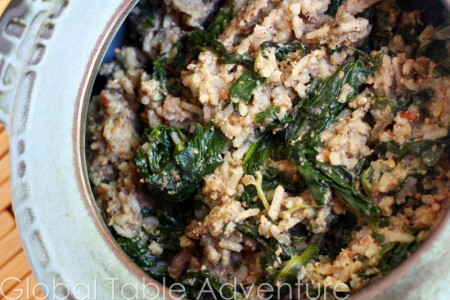 Babenda is a complete meal, containing spinach, rice, and a little fish (in the form of smoked anchovies).  Bonus! Trying fermented locust beans (soumbala) – was a treat. They smell pungent, like blue cheese, and give the dish that same tingly mouth-feel that you get from sharp cheese.

I think I went overboard with the smoked anchovies. Half the amount might be better, unless you love the little guys. This dish was probably Keith’s least favorite to date – he kept having to leave the kitchen (“for the smell”) while it was cooking. Oh well. Ava and I liked it just fine. 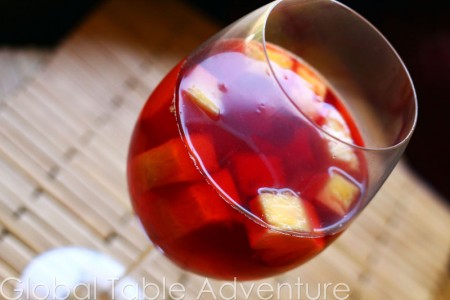 I love the bright, tart flavor of hibiscus with juicy pineapple (the pineapple I picked was laced with sweet magic – yum). Plus, this drink is beautiful and caffeine free!

To extract the flavor of the hibiscus, you have to let the flowers soak in the hot water for about 30 minutes. The time is roughly the same for the tea bags I picked up at the store. I don’t particularly mind (especially since I’d probably make this the day ahead for a party), but it does slow things down if you’re in a hurry.

Also, this drink is unsweetened. If you prefer a sweet drink, add some honey, juice, homemade simple syrup, etc. A particularly popular variation includes equal parts tea and lemonade (which is how Keith has been drinking the leftovers).

Ava showed Keith up big time, and ate a decent amount of the Babenda. She also tried the caffeine free hibiscus tea, but I think it was a little too tart. This video mainly shows her trying the lamb (with one spoonful of Babenda).