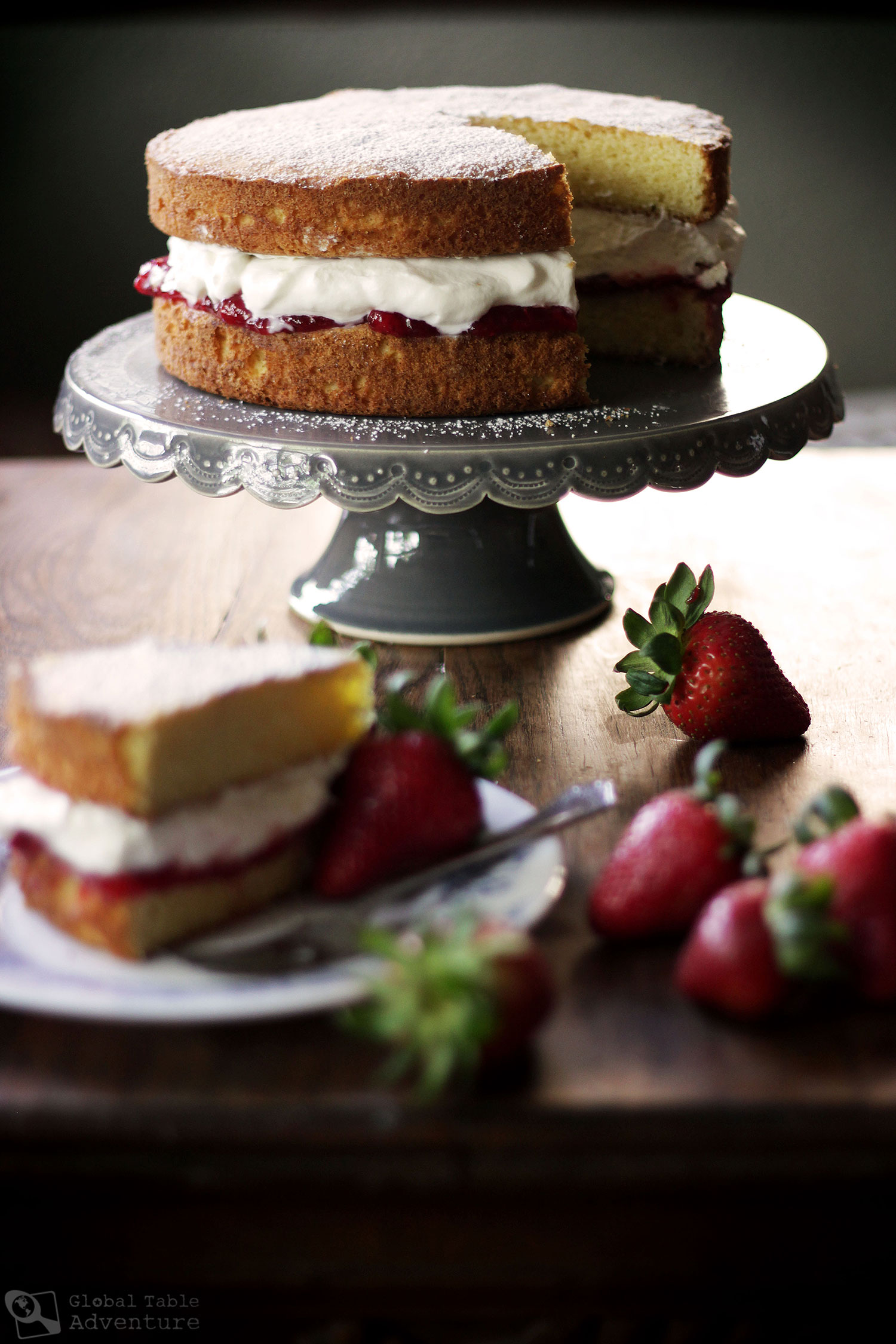 Imagine a cake good enough to eat upside down.

This Victoria Sponge Cake is 100% inspired by Mary Poppins – that lovable British nanny at the heart of  countless quirky adventures – and, yes, it’s that good. 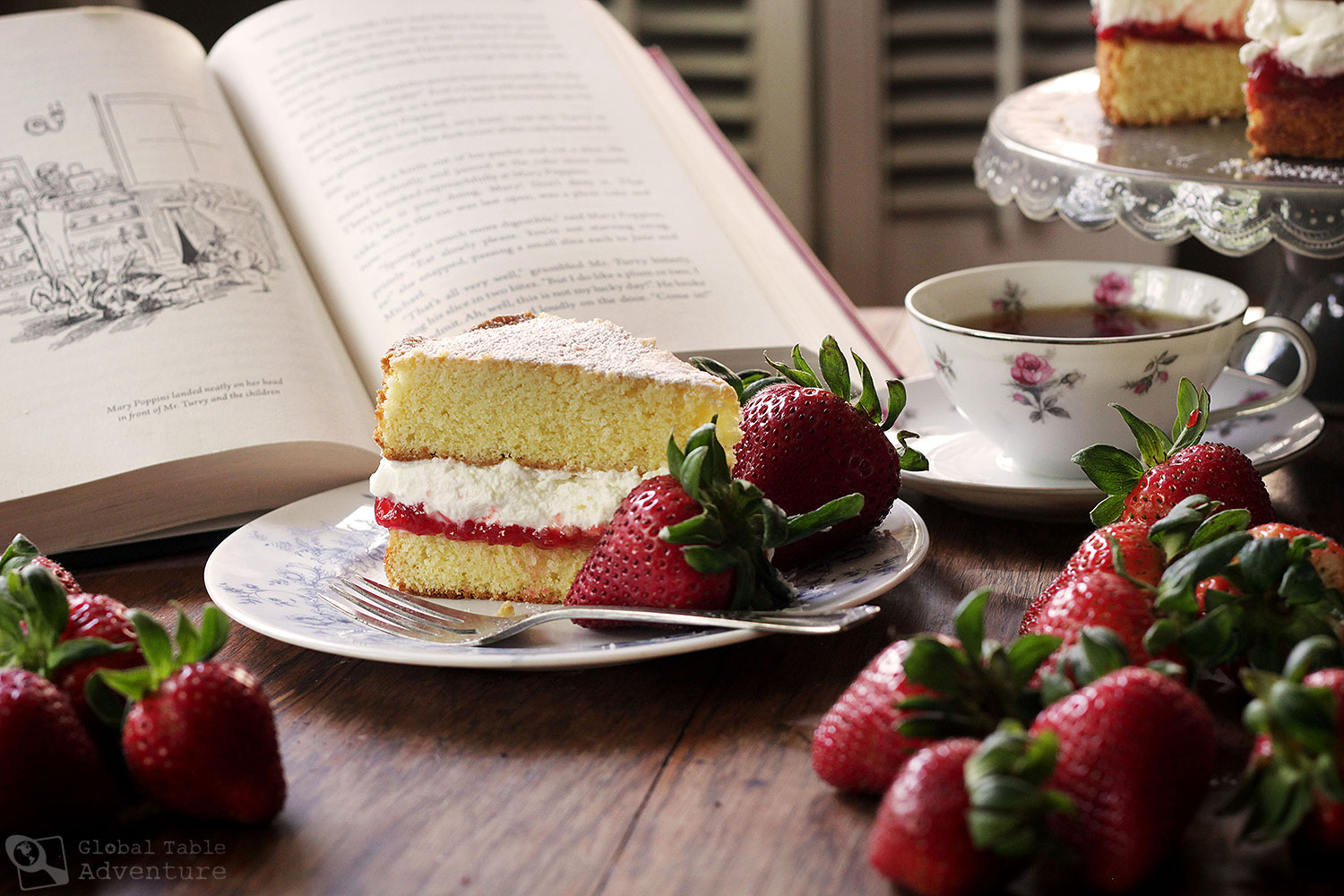 The recipe is mentioned in Mary Poppins: 80th Anniversary Collection, which I gave my daughter for Valentine’s Day.

A note on these books: P.L. Travers’s collection goes well beyond the parameters of the Disney movie – the floating tea party scene at the heart of the film can be found on page 42, barely cracking the spine of this 1024 page classic.

Every night at bedtime we settle into a new chapter, following the 5 Banks children on another adventure. They paint the sky, eat gingerbread stars, hang out with the constellations at a circus in space, and travel the world with a compass – and all that within the first few hundred pages. Mary Poppins not only never explains their adventures once they’re over, she insists she has no idea what the children are talking about. More than buttoned up, Mary Poppins is flat out strict, yet the children always have fun when she’s around. It’s in Mary Poppins Comes Back (the second book in the series), that Mary Poppins makes it clear that sponge cake is her cake of choice. She loves it so much, in fact, Mary pronounces her approval while floating on her head at an upside down tea party with Jane, Michael, and a man named Mr Turvy:

Turning their heads, Jane and Michael were surprised to see that the voice came from Mary Poppins’ parrot-headed umbrella, which was at that moment Catherine-wheeling towards the cake. It landed head-downwards on the tin and in two seconds had cut a large hole in it with its beak.

“There!” squawked the parrot-head conceitedly, “Polly did it! Handsome Polly!” And a happy self-satisfied smile spread over its beak as it settled head-downwards on the floor beside Mary Poppins.

He took a knife out of his pocket and cut a slice. He started violently, and peered at the cake more closely. Then he looked reproachfully at Mary Poppins.

“This is your doing, Mary! Don’t deny it. That cake, when the tin was last open, was a plum cake and now –”

Poppins’s insistence on proper behavior is comedic brilliance by author P.L. Travers … after all doesn’t floating on your head negate any need for proper decorum?

Not in Mary Poppins’s world. 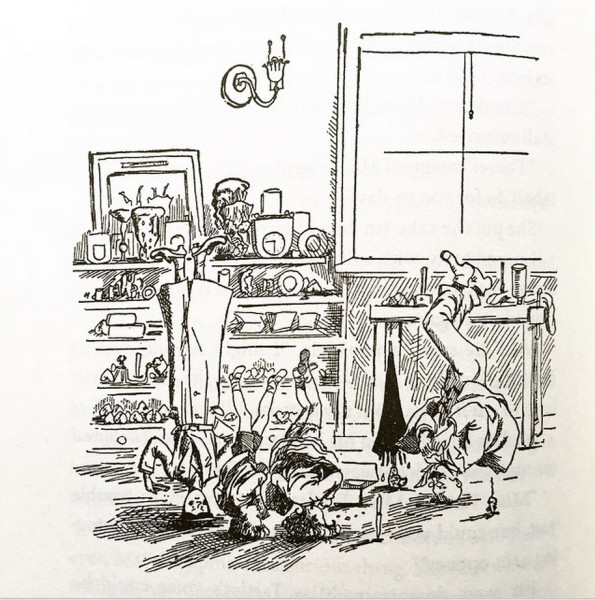 How to make Victoria Sponge Cake

Victoria Sponge Cake is named for Queen Victoria (1819-1901) who enjoyed a slice or two at teatime during the 19th century. This was the era when taking formal tea became the thing. Since the queen favored sponge, the dessert became synonymous with British teatime.

The mild cake is meant to be soft and spongy, hence the name. All you’ll need are a few pantry staples: flour, butter, sugar, egg, and levener – this simple cake requires no extravagance (most recipes, but not all, avoid vanilla extract and lemon zest). A plain, trim slice effortlessly makes a splash among fancier desserts on the tea spread, just as the girl-next-door shines sweetly among a gaggle of divas in stilettos. 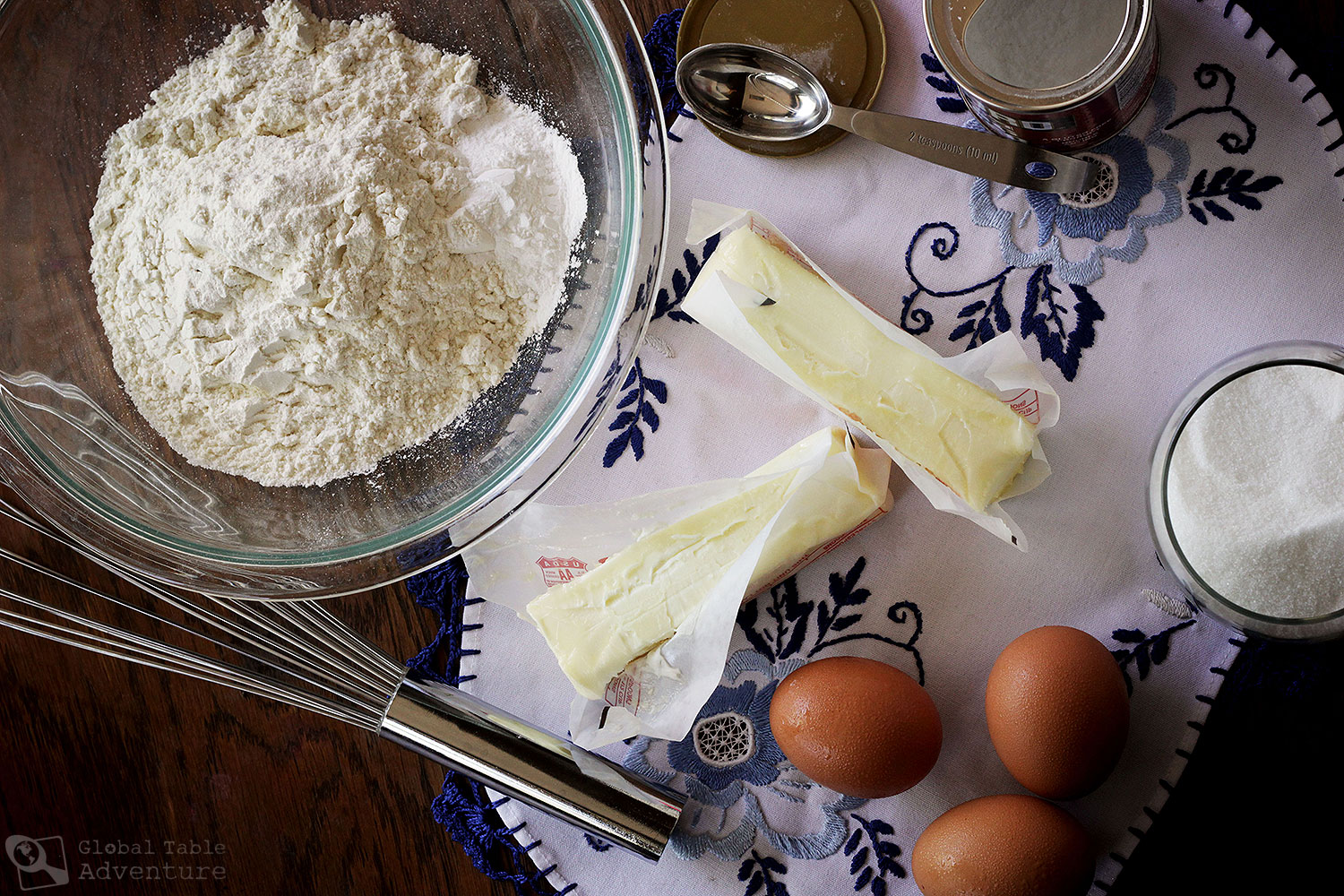 In Britain, many recipes stipulate that the sugar, flour, butter and eggs should be the same weight, based on the weight of the eggs. I made this version by the cup for folks who don’t have a scale handy (or don’t feel like pulling one out). You’ll need 4 eggs.

Room temperature ingredients make the fluffiest cakes, as does creaming together the butter and sugar for a good five minutes. 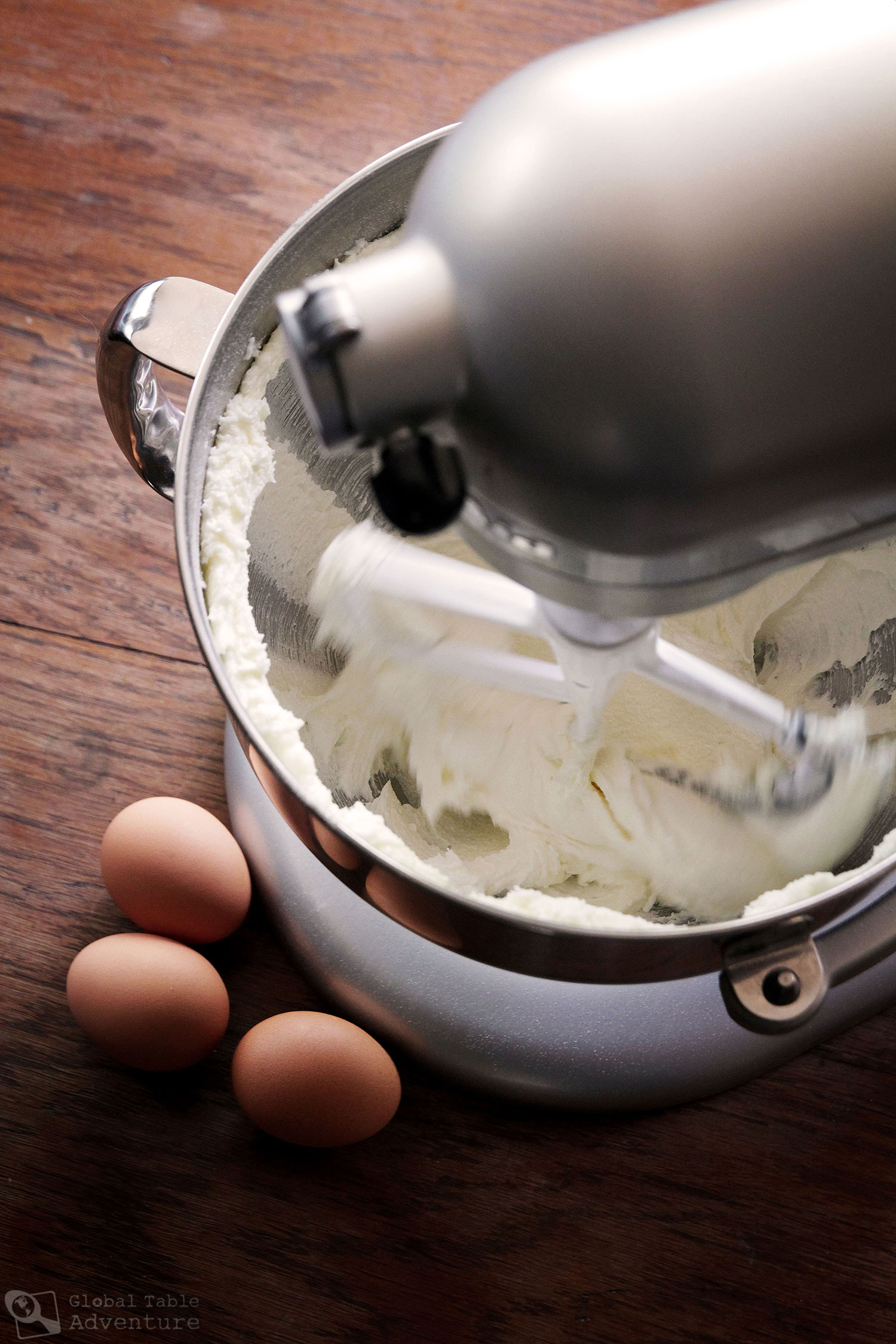 After creaming the butter and sugar together, alternate adding the eggs and flour to form a thick, luscious mix. A little milk makes it looser but not pourable. 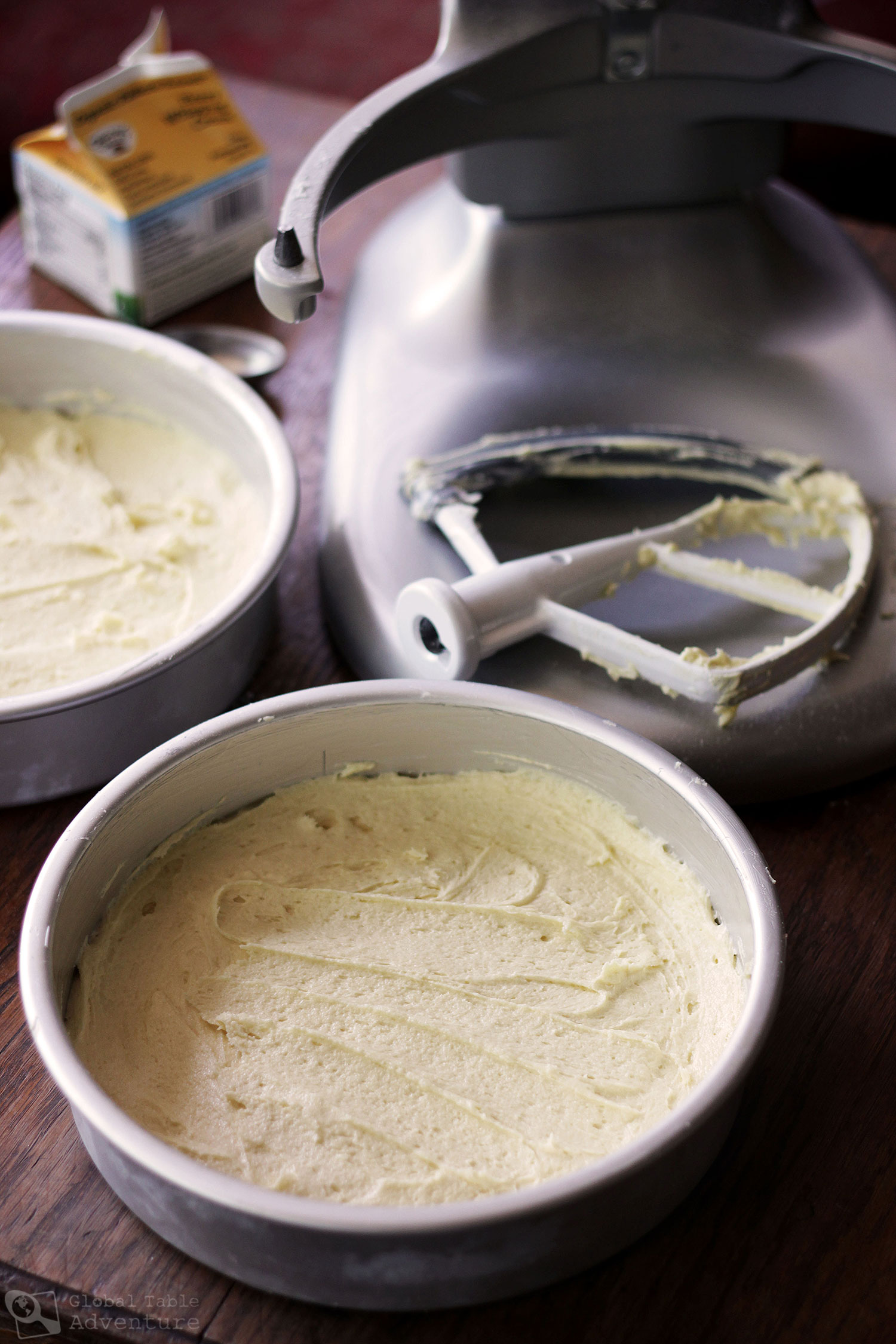 Finally, pop the cakes into a 350F oven (for a perfectly flat cake, use baking strips).

Once baked and cooled, I followed tradition and placed a thick layer of strawberry preserves and whipped cream between the cake layers (lemon curd is fabulous, too). Another not-exactly-traditional approach is to swap out the whipped cream for a layer of buttercream. 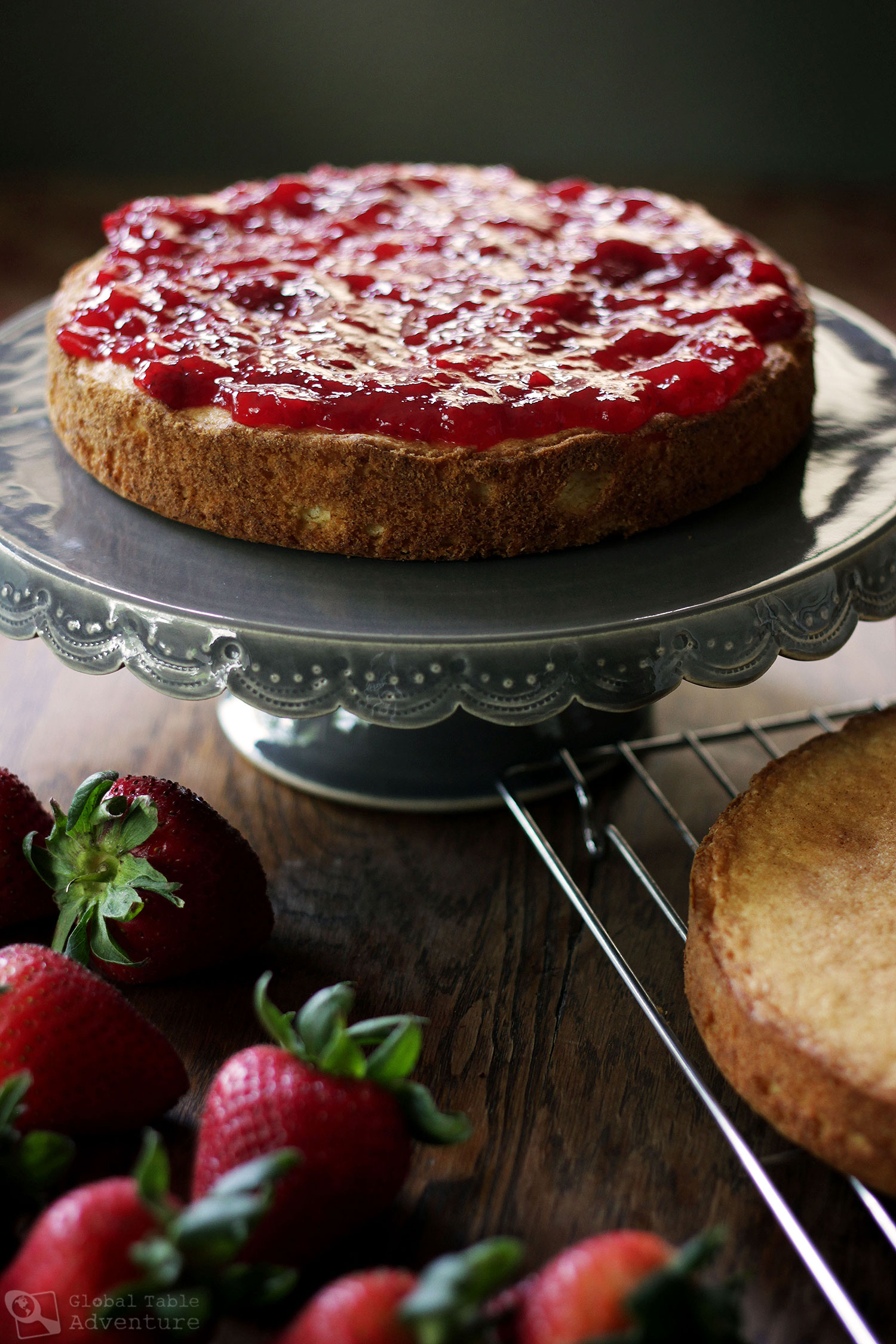 The top is left unadorned save a dusting of powdered sugar. 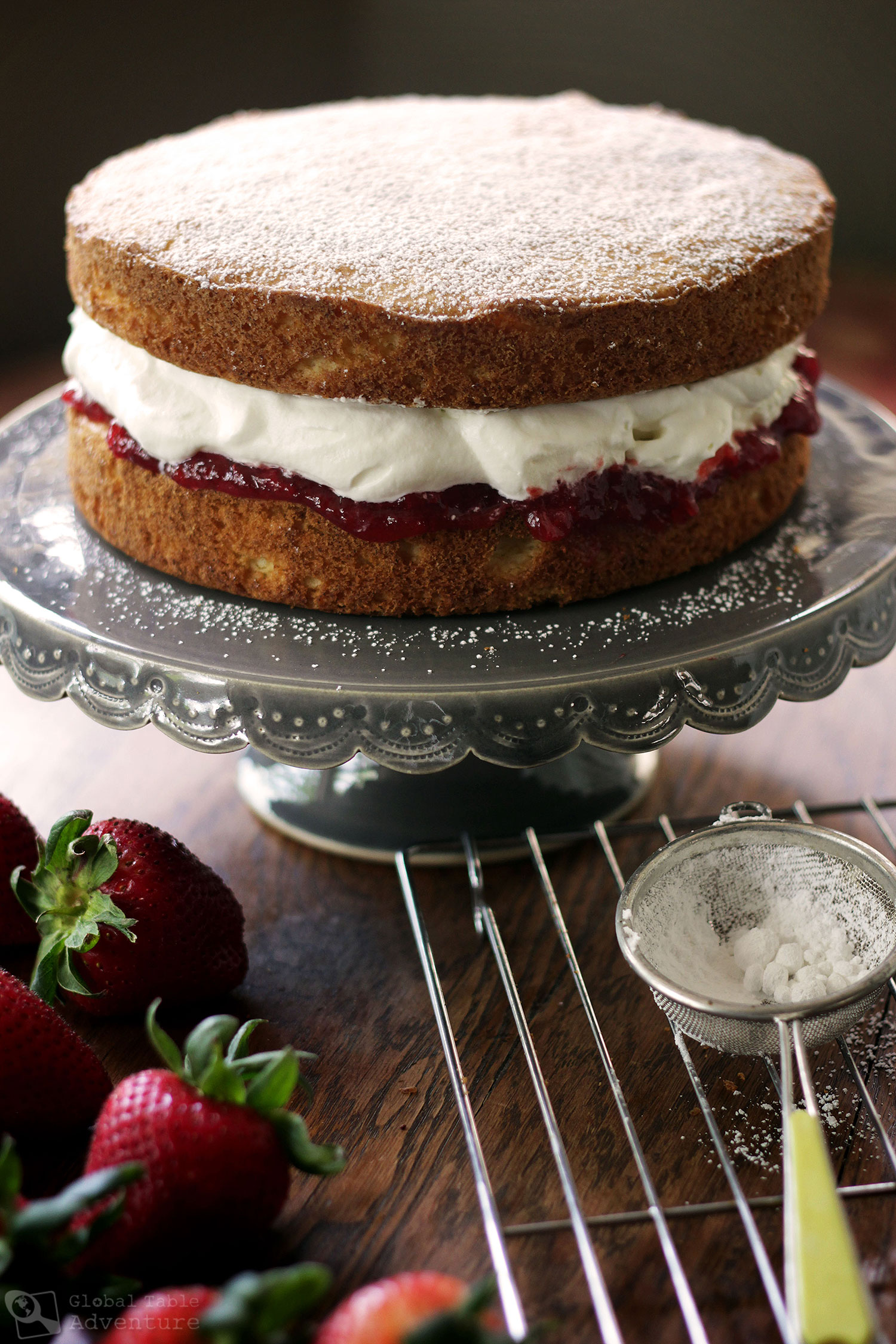 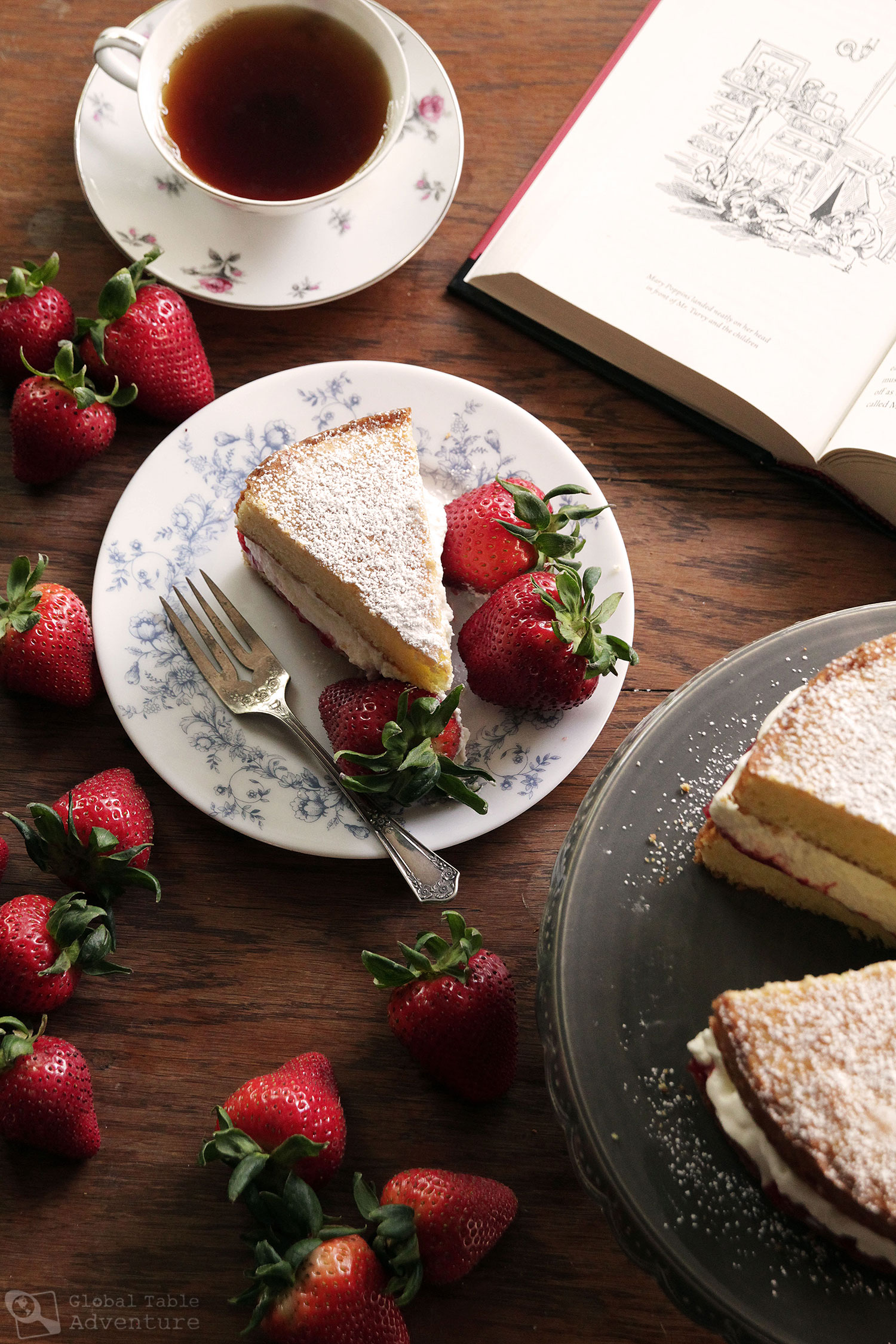 A few notes on the ingredients 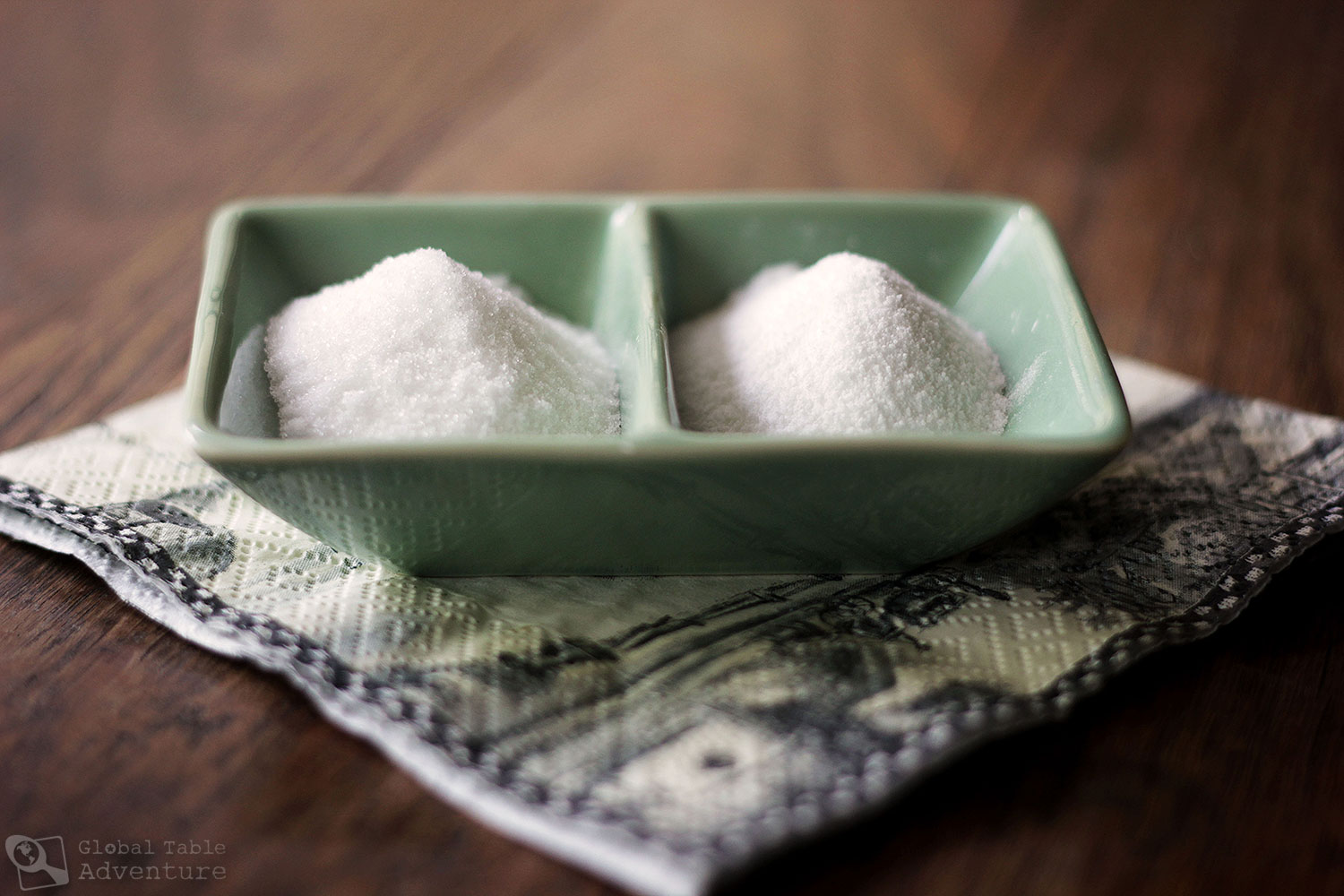 Superfine sugar is best for this recipe as the fine granules incorporate more readily. To make superfine sugar, take one heaping cup sugar and blend for about 1 minute. Measure out 1 cup and use as instructed. There’ll be a little leftover. See above – the sugar on the right is my homemade superfine sugar (click the photo to zoom in and see the difference in the granules). Note that it is not the same as powdered sugar.

I wondered if perhaps, as the grocer at Whole Foods indicated, the glut of best-selling cake mixes and gluten free products has – quite possibly – permanently taken the small shelf space cake flour once occupied. After all, the poorest selling products get the boot. In which case we all better learn how to make cake without cake flour.

The good news? Victoria Sponge Cake is also fabulous with all-purpose flour and requires no special trips to the market.

Which leaves you more time for reading and eating! British Victorian Sponge Cake
Victoria Sponge Cake is named for Queen Victoria (1819-1901) who enjoyed a slice or two at teatime during the 19th century. It is also a favorite of the fictional character, Mary Poppins. The mild cake is meant to be soft and spongy, hence the name.
Ingredients
For the cake:
For filling & decorating
Servings: layer cake (two 8" rounds)
Units:
Instructions
For the cake:
For decorating:
Storage
Recipe Notes

To make superfine sugar, take one heaping cup sugar and blend or process for about 1 minute. Measure out 1 cup and use as instructed. There may be a little leftover.

To avoid a domed cake, use baking strips.