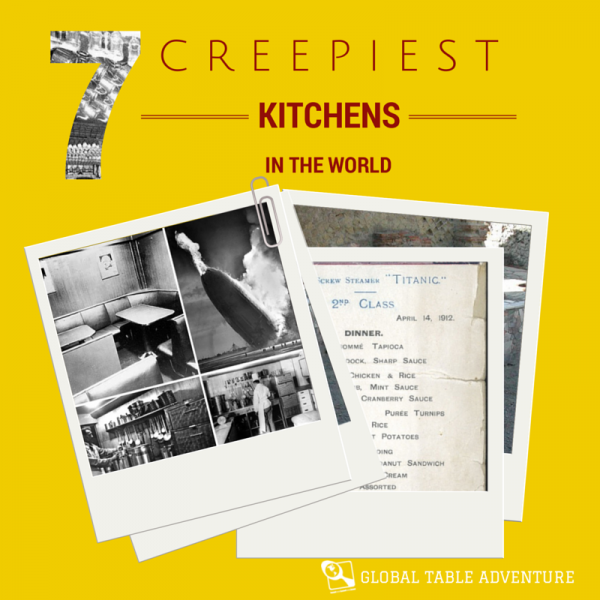 The kitchen should be the heart of every home, filled with happy memories… but these kitchens are chilling reminders of historical disasters, spine-chilling authors, and the cruelest politicians who ever lived. 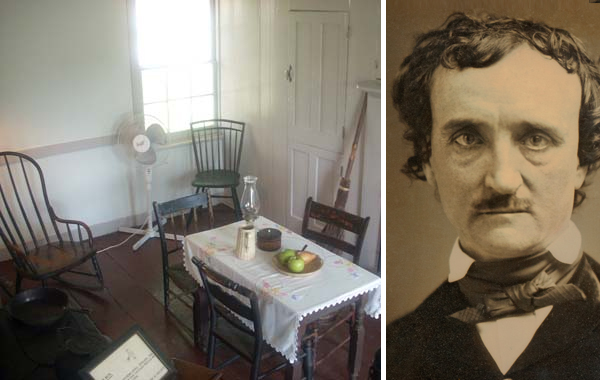 This kitchen might seem quaint, but this iron stove fed the creativity of one of the world’s best mystery writers – Edgar Allan Poe. He lived in this cottage during the last few years of his life in the late 19th century, along with his wife, mother-in-law, cat, and birds:

… Poe’s mother-in-law Maria Clemm prepared the family’s meals. Mary Gove Nichols recounted of this room, “The floor of the kitchen was white as wheaten flour. A table, a chair, and a little stove that it contained, seemed to furnish it perfectly.” Poe Museum.

Once upon a midnight dreary, while I pondered, weak and weary,
Over many a quaint and curious volume of forgotten lore,
While I nodded, nearly napping, suddenly there came a tapping,
As of some one gently rapping, rapping at my chamber door.

Adding to the creep-factor, Poe’s life ended in a completely inexplicable way – far from his hometown, disoriented, in strange clothes, after having been found in the gutter. Some think it was alcohol poisoning. Others wonder if something more sinister happened. (Read more at The Smithsonian) 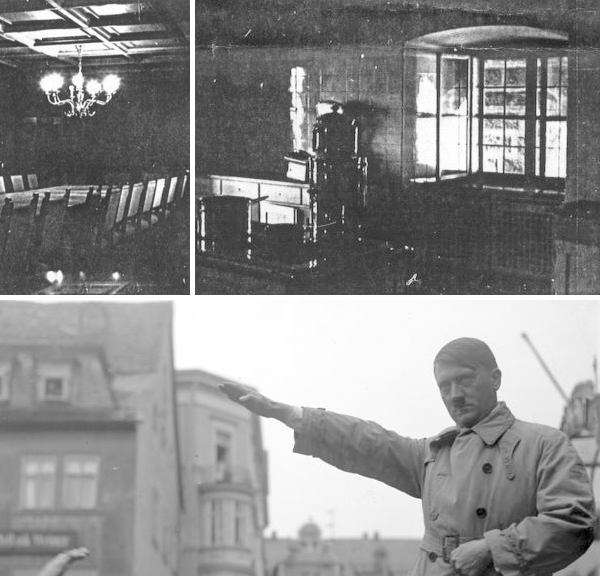 I get chills up my spine when I look on this man’s face. But did you know that Adolf Hitler – one of history’s cruelest dictators – also happened to be vegetarian? It was said that he averted his eyes whenever animal cruelty was shown in films and he kept his gardens stocked with fresh produce. (source)  This photo shows the kitchen and dining room from which he entertained his political guests.

The Titanic (Off the coast of CANADA) 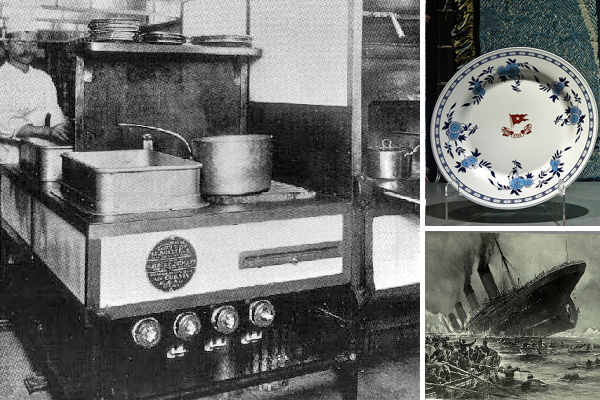 These kitchens come from the world’s most infamous shipwreck: the Titanic, which went down off the coast of Canada in 1912. I can almost hear the ceiling rattling with all those metal cups. What an eerie sound that must have been! This ship fed a ton of people, right up until the moment it sunk into the ocean:

A huge staff labored almost continuously in Titanic’s massive galleys to prepare more than 6,000 meals a day. The main galley, which churned out food for first- and second-class passengers, featured serving pantries; a butcher shop; a bakery; vegetable kitchens; specialized rooms for silver and china; rooms for wines, beer and oysters; and huge storage bins for the tons of coal needed to fuel the 19 ovens, cooking tops, ranges and roasters. (History)

One survivor, Ms. Walter Douglas, recounted the first class meals – feasts of “caviar, lobster, quail from Egypt, plovers’ eggs, and hothouse grapes and fresh peaches.” (Source) For comparison, here’s the last meal served on 2nd Class (the ship would hit the iceberg at 11:40 p.m. that night and go under with more than half of her occupants by 2:20 a.m.): 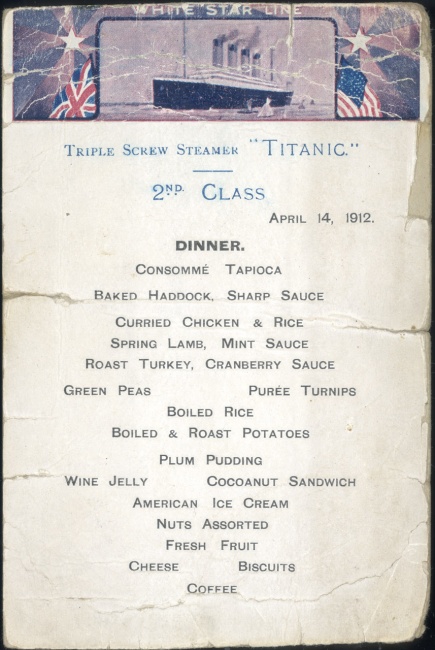 This hideaway kitchen in Ad Dawr, Iraq is where Saddam Hussein ate his last meals prior to capture. In the mess you can just make out a few staples like  vegetable oil, honey, coffee and water. More canned food is in the bottom cabinets. Two tea kettles and a pot occupy the stove area. The rusted barrel with holes in it looks like some sort of charcoal burner, probably used for warmth. Source. 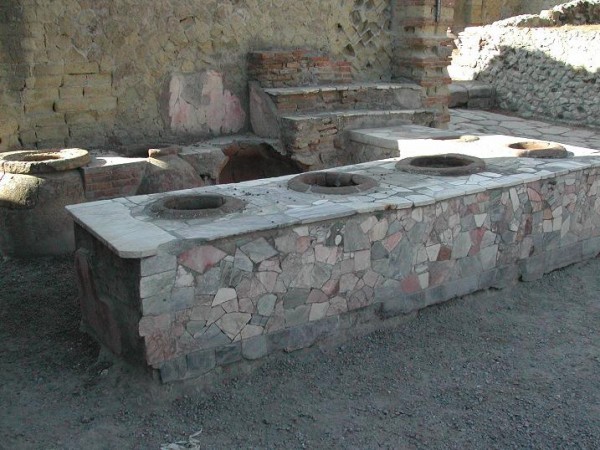 The city of Pompeii was buried in ash after the eruption of Mt. Vesuvius in 79A.D. – a horrific loss of life. But when the city was uncovered in 1748, archaeologists discovered much of the buildings and artifacts in tact. That goes for this kitchen and “thermopolium”  – the equivalent of today’s fast food establishments. In some cases, full plates and an assortment of cups and pitchers were found still resting on the counters, as though waiting for the customers to return.

These small shops had L-shaped counters into which large storage vessels were sunk, which would contain either hot or cold food. More than a hundred and twenty of these buildings have been discovered in Pompeii alone. They are linked to the absence of kitchens in many dwellings and the ease with which people could purchase prepared foods — just as in modern times. Eating out was also an important aspect of socializing in Pompeii. (Source) 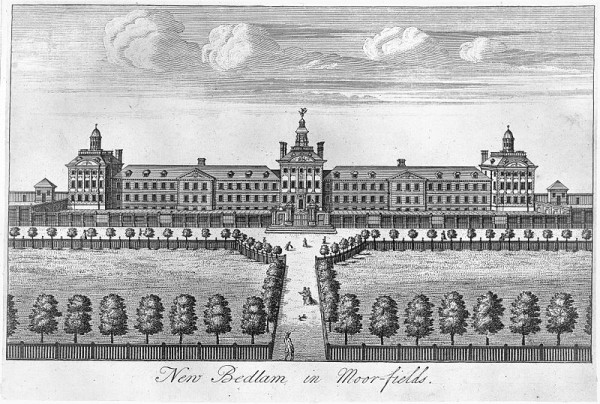 The Hospital of Bethlem, a.k.a. Bedlam, at Moorfields, London (Engraving)

This 8-sided kitchen was heart of Bedlam, a.k.a. the Hospital of Bethlem – the world’s most infamous asylum. The kitchen’s odd shape hints at its former status as central courtyard and garden for Bedlam. The kitchen was built to accommodate the ever-increasing number of patients.

A little background: the asylum was built in 1247 and became solely focused on treating the mentally ill by 1377, making it the oldest asylum in Europe. The building soon inspired the English word “bedlam.” which means confusion and noise.

Patients were cruelly referred to as prisoners, medical records were rare, and in the 1600’s the building went as much as 40 years without an inspection. Worse yet, Bedlam was built over sewers and human waste was known to block the entrance. In 1607 eating vessels were ordered for the inmates – some historians believe that there weren’t any -until this point. In the 1630’s the atmosphere was described as pure chaos by a Donald Lupton, full of “cryings, screechings, roarings, brawlings, shaking of chaines, swearings, frettings, chaffings.”

The hospital was moved in the 1930’s, with parts being demolished (including the kitchen) giving it a fresh geographic start but, for many, the horrors that earned the name Bedlam will never be forgotten. (More on the construction/demolition can be found here and here) 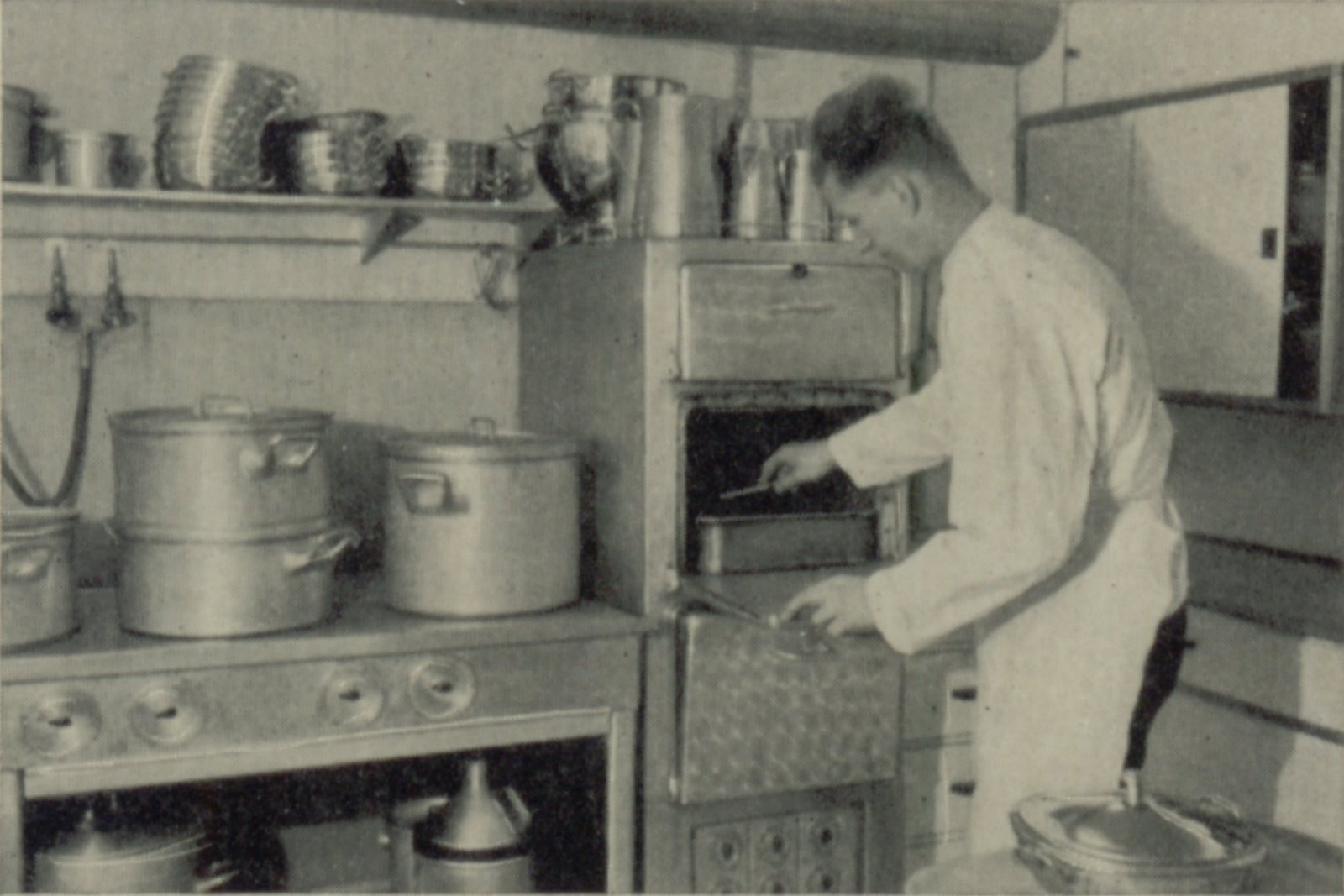 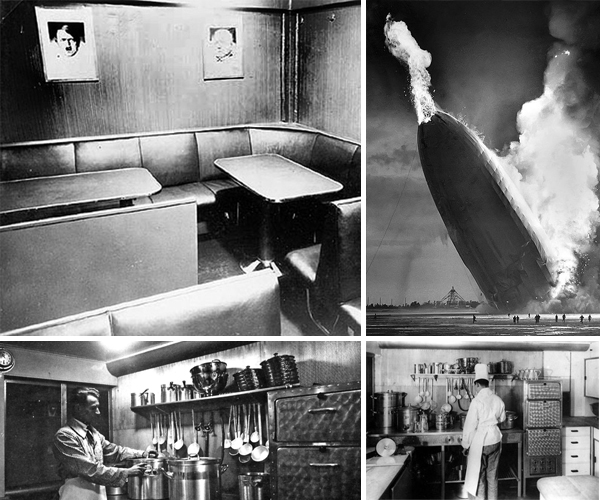 Photos from the Hindeburg. Galley Kitchen plus seating for the crew (note the photo of Hitler and Hindenburg). Source.  Photo of disaster from the Associated Press.

The Hindeburg is another enormous disaster – an airship plummeting from the sky in 1937 after catching fire. These kitchens were electric – they weren’t the reason for the fire. In more creepy news, this ill-fated airship was only 78 feet shorter than the Titanic and featured a photo of Adolf Hitler on the wall.

Thankfully, there were only 35 on-board fatalities. This is in great part because several people were able to jump off the doomed flight just before it hit the ground – including the 25-year old pastry chef, Albert Stöffler. He realized the airship was on fire after climbing on a table to avoid hot water and noticed the glow of fire outside the window:

He noticed that hot water from the kitchen had spilled all over the floor, and sat up on one of the tables so that his feet wouldn’t be scalded. From here he turned and looked out of one of the observation windows in the floor and saw on the ground below him the reddish glare of the fire. When the ship neared the ground, Stöffler knew it was time to get out. He jumped through the nearest window from a height of several meters, picked himself up and ran, with the ship’s burning frame crashing to the ground just behind him. He escaped almost completely unharmed. (Read more).

Curiously, the kitchen (and water) also played a role in saving the life of a young boy on board:

Werner Franz, the 14 year-old cabin boy, was initially dazed by the realization that the ship was on fire. As he stood near the officer’s mess where he had been putting away dishes moments before, a water tank above him burst open, and he was suddenly soaked to the skin. Not only did this snap him back to his senses, as he later told interviewers, but it also put out the fire around him. He then made his way to a nearby hatch through which the kitchen had been provisioned before the flight, and dropped through it just as the forward part of the ship was briefly rebounding into the air. He began to run toward the starboard side, but stopped and turned around and ran the other way, because the flames were being pushed by the wind in that same direction. He made it clear of the wreck with little more than singed eyebrows and soaking wet clothes and lived to be the last surviving crew member when he died at age 92 on August 13, 2014. (Source)

So those are the seven creepiest kitchens in the world – to me at least! Which ones do you find the freakiest? Which ones would you be curious to see? I definitely would like to see Poe’s some day. And I would have loved to have dined on the Titanic – but not on April 14, 1912.