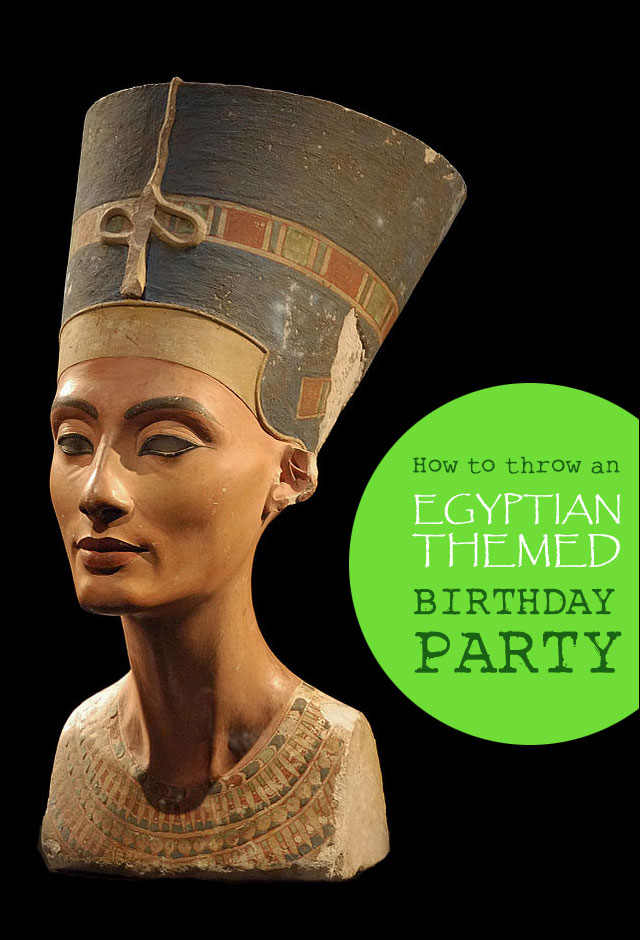 Walk the aisles of any party store and the selections are the same: overpriced plastic renditions of the latest Disney craze. But what would happen if I helped my child see there’s more to the world than someone else’s fairy tale?

What interests your child? Start there.

Ava’s Egyptian-themed birthday party came about in a round-about way… but it’s always been about what she loves.

About six months before her 5th birthday, I noticed she would often ask to read a book on gemstones that her Grammie gave her. She poured over each drawing, asking me to list which gemstone was which. Soon, she knew our birthstones by heart – ruby and moonstone.

Looking to build on her interest in Geology, I introduced her to Archaeology… the art of digging up artifacts from historical sites. We took several books out of the library about ancient Egypt in particular. 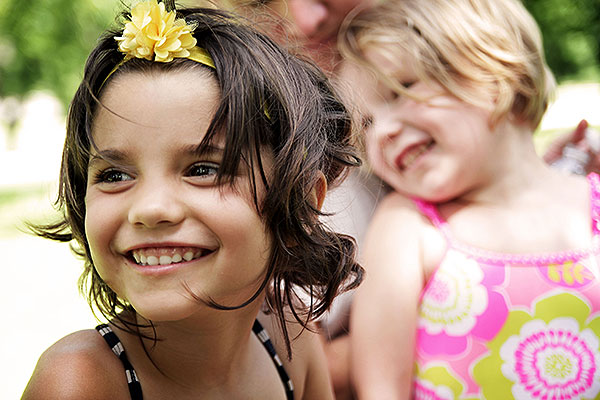 Observing her continued fascination with the “dig,” I asked her if she would like to do some sort of dig for her birthday party and she enthusiastically agreed.  It would be a gemstone AND an artifact dig, she decided.

Oh, and she really, really wanted to camp out.

From there the plans took off. 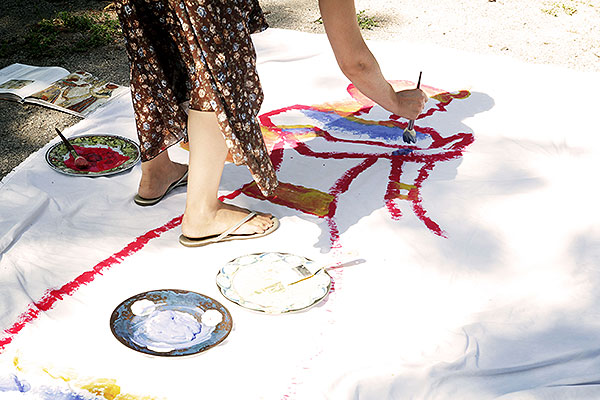 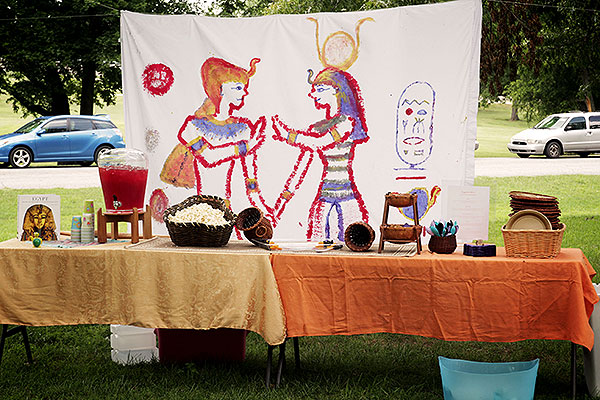 TIP: As you read along you’ll see lots of tips, tricks, and a few printables. I put everything together (with several improvements) in an easy to download guide so you can recreate this party for your own family:

A beach and campsite about 30 minutes from Tulsa, Oklahoma, on Lake Oologah, otherwise known as “Egypt by the Nile.” 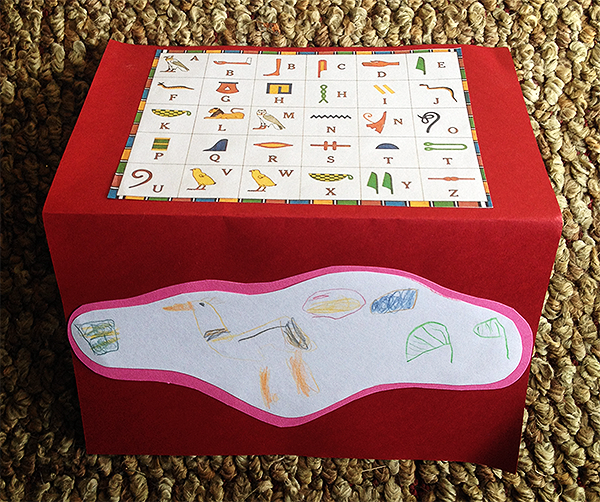 Most of our invitations were done with a Facebook Event page one month before the party. We also handmade invitations for a handful of Ava’s closest friends. I found a Hieroglyphic Key online and let Ava use it to draw the word “party.” I then color copied and cut out her designs. We glued it to card stock along with  more specific details (found on the inside).

We also included the hieroglyphic key on the back of the card so her friends could have fun drawing their own names.  We dropped these off at our friends’ homes 2-3 weeks before the party. 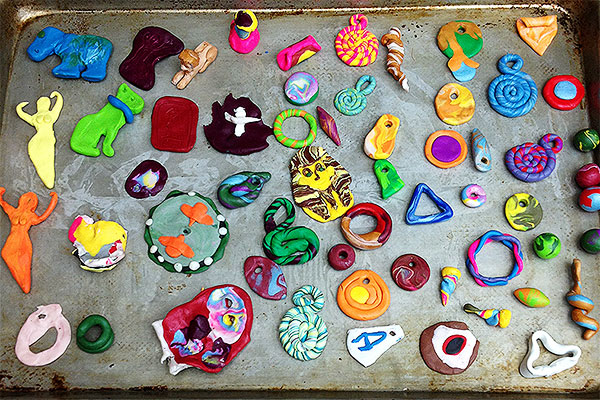 Ava and I spent one afternoon on a blanket at our local arboretum making artifacts out of polymer clay. I brought a cookie sheet and after each artifact was formed, we placed it on the sheet. When we got home we baked our treasures to harden and protect.

We made lots of gemstones, pendants, beads, as well as some items inspired by real Egyptian artifacts we found in library books, such as a King Tut, a sphinx, a statue of a cat, a hippo, and more. Ava got into making tornadoes and bowls, too… the photo above only shows half of the artifacts we made!

I decided to photocopy our inspiration pictures and glue them on a sheet of paper. This became a guide to go with the bigger artifacts so that the children could read up on what they’d dug up.

Oh, and no worries if your children make “unidentifiable” shapes – we invited the children to imagine what these more indistinguishable items might have been used for (that’s the job of a good archaeologist after all!). 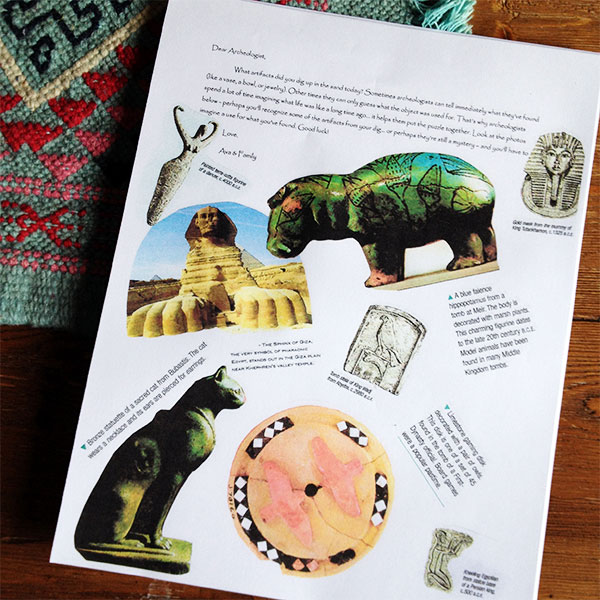 On the day of the dig we gave the children baskets I purchased at the local thrift store. They used them both for sifting the sand from the artifacts as well as to store their finds. While we could have done the dig by the beach, we did it up by our campsite while the “birthday cakes” were cooking (more on that later). 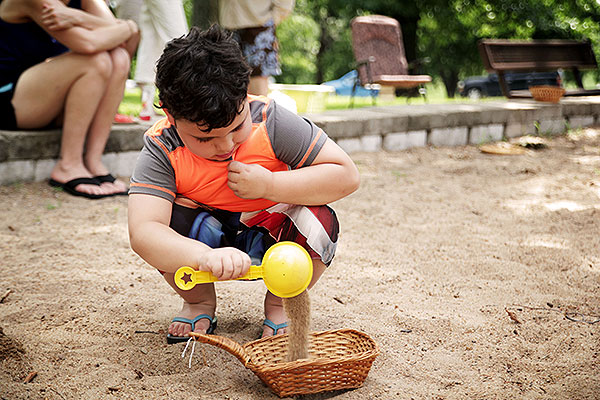 Since our Egyptian-themed favors were a little unusual, I included a description with them. You can see it rolled up and attached to the goodie bags with raffia. 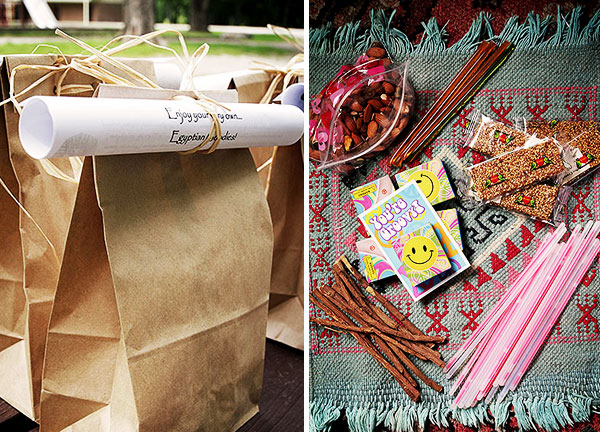 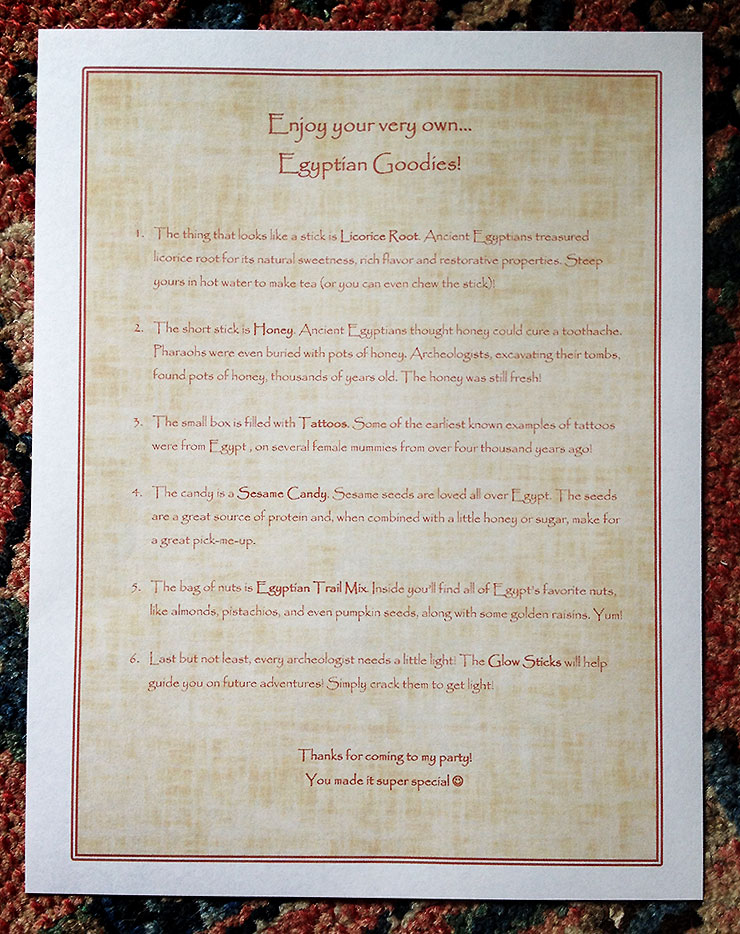 This was fun because the kids were all “why is there a stick in my favor bag”… but I explained to them they could chew it or pop it in a pot of hot water to make tea. Just like they do in Egypt (Ancient Egyptians treasured licorice root for its natural sweetness, rich flavor and restorative properties).  I found these for 10 cents each at our local Renaissance Fair, but I bet you could find them at a good spice shop – call around or browse online.

Did you know that Egyptian woman are credited with having some of the earliest tattoos in the world, from over four thousand years ago!? These peace sign tattoos were sent in by Ava’s Uncle G. Perfect timing!

Ancient Egyptians thought honey could cure a toothache. Pharaohs were even buried with pots of honey.  Archaeologists, excavating their tombs, found pots of honey, thousands of years old. The honey was still fresh!

Last but not least, every archaeologist needs a little light! The glow sticks will help guide the children on future adventures! (Be careful to identify these as non-edible, since they look a lot like honey sticks.) Ava helped assemble the goodie bags the night before, at our campsite…though there was still a bit of work leftover after she crashed out in the tent! 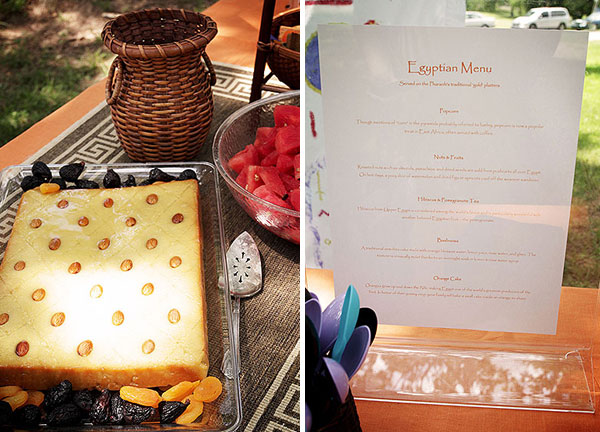 The menu was camping meets Egypt…. it had to hold up in hot weather and be refreshing. Thankfully that’s the goal in Egypt, too, where temperatures can soar up to to 104F during the day.

Though mentions of “corn” in the pyramids probably referred to barley, popcorn is now a popular treat in East Africa, often served with coffee.

Roasted nuts such as almonds, pistachios, and dried seeds are sold from pushcarts all over Egypt. On hot days a juicy slice of watermelon and dried figs or apricots cool off the weariest wanderer.

Hibiscus from Upper Egypt is considered among the world’s finest and is particularly wonderful with another beloved Egyptian fruit – the pomegranate.

A traditional semolina cake made with orange blossom water, lemon juice, rose water, and ghee. The texture is unusually moist thanks to an overnight soak in lemon and rose water syrup.

Oranges grow up and down the Nile, making Egypt one of the world’s greatest producers of the fruit. In honor of this yummy crop, each family baked a cake inside an orange to share. Oranges grow really well on the banks of the Nile – so well, in fact, that Egypt is one of the world’s greatest producers of oranges. I thought it’d be fun to help the kids celebrate this amazing fruit by doing a little campfire cake.

How to bake a campfire cake:

We cut the tops off the oranges, hollowed them out with grapefruit spoons, and added vanilla cake batter inside (from a box is fine – the batter from one box will fill 10-12 oranges).

We then popped on the top, wrapped the oranges tightly in foil and cooked them on the hot embers for 30-35 minutes (cooking times will vary depending on how hot your campfire is).

It really helped to have the foil precut and have a couple of adults help hollow the oranges. The pulp makes a great mixed drink for the adults (just add rum and ice!). It’s hard to overcook these cakes since the orange skin protects the cake batter – so even if it burns, the cake inside is still moist and tender Birthdays don’t have to be expensive look-a-likes in order to be memorable.

In the end, Ava’s Egyptian themed birthday party was incredibly fun. Many parents echoed the sentiment, saying it was the best party they’d ever been to. Cooking the cakes in oranges was a definite highlight, though the artifact dig was a close second.

In all honesty, there was nothing super complicated about this party. Decor was handmade or picked up at the library or thrift store… even the goodie bags were just brown paper lunch bags. The table cloths didn’t match. But everything went together in a shabby-chic sort of way… and the theme was love.

Best of all? Ava had a blast.

I may have peaked with this party planning thing… until Ava has her next awesome idea!

Here’s an instant download with everything we used for the party:

This download includes the Dig Guide, Goodie Bag Content Description, Egyptian Menu, along with basic instructions, decor ideas, and invitation ideas. The documents have been updated and improved to have papyrus looking paper and other fun details. (Whole drawing) Procession of figures with offerings; part of a wall-painting from the tenth tomb at Gourna, Thebes. Made during an expedition to Egypt organised by Robert Hay between 1826 and 1838.

You may be surprised what happens when you ask your child about their interests:

Their birthday party may take a turn for the better!

What do you love about the best birthday parties you’ve been to (kids or adults)?

P.S. I’m happy to spread the Egyptian love… which means a GIVEWAY!

HOW TO WIN:  If anyone can use our painted Egyptian sheet that we used for a backdrop behind or buffet, I’ll be happy to mail it to you! If more than one person wants it, I’ll give it away to a random commenter. Just leave me a comment as to why you’d like it!