We ate Tunisia and celebrated Ava’s fourth birthday right before I hopped on a plane to go to the World Domination Summit, hosted by Chris Guillebeau. Keith and I were sticky with the honey almond samsa. Ava ate two pita sandwiches spread with the grilled Tunisian Salad. (She must be growing. Again).

Then, I hugged my family goodbye and flew to Portland with a belly full of Tunisian goodness.

I’d been invited to speak in front of 3,000 people at the Summit. I’d rehearsed my talk for a month or two, twice a day. I had it down pat. I was going to talk about the spiced life. How this blog helped me achieve it. How it’s kept me from running away from my happy ending.

But the night before I was to deliver the talk, I received a phone call. My talk might be cut down. Way down. They’d know more in the morning.

Bright and early on the big day, I got confirmation. I had one minute on stage, instead of the eight I’d planned on. They wanted to know was I still interested in talking? 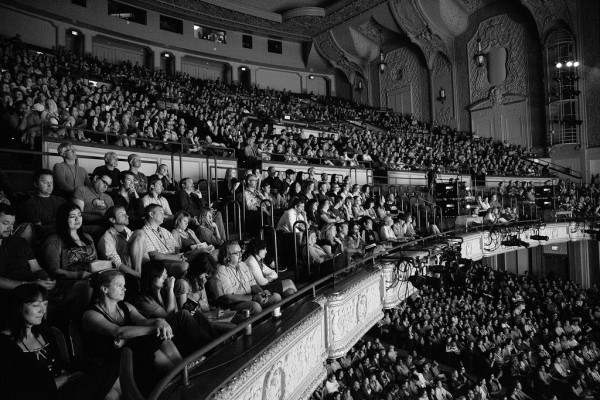 Look at all these beautiful people! And there’s double this amount on the main level. Photo courtesy of World Domination Summit, taken by Armosa Studios. 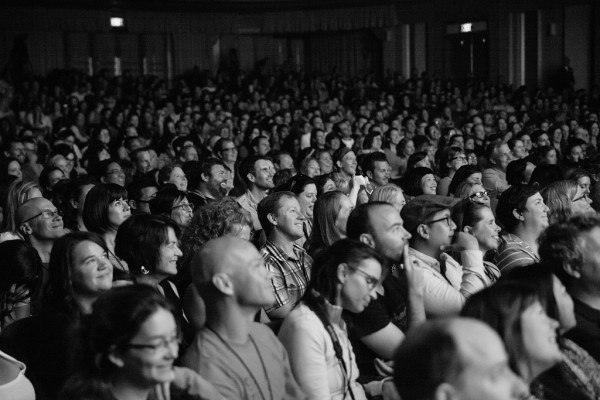 This would be the perfect excuse to back out.

But you know what I said?

I said yes. Because the answer could only be yes.

To be specific? The answer was yes and thank you. We must always be grateful, especially for an opportunity to grow.

With just three hours to go before the big moment, I sat on my bed and tried to figure out how to cram my talk into a minute, Cinderella-style. It didn’t take long to realize it wasn’t going to happen. In fact, I wasn’t going to be able to focus on anything to do with the spiced life.

I was going to have to hone in on the core of my beliefs and fast.

I had to sum up why I was doing this blog.

Not the little why, but the BIG why.

What is Global Table Adventure all about?

Thankfully I knew the answer. While cooking the world had given me a spiced life, it has done much more than that. It has taught me how to LOVE. How to be hungry for peace.

Once I knew my direction, the story just about wrote itself. Over breakfast, I rehearsed  my lines with a gal I’d met at the conference named Freya. She helped me make notes and, when I had a minor freak out, she did what any friend does:

She told me I could do it.

I even practiced my talk on two coat check ladies. Awesome.

All too soon, the time came to head onto stage. I didn’t know everything by heart, so I had to bring my heart to the table, instead. 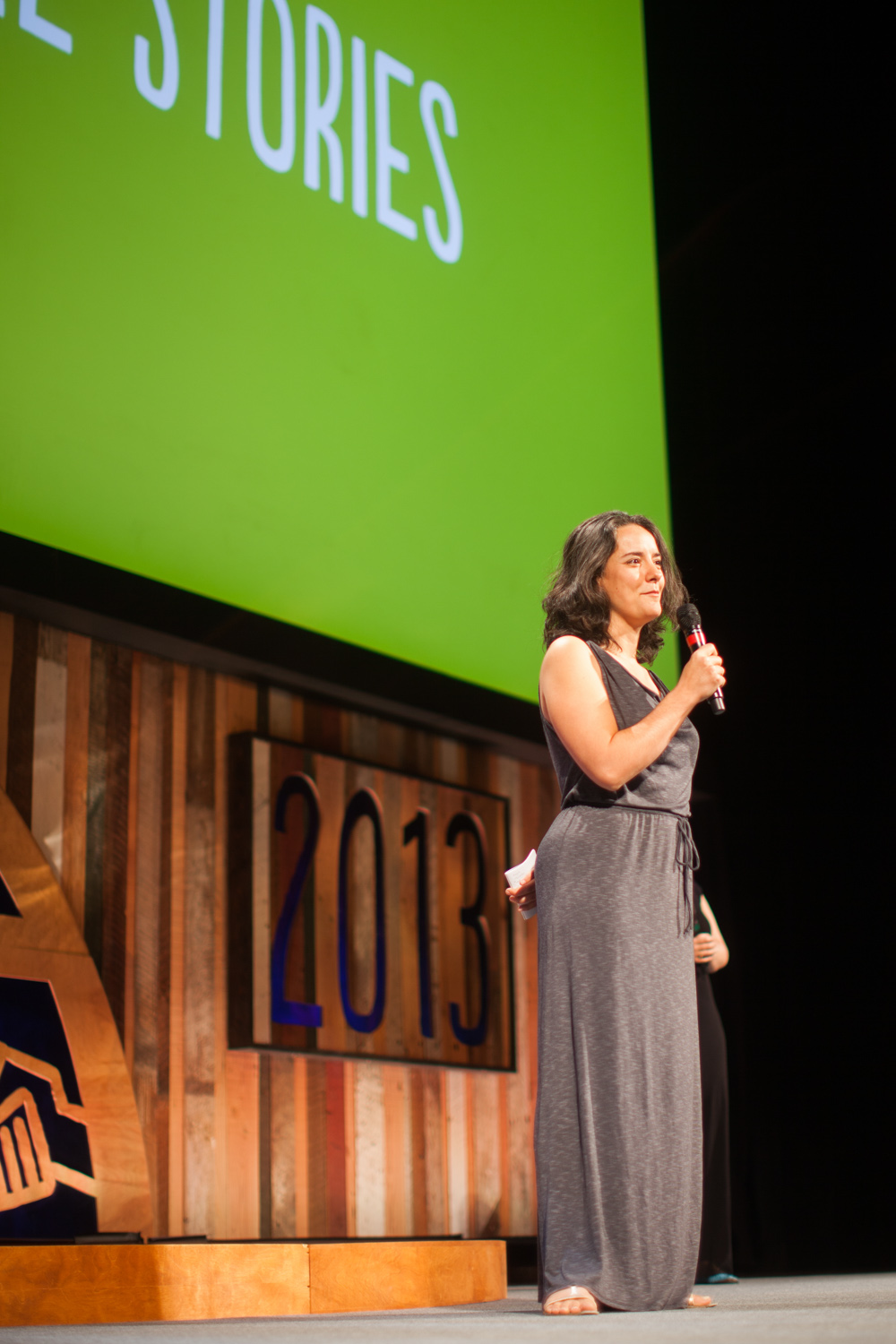 I wasn’t as nervous as I thought I’d be, considering how last minute the talk was.

But a few sentences into my talk I began crying. Hard.

The whole thing was a bit of a blur, but things got interesting about the time I said:

“Yes, there’s heartache, war, devastation, and famine in the world.

People are having important conversations about those things, as they should.

But you know what’s also important to talk about?

Once one tear spilled out, the rest followed suit, faster and faster. I’m not sure when the audience began clapping – maybe their audible acknowledgement of my beliefs overwhelmed me and opened the floodgates. Or maybe I started crying before that. The video (which I hope exists) will have to tell us that.

I do know one thing: when I tried to get it together, I snorted into the microphone.

I assure you, it was totally unintentional.

Friends, I don’t think I would have kept going if a few voices from the crowd began shouting “Keep going!” 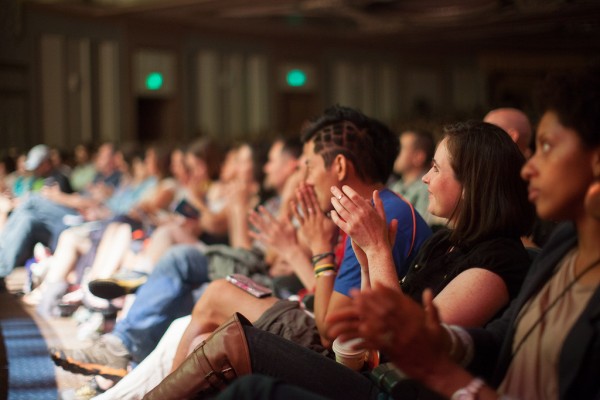 Thanks to them, I got my message out.

Ultimately, I told 3,000 people that it’s not about doing what we love, it’s about loving your world in the way that only you can… by using your unique gifts and talents to change the world. That’s what I’m doing here, and that’s what I wish for you.

So the talk ended and I slunk back into the crowd. But, when they released us for lunch, something strange began happening: people hugged me. Walking down the streets of Portland… they were hugging me! They hugged me while I was on the phone AND while I was being hugged by other people! They high-fived me. Some people picked me up and spun me around. Guys and girls kissed me on the cheek. At least 100 of them did one or all of these things. I know because they took my cards. And I ran out… I couldn’t move five feet without someone else loving me.

Look at this beautiful soul, who gave me a standing ovation: 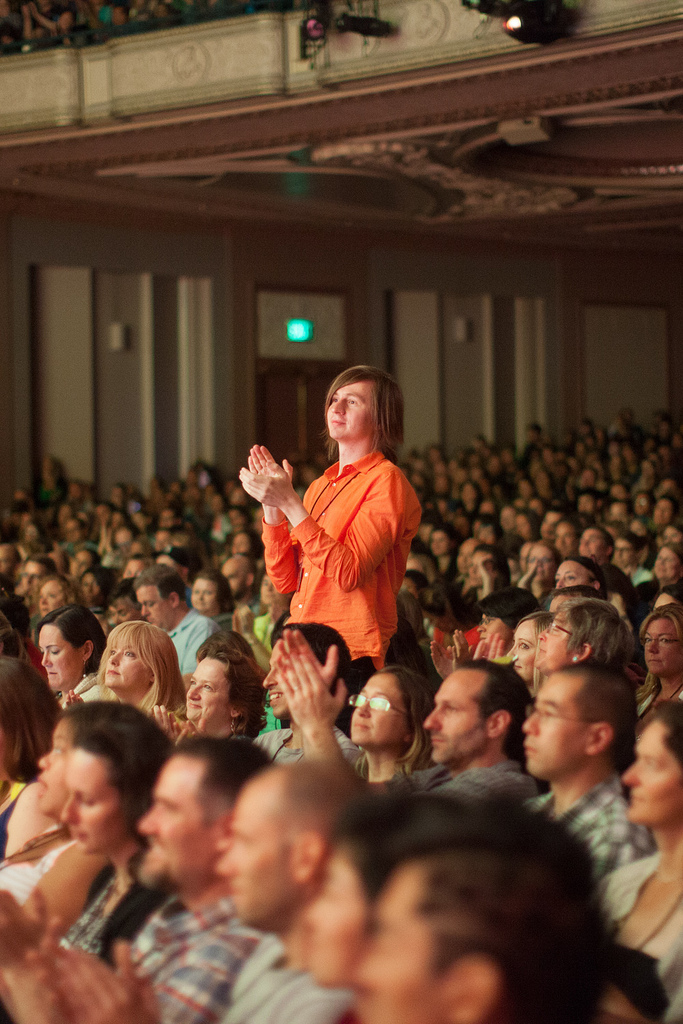 Throughout the day, many of the headlining speakers complemented me. Some confided that they’d cried with me. Andrew Warner even gave me his personal meditation bracelet.

I am bursting with just the strangest feelings… BEAUTY. SPIRIT. LOVE.

You know what it all boils down to?

If you risk sending love out into the world … then guess what? You’ll get it back. Try it. You’ll see.

Now, back to our Tunisian Global Table… and a bit about the recipes we tried this week! 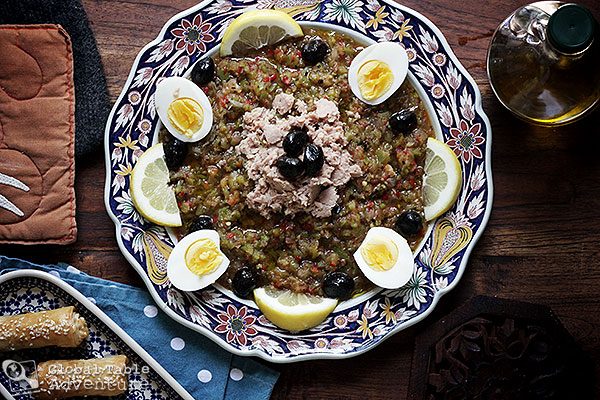 Salata Mishwiyya is a non-apologetic salad, full of intensity. Those caraway seeds, the raw garlic, and the chili peppers make for a punch. But the Tunisians know what they’re doing; by pairing it with tuna and hard boiled eggs, balance is achieved, especially with plenty of lemon juice, olive oil, and pita bread.

You’ll need to let it meld a while. I tasted it right after mixing the ingredients and felt like it was 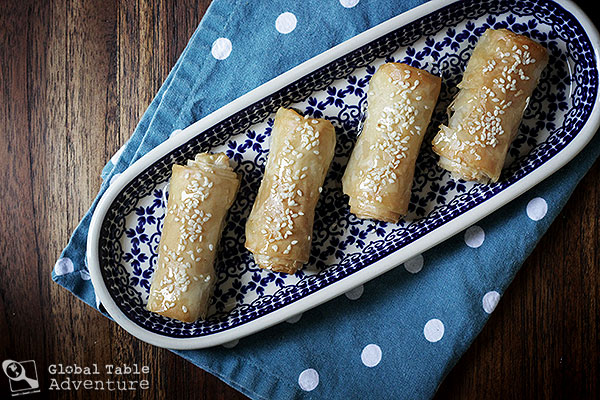 This is like a very fragrant baklava. The orange blossom water made the dessert dreamy – poetic, even. The almond mixture, by itself, isn’t very sweet, but a dunk in the honey syrup changes all that. Keith and I gobbled it up; we even had a friend roll his eyes with delight.

Not much, though it was too sweet for Ava. Maybe save one or two from the dunk if you have people in your family who don’t have a sweet tooth. Or do a quicker dunk.