Ava’s been saying something disturbing lately. If a toy breaks, she says “let’s buy a new one.” If fruit sits too long in the basket and gets mushy, she says “let’s go to the grocery store.”

She says these things, even with a father who shows her how to build and repair her toys in the garage … Even with a mother who teaches her how to make apple pies with bruised apples. Maybe she says it less than some children, but I’m still concerned, and I’m at a loss with how to handle it.

Our week cooking the Solomon Islands brought the issue into clear relief.

In the Solomon Islands, food is incredibly difficult to grow. There’s mountains. Monsoons.  On the remote islands, locals might have to row to another island just to get to the grocery store.

You get the drift. 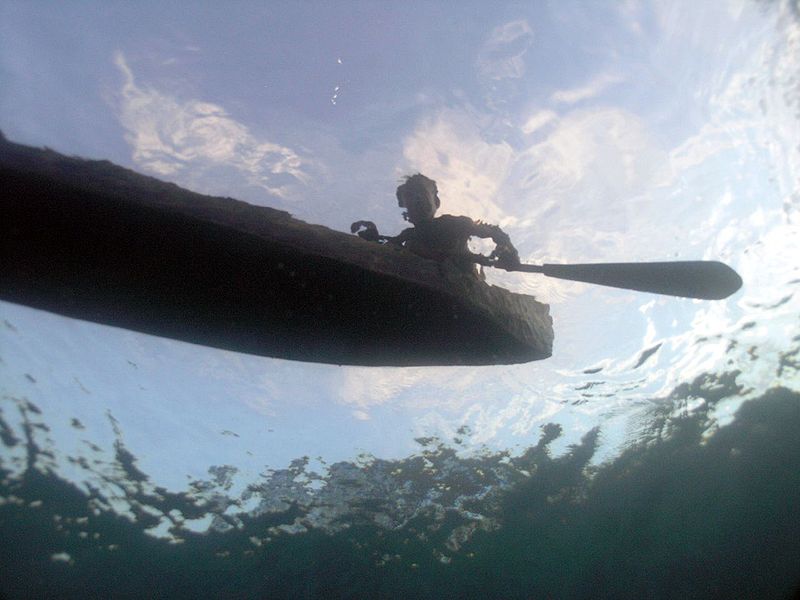 Solomon Dugout Canoe from below. Photo by mjwinoz.

Food is not to be wasted. Families must make due with what they have.

This includes eating green papaya and grated cassava, wrapped up in banana leaves, some of the rare indigenous foods.

So, as I grated the cassava (which took a whopping two hours),* I spoke to Ava about the importance of using what we have. Even if it takes a little elbow grease to transform it into something edible.

She listened the way any three and a half year old does, with partial interest and a great deal of misinterpretation regarding the term “elbow grease.”

Anyway, I’m hoping that the message of making due with what we have will sink in over time and become palatable, even desirable to her…  It’s just another variation on the important lesson my mother taught me:

The question I struggle with is how to teach Ava this lesson, when we are surrounded by stuff, stuff, stuff… all available nearly instantly and without much hardship. For example, we were at a birthday party recently where the child’s presents could have filled half an aisle of the toy store.

Should this be our normal?

If not, what should it be? 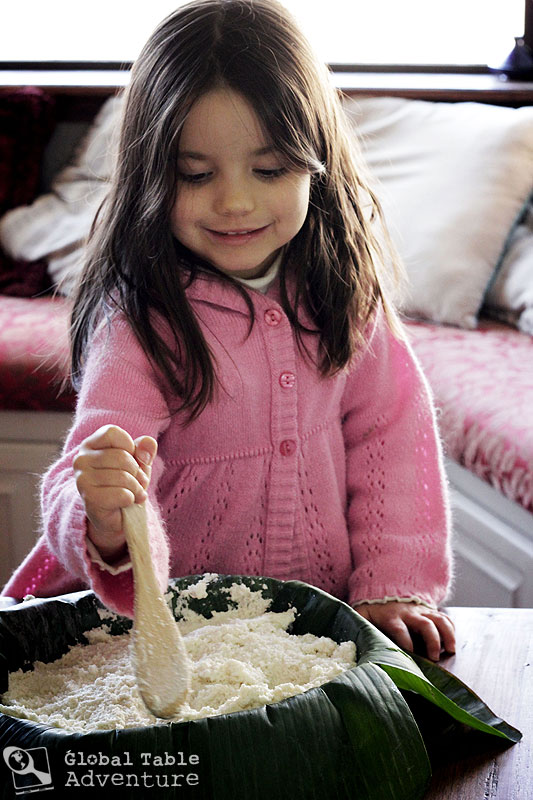 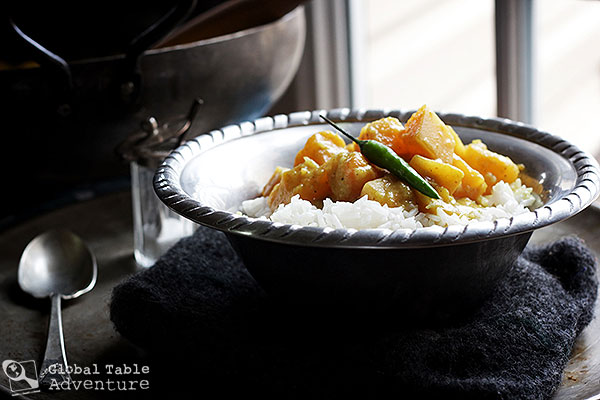 While green papaya is no show stopper on it’s own (she’s watery and a tad bitter, like any green vegetable worth its salt), I couldn’t put my spoon down once she was mixed with curry and coconut milk. I ate so much I rather wished I was in my sweatpants. Thankfully, papaya is super healthy and mostly water… so it’s a little like eating a salad… lots of fluff without much actual rib-sticking going on. Mr Picky was surprised by how much he liked it, as was I.

Since the papaya we get in Tulsa aren’t the greatest, this turns out to be a great way to use them if they’re bland.

I made the mistake of giving Ava big pieces of the papaya, which threw her off. I should have cut them very small, so she wouldn’t be overwhelmed by the texture. She didn’t quite get the fruity squish with the savory sauce, although she ate quite a bit of the rice soaked with curry (so she’s at least acquiring a taste for curry). 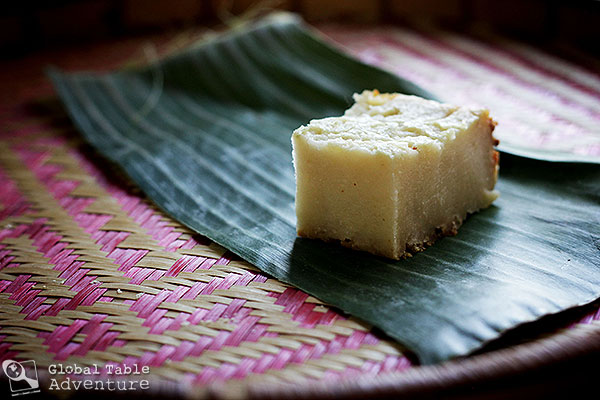 Cassava Pudding is dense and comforting, as with all carbs. The difference here are the flavors. By cooking the food in banana leaves, a most wonderful flavor emerges, a little like artichokes… when combined with the coconut milk, the result is hard to put down. I ate three pieces one morning before I’d even realized it. My favorite part has to be the browned edges… yum, yum. Keith liked this one as well, remarking on the coconut taste.

Considering my history with cassava (a.k.a. yucca), I expected this to be a complete flop. When it came out of the oven wet and gooey after three and a half hours cooking I was sure I’d failed. Turns out I just needed to let the cassava cool before trying to slice it.  This can be done on the counter or the refrigerator.

That being said… grating cassava and sweet potato for two hours was not my idea of the greatest of times. Turns out, there’s a reason cooking is a social activity in the Solomon Islands – traditional recipes take a long time to prep and bake, leaving ample opportunity for chatter, singing, and even dancing.

*I thought of another way to do this: peel and remove the central fibers from the cassava, then run the remaining cassava through the grater on a food processor. Then, run the grated cassava through the regular blade of the food processor.  I have no idea if it will work, but in the off chance that it does, it’ll save you 2 hours. The other option is to do this with friends and family – make a fun activity out of it.