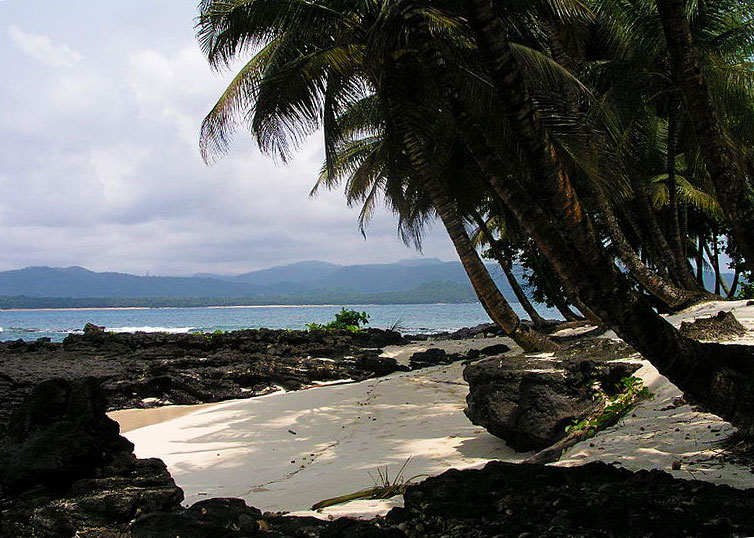 Are you slightly offbeat? Do you prefer to stand out from the crowd, preferably while eating chocolate?  São Tomé and Príncipe is just the place for you. These two tropical islands, just over 372 square miles combined, are home to an amazing amount of plants and animals that have developed into their own, exotic form. These spectacular critters are literally found nowhere else in the world.

The cocoa covered islands have guaranteed that they evolve in isolation – think of it as a tropical petri dish with azure beaches. Yes, there are spiders, but they have their own… shall we say… crabby sort of look. 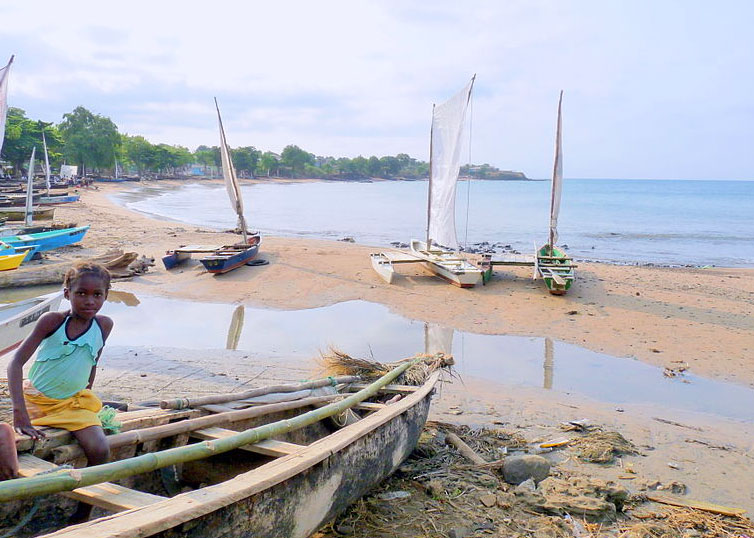 As for the food, it’s an amazing blend of traditional, sub-Saharan African foods with a strong blast of Portuguese influence. You’re as likely to find a simple sweet potato/pumpkin and egg dish [Recipe], goat or cassava… as you are a hearty plate of Feijoada (bean stew with pork or fish)  [Recipe] with rice (or better yet, riz creole – seasoned rice).

That being said, there’s nothing like chocolate from São Tomé and Príncipe.

Santomeans have rich, volcanic soil and the perfect climate for growing cocoa. Organic Fairtrade chocolate and cocoa, accounts for some 95% of their exports. If you see some, buy it. Make a simple chocolate cake with it. Or a chocolate mousse. Or shave it on top of a banana mousse [Recipe].

All of this, dear friends, would be very traditional (according to our Annabelle, a reader who happily gave us a few pointers).

Also, if you want to read a fascinating story on a highly eccentric cocoa farmer and the challenges he faces, read “The Chocolate King from São Tomé.”

Now, getting back to the bananas: they are incredibly popular with locals (as well as plantains). Just look at this partial excerpt from the São Tomé and Príncipe: the Bradt Travel Guide:

[dropshadowbox align=”none” effect=”lifted-both” width=”630px” height=”” background_color=”#f1f1f1″ border_width=”1″ border_color=”#dddddd” ]… Bananas are made into all kinds of snacks: banana seca, shrink-dried whole bananas, with a smokey flavor, a small sausage-shaped snack called a fios, made with corn flour, and the Principe speciality, bobofrito, a delicious high-energy snack made with ripe bananas fried in coconut oil. Other popular foods include gigumba (peanut brittle), sometimes sold in bars and restaurants – usually by the bottle only – and palla-palla, sweet or savoury crisps made from banana or cocoyam…[/dropshadowbox]

Other fruits include mangoes and papaya. And then there’s the coconut. The islands boast many varieties of coconut treats, from fried dough, to candies and confections.

Thirsty after all that nibbling? Wash it all down with a few swigs of cocoa, coffee, coconut water, or soda.

Whatever you do, keep the old Santomean proverb in mind: “A man does not wander far from where his corn is roasting.”