Sayings stab the truth right in the eye – with just a few simple words they gracefully reveal local culture.

For example, when an Armenian is in the company of good friends they say “We have bread and salt among us.”

Bread is an Armenian staple. The most popular flatbread is lavash, while the most popular leavened bread is Pideh. Comparing friendship to bread shows how both are basic sustenance to Armenians.

Salt is an essential part of all diets because it is required for basic body function.

“Without sodium, which the body cannot manufacture, the body would be unable to transport nutrients or oxygen, transmit nerve impulses, or move muscles, including the heart.” – Kurlansky, Salt

On top of this, getting sea salt was historically challenging in landlocked Armenia.  Thus, comparing a friendship to salt is a high honor in Armenia.

Armenians are known for lush markets filled with endless supplies of dried fruits, vegetables, olives, nuts, spices, and meats (check out the wonderful photos at Uncornered Market). Traditional meals include a healthy balance of fruit, vegetables, and meats, however tourists often don’t stray beyond the popular meat kabob (big mistake!).

Most meals are served with bulgar/bulghur. This grain tastes like a cross between potatoes and rice. If you haven’t tried it, pick some up at the store. It is wonderful and easy to cook.

Bulgar is also a component of the national dish, keshkegh. Keshkegh  is bulgar pilaf with lamb or chicken simmered in a broth with cinnamon and pepper.

Roast vegetables such as eggplant, onion, and garlic are prevalent as well. Meals are often accompanied by yogurt sauce (or even yogurt drink) and cheeses.

Many desserts feature honey. Cakes are soaked in honey overnight and pastries are layered with honey (like baklava). Lighter desserts often include fruit. The Armenian national fruit is the pomegranate, a personal favorite. Over the last few years, pomegranates have become available in most markets during the winter months. Pomegranates taste a lot like cranberry juice. Grapes are grown in Armenia as well and are used in cooking and in wine making. 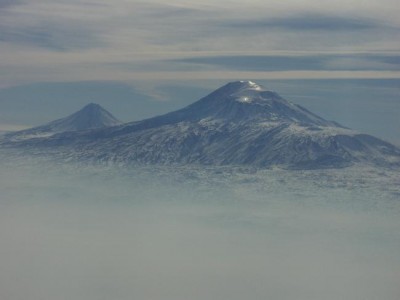