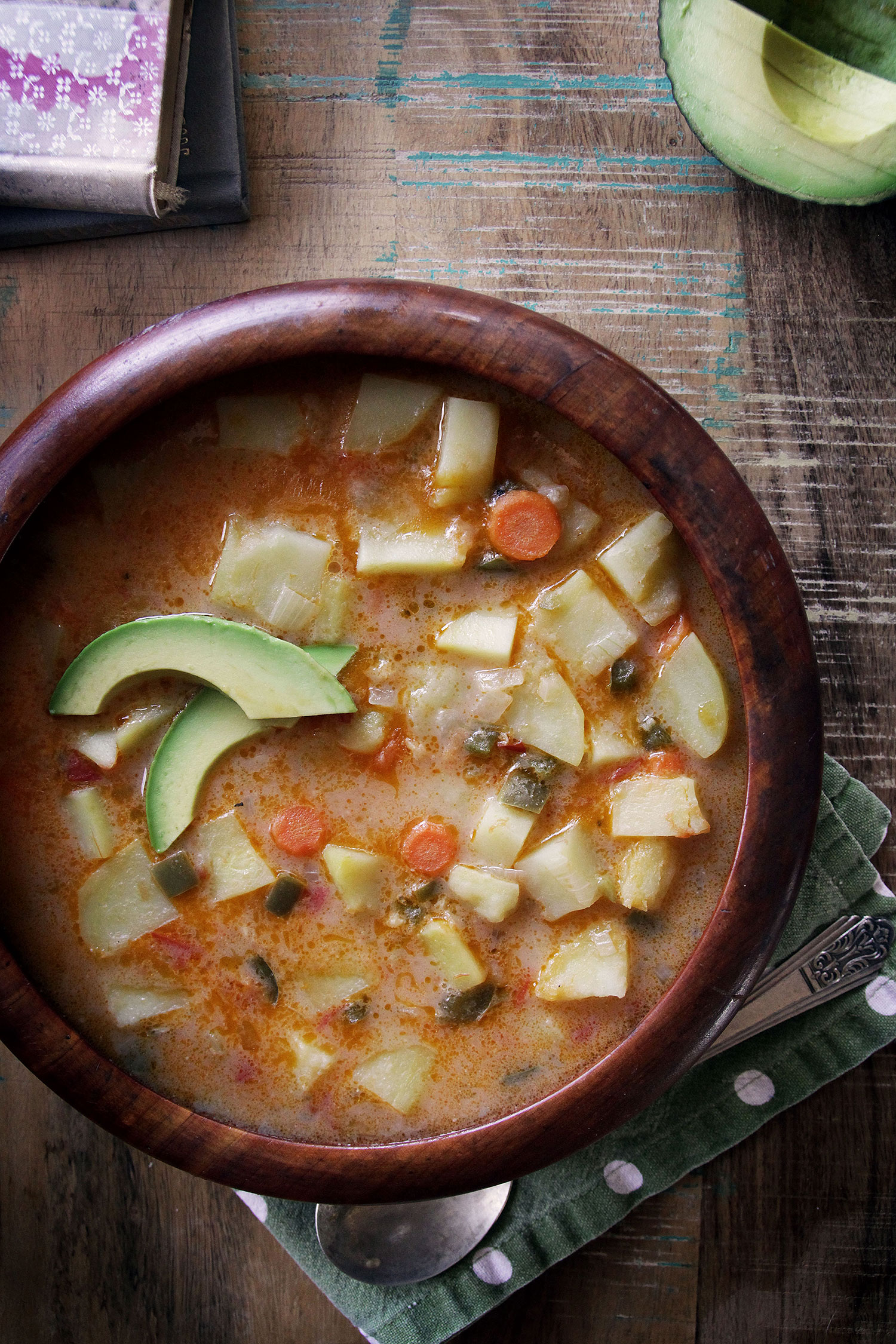 A spoonful of Tanzania’s Coconut Potato Soup garnished with moons of buttery avocado will transport you to the windswept slopes of Mount Kilimanjaro.  Never fear: The howl you’ll hear as you chow down won’t be the wind on your face, or some dangerous beast – but rather the horn of the Wakonyingo, calling for help.

“Sunrise view from Kilimanjaro Crater Rim towards the Mawenzi Cone” by Sbork.

Legends claim they are still down there, hidden from sight in a network of tunnels and caves, living a life any gnome would love. They keep their cattle with them and even grow banana trees in their earthen lairs. Ladders from their caves are said to reach the heavens.

Turns out this underground lifestyle isn’t so far-fetched. 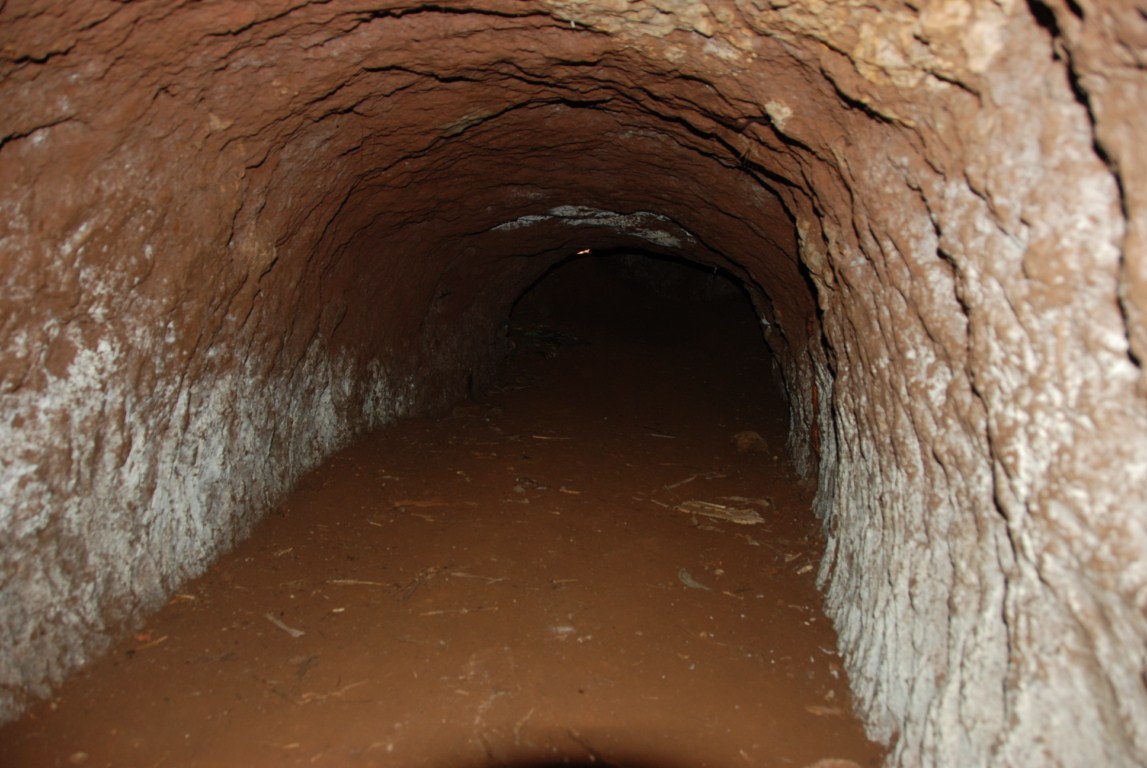 Chagga caves and tunnels were often masked by huts (photo by Meku84) and accessed by wooden ladders (photo by Robbie Todorovich, The Big Adventure).

The Chagga people (also Chaga), who’ve lived on the slopes of Kilimanjaro for several hundred years now, once dug tunnels to hide from invaders. They went so far as to keep their cows and kitchen underground. To stay secret, they used elaborate passwords at the mouths of the tunnels and even placed the underground kitchen beneath an above-ground hut. The hut always had a fire lit so the extra smoke wouldn’t be noticed by enemies. These tunnels can still be seen today.

Most hikers will never see the Wakonyingo, but if you venture off the beaten path you might catch one on a rare above-ground excursion. It is said that if you stumble upon a Wakonyingo, you will know him by his enormous head.

Legend states Wakonyingo’s heads are so heavy they sleep upright (for fear of being unable to pick themselves back up, off the ground). I searched for drawings in vain, but I like to imagine their epic noggins are similar in scale to Mr. Potato Head.

No doubt this is a dangerous life – any stumble or slip would leave the Wakonyingo incapacitated. As a safety precaution, they wear horns around their necks.

Sounding the horn is the fairyland equivalent of “Help, I’ve fallen and I can’t get up.”

Will you eat dinner tonight? Depends. 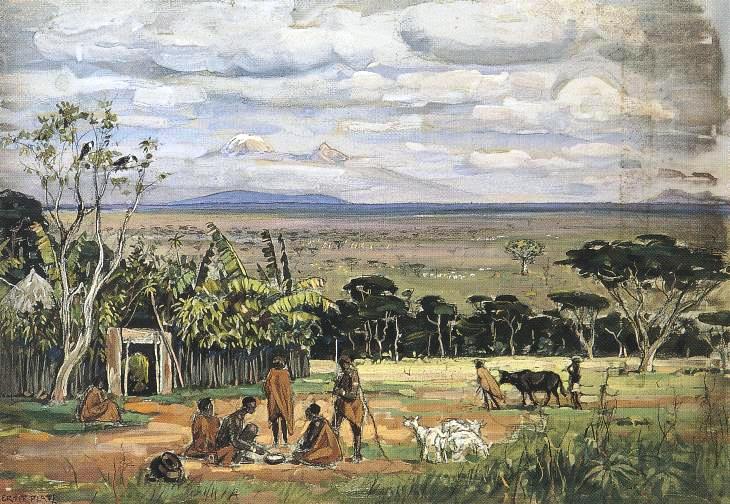 The Wakonyingo like to help the poor and play tricks on the greedy. A popular Chagga folkstory relates two brothers walking through the mountainside:

The first came upon an old woman who asked him to clean her eyes. He refused and walked on until he found a circle of the Wakonyingo, but not understanding who they were, he referred to them as children, asking when their fathers would be home. They told him to wait, as their fathers would return soon, and every time he renewed his question, they told him the same thing. Finally when night fell, he gave up, and and had to stumble home hungry in the dark. His brother went the same way some time later, and helped the old woman, who out of gratitude told him not to insult the Wakonyingo by calling them children. When he came upon their circle, he spoke to them as venerated elders, relating his family’s troubles with their cattle, and asking their chief for his advice. In return, he was rewarded with food, drink, and sent home with a full herd of cattle from the tribe. (Fairies on Kilimanjaro)

In summary, the Wakonyingo remind you to be polite to strangers and those who appear different from yourself. They’re not above delaying your dinner if you can’t handle these basic social skills. On the other hand, they will be more than happy to invite you to dinner if you show some interest in their community. 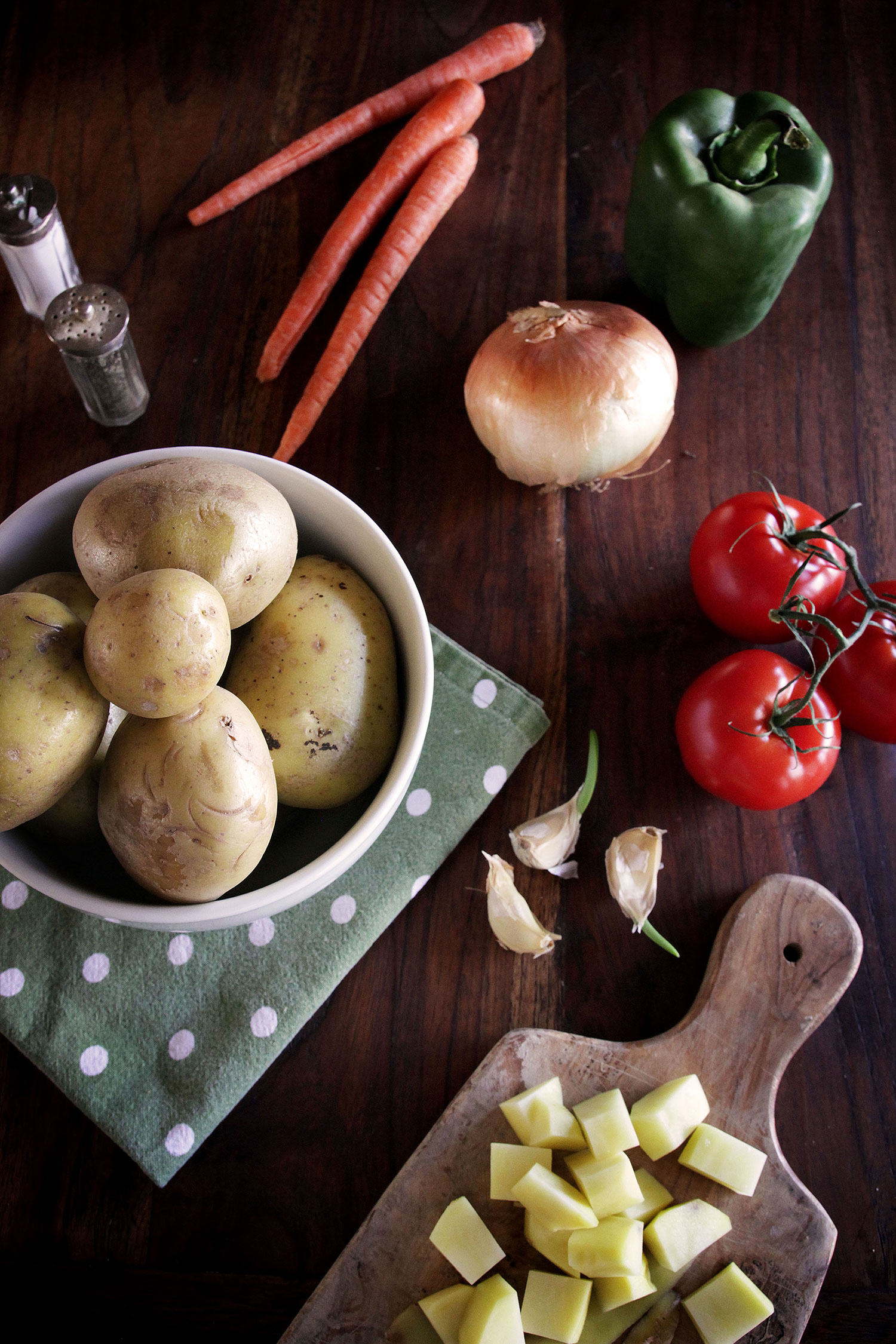 If you’d like to share a meal with the Wakonyingo (and get in their good graces), try whipping up a pot of homemade soup.

Many Tanzanian soups are thickened with coconut milk and include raw bananas (not plantains) or potatoes for filler. If meat is available, chicken or beef may be added. I recently stumbled across a Peace Corps cookbook with  recipe for Tanzanian Supu Viazi, or Coconut Potato Soup on National Geographic’s blog, The Plate and thought making an adaptation would be a fun way to get in the Wakonyingo’s good graces.

At it’s heart, Supu Viazi is a simple potato soup with Tanzanian flare.

The coconut milk is key. Coconut trees flourish on Tanzania’s coastline, east of Kilimanjaro, making it a signature of local soups.

[In Tanzania] About 25 million coconut palms are cultivated on approximately  252,000 ha. The crop supports the livelihood of more than 300,000 rural households.*

A ladle or two of coconut milk is enough to give a large pot a swirl of creamy, tropical flavor.

Another signature component of Supu Viazi is the pepper, onion, and tomato base. This trio is so popular in Tanzania (and throughout sub-Saharan cooking), one bite tastes like home to locals (in much the same way as the cooking base “mirepoix” – onion, carrot, and celery – is classically French). Spicy or bell peppers work equally well in this base. 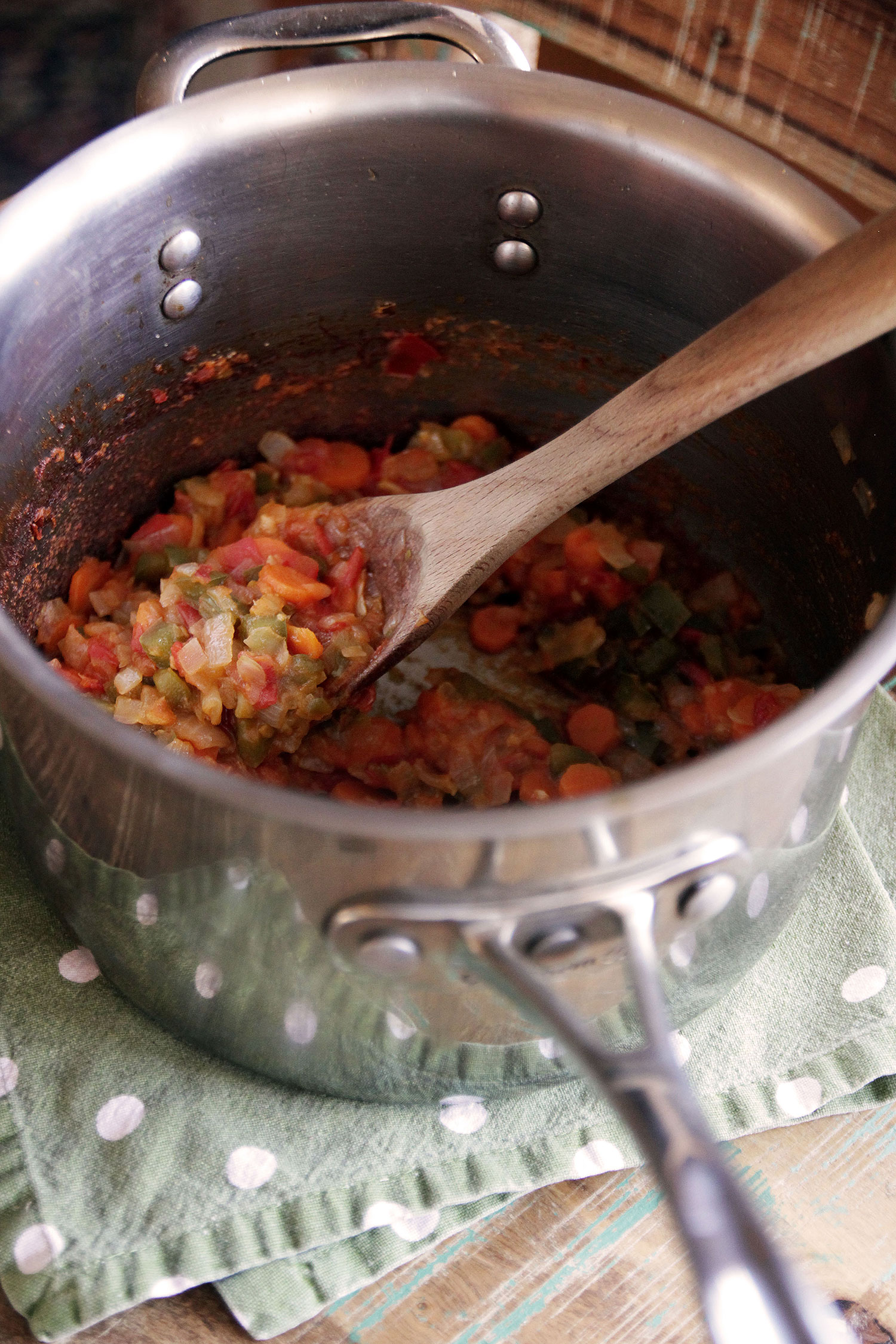 Last, but not least, be sure to cook the base down until the wet mixture dries into a paste. As it toasts, the flavor will deepen.  Give the whole mix a gentle bubble; the coconut will mingle with the softened potatoes in a dreamy way…

Finally, add the avocado garnish and you’ve created quite the fairy tale.

And that is a story I want to be a part of. 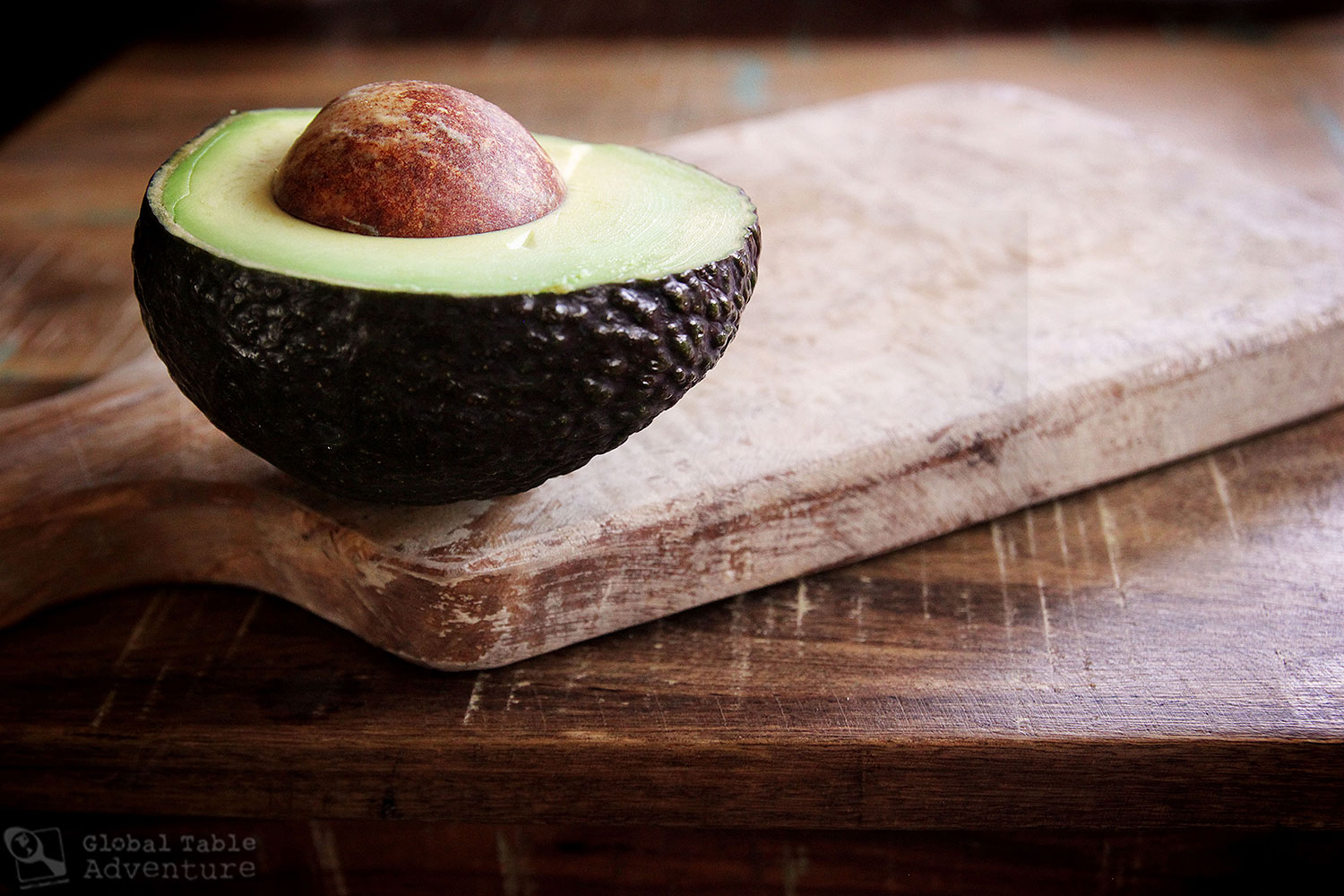 Kilimanjaro and Its People by Charles Dundas
Myths and Legends of the Bantu by Alice Werner
The Heartbeat of Indigenous Africa by R. Sambuli Mosha
Fairies on Kilimanjaro
Kumbe I can Cook! (2012 Peace Corps Cookbook) 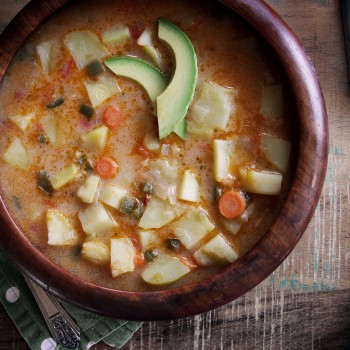 Tanzania's Coconut Potato Soup | Supu Viazi
Soups in Tanzania are typically thickened with coconut milk, which gives our Supu Viazi lovely, tropical flare. Substitute in one green banana for one potato to add even more local flavor. Enjoy on a cold winter's day, while huddled by a fire ... or in an underground tunnel with the mysterious Wakonyingo people. My version is inspired by the recipe in "Kumbe I can Cook," the 2012 Peace Corps Tanzania Cookbook.
Ingredients
Garnish:
Servings: people
Units:
Instructions