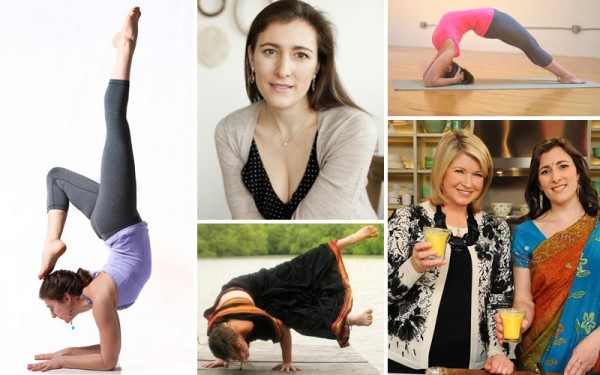 “Me, me, me” is most certainly not Sophie Herbert’s mantra.

Sophie’s passion for social activism on a global scale shines like a bright light. Everything she does is for the benefit of others – from yoga, to singing; from films, to writing. She’s been to India 8 times, spending a total of about 14 months there as a volunteer and yoga instructor.  She’s also taught yoga in Kazakhstan for 3 months. Sophie writes for Whole Living Magazine, is an ambassador for Yoga Gives Back, a charity dedicated to assisting India’s destitute women and children, and the co-director of celebrity chef Vikas Khanna’s next documentary. You can find more information on her web site and follow her blog on Whole Living.

For anyone interested in making the world a better place, Sophie is someone not simply to know, but to study. Her positive energy is absolutely contagious.

And now let’s hear her amazing story, in her own words.

1. You do the most incredible work as a social activist, yoga instructor, musician and advocate for children in India. How did you find your calling? Please tell us a little about your journey to who you are today.

What brought me to where I am now was a series of small things… Here’s what I consider the root of it:

First, I’ve always admired those who do social work.  As a visual artist and musician, I’ve also had a powerful drive to share ideas I deem important. 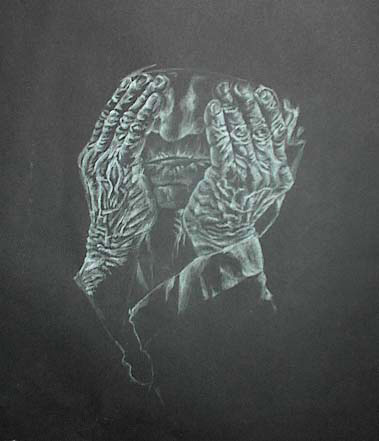 Until I was 20, however, I admit that the majority of my artistic works were more autobiographical. There were a few exceptions, such as an honorary drawing of Mother Teresa I created in high school. Oddly enough, at that time, I didn’t know to what a great extent she gave of herself in India. Nor did I know how much India would influence my own life.

I moved to New York at age 18 to attend the Cooper Union School of Art. At that point, I had practiced some yoga here and there, after being introduced to it by my Aunt Martha Stewart. My practice was inconsistent, but I always appreciate the sense of mental calm I found after each class.

During the 2nd and 3rd year at Cooper Union, I sadly witnessed and documented the trial and unjust incarceration of my aunt. This experience and the immense media storm around it was eye opening. In short, I have tremendous respect for my aunt, who moved through it with such grace.

Soon after Martha went to prison in late 2004, I was accepted as an exchange student to L’Ecole des Beaux Arts in Paris.  Just before leaving the country, I visited my aunt in prison (another eye opening experience!). While discussing summer plans, she suggested that I should visit India.

I didn’t give the idea much thought until a couple months later, while attending a class at the Sivananda Center in Paris.  An inexplicable spark went off and I found myself looking for tickets to and volunteer options in India that evening.  In the next 1½ months before going, I established a daily yoga practice, became a vegetarian (which continued for 3 ½ years- I now eat meat sparingly as my body didn’t react well), and read up on the culture/country.  Had I not been living in Paris, away from the constant pressure of NYC (where I had been burning the candle at both ends), I doubt this shift would have been possible.

My first trip was 5 weeks long.  During this time, I taught English to Tibetan refugees in Dharamsala, Himaschal Pradesh, did a 10-day intro to Buddhism meditation retreat (which was very profound for me), and then traveled solo from the North to Rajasthan and eventually to Mumbai.

I learned so much!  Teaching English led me to love volunteering.  I wanted to find every possible opportunity to help out before leaving.  In Jaipur, Rajasthan, I spent a few days lending a hand at an S.O.S. Children’s Village.  It was the greatest way to spend my 21st birthday.

And that was just the beginning…

2. You state that your travels to India have inspired “the most empowering realization: to never underestimate our ability to positively transform the world through small, intangible actions” I love this. Can you share a story from your time in India, when this really hit home?

After Jaipur, I went to the intense and enormous city of Mumbai.  Somewhere en route, I ate something disagreeable and had a powerful bout of indigestion.  It was extremely hot and the movie theater seemed like an excellent place to cool off.  So, I went to see “Hitched” with Will Smith and met 2 Danish girls waiting in line.

They were so inspirational! Not only had they spent months working at an eye camp, they were now volunteering at a Mother Teresa House for physically and mentally handicapped children in a Mumbai suburb. They invited me to visit the next day.

I hopped on the suburban train (not knowing there was a ladies berth, I went in the men’s section and got a number of odd looks!) and journeyed out.  I am indebted to those 2 girls for lighting the way down the path of karma yoga (selfless service).  I hope to look them up one day and say thank you… I was so moved by what I saw at the Mother Teresa House that I immediately went to an Internet café and requested a leave of absence from Cooper for the fall semester so that I could return to India and volunteer.

Sadly, many of the children at the Mother Teresa House suffered from conditions that could have been prevented with proper vaccinations and/or prenatal health care. There were too many children who were entirely crippled from polio. Some couldn’t even feed themselves (think – a vaccine that costs less than $1 could have prevented this!).  There was one girl with only one arm (no legs…) who I will never forget.  Her smile was so bright, so present, so complete.  The children seemed so happy to be alive and excited about our visit. One of the Danish girls said to me, “You must remember, these are the lucky ones.” That, too, will always resonate in my head.  Every petty complaint becomes overshadowed in a moment like that… I suppose that was the big fork in the road for me.

To think – I could forgo a cup of NYC coffee and put that money into preventing polio in 2 children.

This experience also inspired me to research how little it costs to support children at various orphanages. For example, if I eat out 1-2 times less a month, I can pay for a child’s living and education costs.

Once I discovered how such small things could make such an impact, apathy was no longer an option. 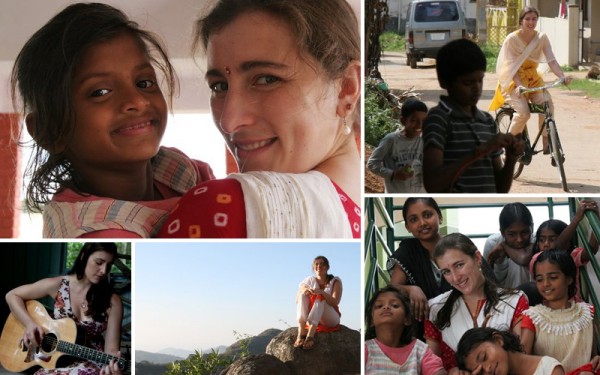 3. Please share a memorable mealtime story from India, possibly one that changed your outlook in life.

Hmmm… There have been SO many amazing meals in India.  I think some of my favorite meals have been at my adopted Aunt Gayathri’s house in Mysore, Karnataka.  Everything she cooks is so full of love.  She has the most open heart… In fact, I came to know this over her food and coffee in August of 2006.

If Gayathri hadn’t invited me into her kitchen, I probably would have never found the Deenabandhu Trust Children’s Home, the organization that I have worked with for nearly 5 years. Gayathri introduced me to her neighbor who’s on their board.  It’s amazing how one event leads to the next. I am deeply indebted to her.

Gayathri’s ragi roti is one of my favorite dishes! Generally, I eat every possible breakfast in Mysore with her.

I also love meals passed on the train.  Indians love to share.

4. You recently began work on a project with celebrity chef Vikas Khannas’ – known for his Holy Kitchens documentary series. Together you are creating a short film for the New York Rescue Mission. Please tell us more.

Ah! Vikas is an amazing human being, who I’m so grateful to know.  He’s such a unique and inspiring person.  I had the good fortune of meeting him on the Martha “India” Show.

The chance to work on the documentary also came from an organic series of events — in short, I went to dinner at his restaurant (it was the most incredible meal.) Coincidentally, 3 of my favorite people who I had worked with in the restaurant industry while at Cooper were working there!  One of these old friends, Pooza, and I offered to help serve food at the Varli Food Festival (also fundraiser for NY Food Bank) 2 weeks later.

That night I met the wonderful director Ronnie Bhardwaj, who was also helping at the Varli event.  Next thing I know, Vikas proposed we all work on Sacred Fire together!  Ronnie and I volunteer at the Rescue Mission every week and have done quite a bit of filming. It’s an honor to volunteer more in NYC, too. It’s been something I’ve wanted to do for a long time.

I hope to help out on the next documentary about Buddhism, too.

5. Your blog column “Yoga on and off the mat” on Whole Living is so inspiring. Do you have any tips for maintaining balance in the midst of day-to-day chaos?

Oh! Thanks so much.

I think one of the simplest and most powerful practices is a morning gratitude practice. You can even do this when you’re making coffee. Think of all you have – body, mind, opportunity.  How can you make the best of it? Remind yourself throughout the day… if something stressful comes up, remember what you have… it probably will help you better navigate through any situation.

Gratitude is an enormous virtue.

Bring love into your work.  One of my favorite quotes of Kahlil Gibran – “Work is love made visible.”