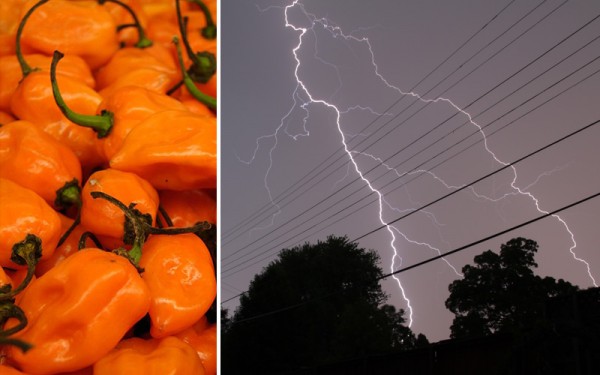 Keith snapped this photo of lightning in our back yard. My question: is it as hot as a pile of habaneros?

From across the store I could see them – orange habaneros, piled high, glowing like the summer sun. They were small and tender in appearance but, I knew all too well, scary hot on the inside.  Like a crab, I sidestepped across the room, handling several cases of produce before I made my way to the peppers.

“Ouch,” I thought, thinking of the meal to come. “This is gonna hurt.”

I scooped up three small beauties, reasoning that if they can eat six in Guyana, surely I can stretch myself to try three.

By the time I got home, I’d lost my resolve. I’d try one, maybe two habaneros in the Caribbean Green Seasoning.

I cut up the celery, onions, garlic, and herbs – tossed them into the blender, and plugged the machine in.

No more avoiding it. Time for the peppers.

I split a habanero down the middle, taking care to avoid the hot juices, and threw one half in. I didn’t so much look at the second half.

So much for bravery.

I powered on the blender. It burst to life and began to churn the ingredients together. Before the blades could pull the habanero under, I flicked the switch back off and fished it out.

This time I cut it in half again, glancing out the window to see if anyone was watching.

The back yard was clear, as it should be. I returned one tiny, measly quarter of a habenero back into the blender.

After pulsing the mixture I removed the lid and gave it a deep sniff. My eyes burned. I gave it a taste. My tongue burned. Medium heat. “I’ll have to build up my tolerance.” I whispered to the cats, pouring the Green Seasoning straight over the chicken.

The next day, as the chicken sizzled on the grill, I bragged to Keith about how hot the kabobs would be. Later, at the table, we carefully bit into the chicken, water at the ready.

The heat was gone. It was mild. Barely. How did that happen?

My mind spun. Did the peppers just fly away? Volatile oils – is that what they mean by that?

“Didn’t you say there were peppers in here?” Mr Picky asked, grinning.

As if on cue, Ava looked up from her plate and gabbered “Spicy, spicy.” As she spoke, she nodded her head quickly, wide eyed, and reached for her water. She drank and drank.

I smiled at Keith.

At least someone thinks so, I thought, taking another bite. 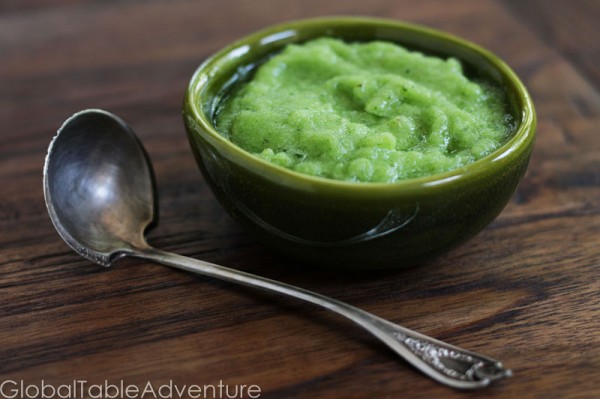 It only takes a few minutes to throw together and keeps well in the fridge, so I can see why the Guyanese add Green Seasoning to almost everything. I loved the flavor – cool and bright thanks to the celery, but threatening to be devilishly spicy thanks to the habanero. I’d like to play around with the ingredient quantities to perfect this dish for my family.

My overly cautious attitude made the Green Seasoning less spicy than even I would like. Next time I might brave a full habenero, but I don’t think I’ll ever work my way up to five, as recommended by locals. Mr Picky might, though. He’s tough like that. 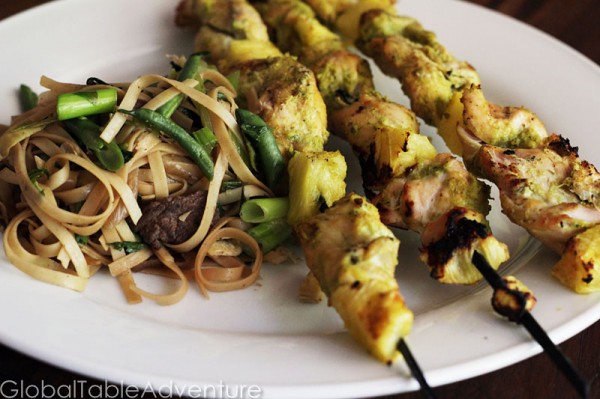 Fun, family friendly, easy. Being able to have curry without heating up the kitchen is a real bonus in the summer.

I marinated the chicken 24 hours which was way too long – the meat became hyper tender – which Ava liked (she has two eye teeth coming in, so soft foods are a plus right now). For most, 1-8 hours is ideal. 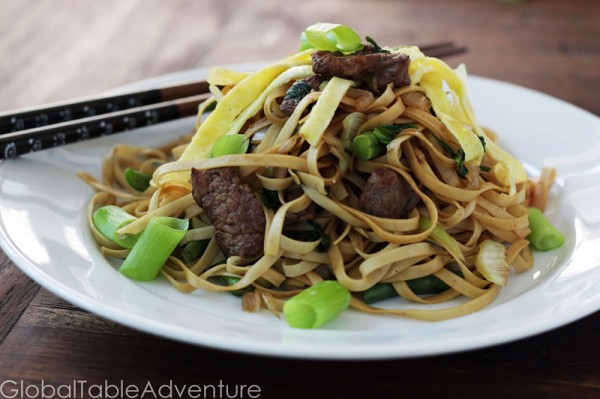 Everything. Especially the glow of hearing Mr Picky say he could eat it any day, all day, even for breakfast. Specifically he liked the textures – soft noodles, crunchy green beans, and bits of meat. I have already made this dish a second time, if that’s any indication of what our family thinks.

Just for fun, I’d like to try round noodles. I’d also like to play around with other veggie combinations. 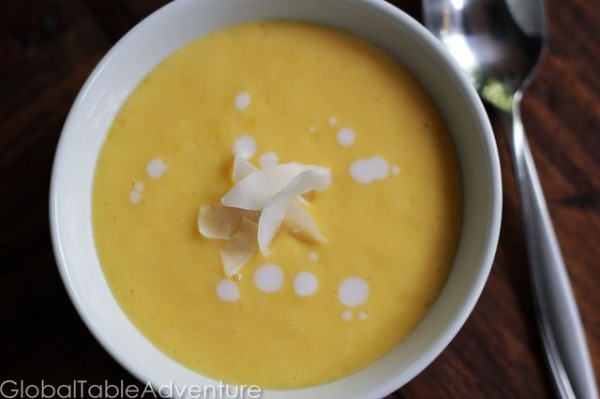 I was completely surprised by how much I liked this soup. I expected it to taste like a smoothie, but the texture was different – lightened because of the coconut water. A real favorite for me. Mr Picky said “I don’t know what I expected, but it wasn’t much. It turned out to be really good.” As for Ava, she’s still trying to figure out if it’s a drink or a soup.

Nothing. I’ll make it all summer long. Or as long as I can find good mangoes. Whichever is longer.