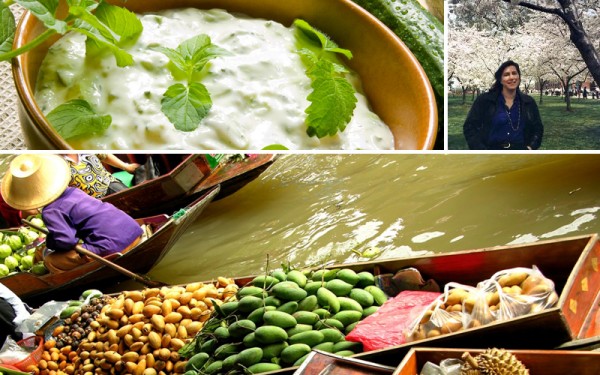 Laura Kelley explores food connections along the Silk Road. Pictured: cucumber dip from western and southern Asia, as well as a floating market in Thailand.

Today I’d like to introduce you to author Laura Kelley. For the last year I’ve happily enjoyed her blog The Silk Road Gourmet, where she pens the most fascinating articles. Curious about the history and traditions associated with Valentine’s Day? She’ll tell you. Want to check out a cauldron of 2,400 year-old soup? Sure thing.  Finally, what if a scientist went out to eat and realizes the food on their plate is a new species? She shares the story.

This Harvard alumnus knows her stuff.

When it came to this week’s culinary adventure into Georgia (not the place where Paula Deen lives), Laura was instrumental – her book, The Silk Road Gourmet: Volume One: Western and Southern Asia, was the jumping off point for 3 of our recipes. The instructions are clear, the writing is vivid, and the final dishes came out impeccably.

Long story short, Laura is a powerhouse of knowledge when it comes to all things “Silk Road.” What does that mean? You’ll just have to read her answer to my first question.

What does the “silk road” mean to you?

Traditionally, the Silk Road is a term that refers to the over-land trade route across Central Asia that linked China with Europe and brought exotic goods (silk, porcelain, spices) from east to west.  A more modern take on that original 19th Century concept includes the multiple land and maritime routes that crisscrossed the Old World linking the countries of the Pacific Rim with those of Northern and Eastern Africa, Western Asia, Europe and the New World.  Nowadays, scholars realize that a great deal more than goods and money flowed on the Silk Road – it was a vast system for the exchange of culture, knowledge and religion as well as material goods. Foods and methods of preparation are recognized as a part of the material culture that was shared on the Silk Road. 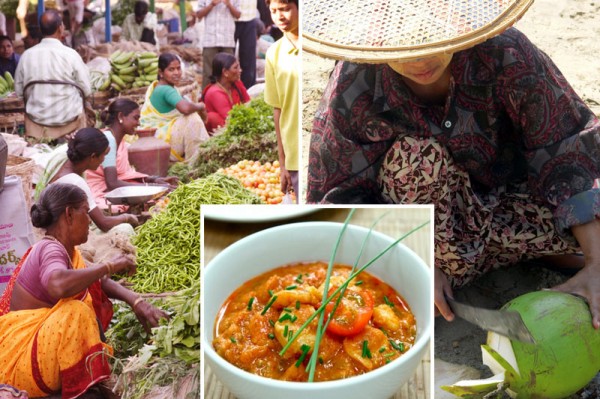 For me, the Silk Road represents the engine of an earlier period of globalization than the one we are experiencing now.  From about 2000 BCE to well into the 16th Century ACE – that’s more that 3500 years – the Silk Road moved people and their ideas and habits around the known world creating the tremendous patchwork quilt of culture we have today.  We have a tendency to think of cultures as arising and evolving in isolation, and this simply isn’t the case.  The Silk Road was a hidden hand in shaping the world we live in.  In The Silk Road Gourmet Volume One cookbook and on the blog, I discuss the connections forged by the early travelers and traders and have found some surprising results.

From the point of view of cuisine and culture, one can use food to retrace connections between countries that were long gone.  For example, the walnut and cilantro sauce Garo from the Republic of Georgia has relatives in Afghan Cilantro Sauce and Indian Cilantro Sauce with Lemon and Garlic.  These cuisine links across thousands of miles were made by successive expansions of the Persian and Mughal empires. 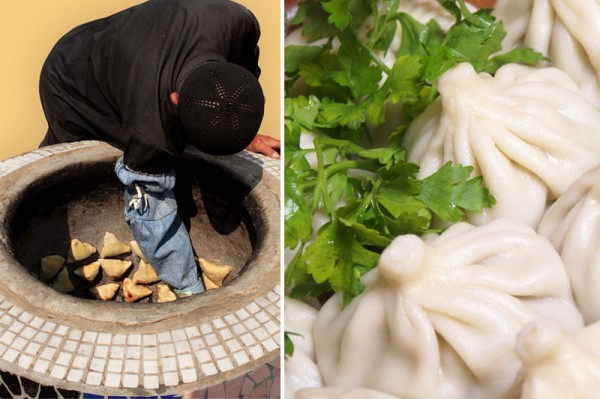 Pictured: Cooking Samsa and a plate of Khinkali (dumplings)

How long do you like to spend in a country to really get a “taste” of the culture?

This is a tough question, because it varies so much.  I lived in SE Asia as a young adult in the American Field Service Program so that was a period of cultural immersion  – living, speaking, eating, Thai culture that I’ve never had the opportunity to duplicate.  Since graduate school, I’ve been travelling as part of my career in science – sometimes as a researcher, other times as an analyst or policy commentator.  My culinary research has largely happened in guest houses, restaurants, markets or home visits as a personal interest.  Most visits last a few weeks, but some countries I return to several times, depending upon the demands of my job.  When I want to hit a country that isn’t on my work itinerary, I book personal travel after my work is done when possible.  After almost 25 years of working traveling jobs since graduate school, the experiences build up. 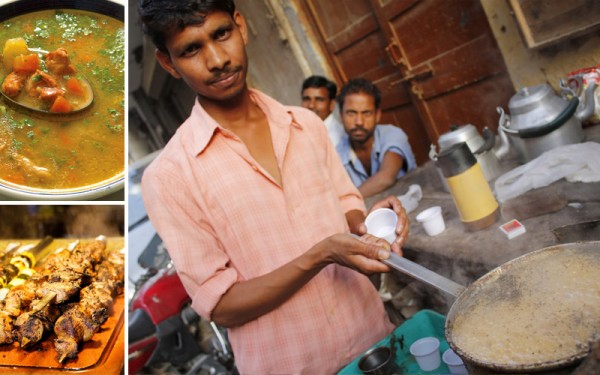 Another great question.  First off, before I travel, I do research on the cuisine, ingredients, methods of preparation and general history of a country, so I know what to look for and what dishes I want to taste if possible.  Then, in country, I like to stay away from big hotels and go for smaller guest houses where one can get a feel for the country.

Needless to say, I eat on the economy as often as possible.   I also introduce myself to the cook at the guest house  where I’m staying and tell them I love local food and want to try x, y and z, and offer to pay (generously) for any ingredients. I ask for recipes and often get them, and I always leave the cook a gift for his work.  In the markets I try and buy, ask for ingredients and recipes, often resort to paying for answers. On those occasions when I have to rely on myself, I break down dishes into ingredients simply by taste – I’m really quite good at it.

I also do follow-up research right here at home to extend my in country experiences.  Eating in restaurants and cooking ethnic foods, reconstructing the recipes I’m given or have deciphered.  Where ever I go or travel, I’m doing Silk Road research.  For example, last night after the theatre in DC we wandered through Chinatown and ate a few unusual homestyle dishes:  Pork Bellies with Pickled Mustard Greens and Chitlins in Black Bean Sauce and a starter selection of fresh (watched them being made) steamed dumplings.  It’s always great to have family or colleagues with adventurous palates dining with you. 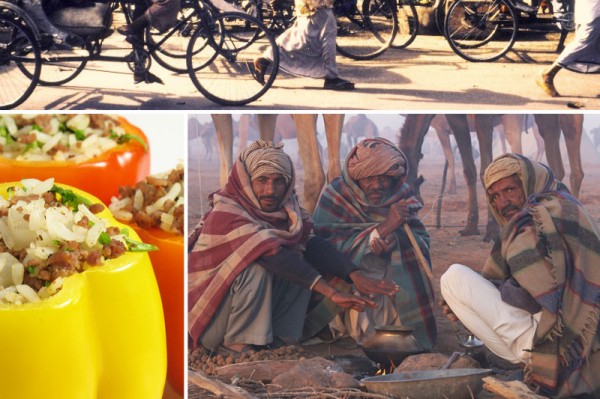 What did you eat as a child and how did it influence your career?

What I ate is probably less important than growing up in an Italian-American household.  Food is sacred for Italians and they spend a lot of time thinking about it, catching it, preparing it and eating it.  From a very early age, I remember spending days and weeks in the kitchen with my mother and sister before holidays – cooking and preparing food.

My introduction to Asian food came when my much older sister started to date a South Asian doctor.  I was about twelve when she took me to an Indian restaurant and that was the beginning of the whole love affair with Asian food.  I was already cooking (I did say I was half Italian) and started to cook Indian.  My first Indian cookbook was one by Madhur Jaffrey.  After I returned from Thailand, I added Thai cooking (long before it was trendy) to my repertoire and country by country, my skills started to grow.  By the time I was in graduate school, I used to have Asian students in my dorm follow their noses to the kitchen and be shocked to find me there instead of a family member or another Asian.

My sister’s romance also opened the doors to Asian food for my mother as well, and she started holding an occasional ethnic banquet – like, “Indonesian Night!” with all Indonesian food.   Back in the 1970s and early 1980s it was really difficult to find ingredients.  We had to go 40 miles down to NYC to get galangal at a small shop in the village. So that was part of it as well.

I’m starting to talk about the Silk Road, and have been invited to be a guest speaker at a few events in the upcoming months.  I’m very excited about that.  I taught in graduate school and have been doing briefings for work for years, but this will be the first time I’m taking the Silk Road on the road.  I’m also finishing up desserts and appetizers for Silk Road Gourmet Volume Two, and am hoping to get that published as early as 2012.  That volume will cover Central Asia, the Himalayas, and the Indo Pacific all areas where east-west “fusion” cuisines exist.  The fusion cuisine in the Indo-Pacific has gotten lots of airplay, the fusion approach to Central Asia and the Himalayas is less well appreciated – so that’s exciting as well.

Thanks for stopping by Global Table Adventure, Laura!

Photos courtesy of Dreamstime via Stephen Kelley and Laura Kelley.