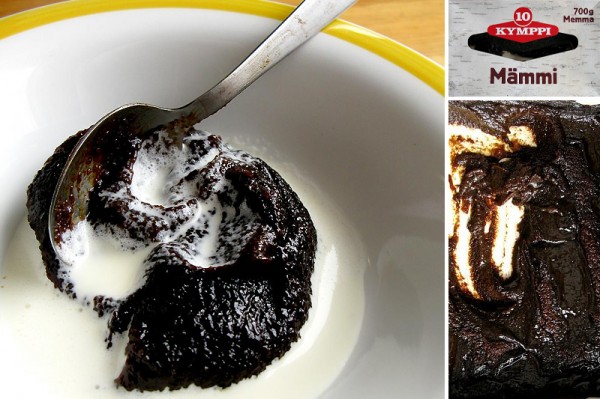 Finns greet Easter with a goopy, black as tar dish called mämmi. If that’s not enough to entice you, let me see if I can adequately describe the flavor. It’s been described as a cross between Guinness and shoe paste. Even with such a distinct look and taste, mämmi is a tradition held seriously enough to warrant protection from the European Union.

Making mämmi is no joke – first you mix rye flour with bitter orange peel, a hint of sweetener, and a few other ingredients. Boiling water gets mixed in and you slowly bake it in a warm oven. Slowly… as in for three hours. Then it has to be whipped until cool. Then it has to sit for a few days. I think there’s some repetition of steps in there somewhere. Finally, and most commonly, it gets served with a splash of cream and a bit of sugar.

If grandma goes to the trouble to make you a batch of mämmi, you had better eat it with a smile – goup and all.

Then? You politely ask for seconds.

If grandma takes this shortcut, however, all bets are off.