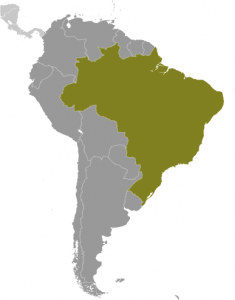 From the towering rain forest, to the coastal plains, we could spend a lifetime sampling food in Brazil. Almost as big as the U.S.A, to say that Brazil brings a lot to our Global Table is quite the understatement.

I’m willing to bet you’ve had some of the local specialties.

Take Brazil nuts, for example. These giants are always the biggest nut in a tin of mixed nuts.  Grown wild, high in the canopies of the Amazon, locals stir them into all manner of tasty cakes and sinful confections. Until about five years ago I always avoided the Brazil nut. The flavor  seemed so unusual – so earthy – and the texture could be… squeaky. It’s true. But, through the years, I’ve made friends with the Brazil nut (as I have with other strange tasting items, like blue cheese and brie). Give ’em a try!

Coffee is another local specialty. Brazil produces more coffee than any other country in the world. If you’ve ever used coffee to lift the cottony fog of sleep from your brain, you’ve probably had Brazilian coffee. For the most part Brazilians grow Arabica, a slightly less caffeinated bean.

Brazil’s unique melting pot reflects a varied history with European (mainly Portuguese), African, and Ameri-Indian influences. To the north you’ll recognize many Carribean and African favorites like coconut, sugarcane, beans and rice, and red palm oil, as well as indigenous specialties . To the south, ingredients become increasingly European as illustrated by their use of pasta. However, there is no distinct border and, like any melting pot, many foods are found in both regions.

The most talked-about dish in Brazil is feijoada completa, or black beans with assorted meats. This dish emerged from the creativity of slaves who had to make due with what little scraps of meat they were alloted (like ears, tails, feet). Today, this flavorful, one-pot dish is considered by many to be the national dish of Brazil and there are as many versions of feijoada completa as there are mammas making it!

Manioc flour, made from cassava (also known as yucca), is another Brazilian staple. Toasted in a little butter until golden brown, this crunchy farofa can be used to top many dishes, including feijoada completa.

But, wait, let’s go back to the topic of meat.

Oh, they sure know how to eat meat in Brazil. Link upon link of smoked, dried, and fresh sausage, leathery sun-dried jerky (called charque), anything pork, and all things chicken… incredible. Churrasco, Brazilian barbecue, takes on gargantuan proportions, as huge slabs of meat are served on sword-like skewers.  For a delightful change in pace, fish reigns supreme on the seashore and along the endless bends of the Amazon. Locals even eat the sensationalized piranha, whose head is considered an aphrodisiac.

And now, for the grand finale … dessert. As I read through the giant list of desserts, one lured me in with it’s beautiful, heartbreaking name – Romeu e Julieta (Romeo and Juliet). What a mystery of seduction and intrigue it must be – slices of sweet guava paste layered with soft, creamy white cheese. If that’s not just the most wonderful concept in the history of simple desserts… Brazilians have also mastered the baked custard. Baked custard is a favorite in Brazil, with flavors ranging from plain, to tropical coconut, citrus orange, and sweet potato.

Yummy. I wish I could cover it all. 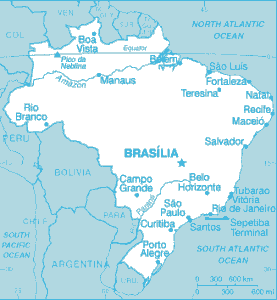