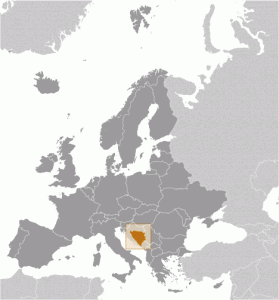 Oh, Bosnia and Herzegovina. No one told me! I feel as though a secret was kept from me all these years. Mountains. Valleys. Rushing waterfalls. Seaside resorts. As I looked through photos and videos of this country I am struck by how incredibly beautiful and timeless the land remains. Like the Sound of Music meets Clash of the Titans… or…. something like that. Last night I put a travel voucher under Keith’s pillow and a pair of clogs by his bedside. Do you think he’ll get the hint? He still hasn’t said anything…

But how could I not be seduced by Bosnia and Herzegovina? In the rugged mountains there lives a people devoted to the old way of life. Families pass down recipes from generation to generation, celebrating simple flavors drawn out slowly. You’ll find freshly grilled meats, baked beans, stewed vegetables, and syrupy sweet desserts. You’ll even see braised meats cooked in earthenware pots. They make plum brandy, wine, and cheese. What more does a person need? 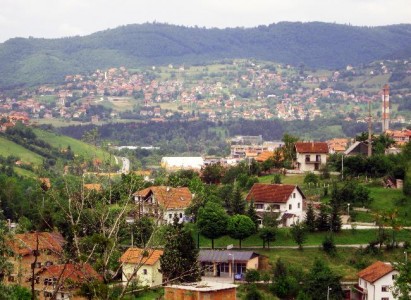 Typically Balkan, Bosnian cuisine reflects the best parts of European and Mediterranean tradition. Although few seasonings are used, the flavors remain intense. For example, ground beef & lamb become addictive mini sausages (called “cevapi/cevacici”) with a simple – yet heavy – dash of paprika, onion, and garlic. With no further ado, these tasty treats are tucked into Bosnian “Somun,” which is soft, doughy, pita-style bread.

What they call pita bread isn’t really the same as what we call pita bread. It’s more like the Naan bread. But they really don’t have exposure to anything Indian in Bosnia, so if you told them it’s just like Naan, they would have no idea what you were talking about.

– Deanna, a Global Table fan who went to Bosnia every summer as a child.

While a long list of vegetables are stuffed (dolma) and stewed, they are rarely vegetarian. Meat fillings are the norm. In fact, about the only way to have a vegetarian dish is to indulge in the ubiquitous tomato, pepper, onion, and feta salad. Topped with red wine vinaigrette and olive oil, this refreshing salad highlights fresh, local produce. Other possibilities include prebranac (Bosnian baked beans with onion, garlic, and paprika) and pickled veggies (which are, however, often served with meats).

The people have a mighty sweet tooth in Bosnia and Herzegovina. Desserts include typical Balkan fare, including baklava,  fruit cakes, cookies, and pies. Walnuts and honey make their way into many desserts, including Tufahi (baked apples filled with walnuts and sultan raisins, topped with whipped cream). After such an onslaught of sweets, Bosnians brew stout, dark coffee very similar to Turkish coffee. Boiled with sugar, the coffee becomes like a black syrup. Sounds to me like real black gold. 🙂 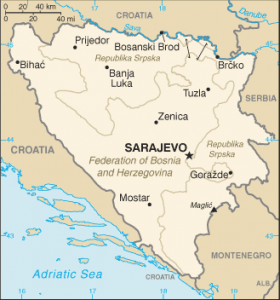