This week is going to be interesting. Simply put, my husband hates mushrooms, rye bread, sour cream, beets, and cabbage… which puts his taste buds in direct opposition to the lovely people of Belarus.

Not one to be beat down by pickiness, I’ve resolved myself to be the cheerful, but broken record:

“Honey, if an entire country eats it, then it can’t be that bad!”

And I’m going to ask (beg) him to eat his entire meal.

The typical Belarusian table is hearty. Potatoes are known as the “bread” of this people. Rumor has it, there are even restaurants that dedicate their entire menu to the potato. They put spuds in anything, from pancakes, dumplings, and soups, to pies, casseroles and salads. In the home, too, families are happy to eat potatoes for breakfast, lunch, and dinner (Source: Please to the Table).

This is not to say they don’t eat bread, too. They do. In fact, bread holds a special place in all Slavic culture. “Bread and Salt Ceremonies” are even held to honor special guests. In such a ceremony, a fresh loaf of bread is presented to the guest, cradled in a beautiful embroidered towel. Salt is placed on top of the loaf, or embedded into the top of the crust. This and most breads are rye because the growing season is too short and rainy for growing wheat.

Maybe I can honor Keith with a Bread and Salt Ceremony. That might get him to eat his dinner.

The cold, rainy climate impacts the Belorussian diet beyond bread. The Belorussian table is restricted by what can mature in the short summers, or survive the cold winters. The table is usually laden with root vegetables such as turnips, carrots, rutabagas, beets, and – of course – potatoes.

When salads are served, they are made with cabbage, beets, cucumbers and/or radishes.

Mushroom picking is something of a national phenomenon in the fall. Here’s a link to a photo of Honey Mushrooms on their National web site. Beautiful! Throughout Belarus, fresh and dried mushrooms are used in soups, sauces, and fillings.

The people of Belarus enjoy a variety of meat, including pork, chicken, freshwater fish (perch, trout, and carp), and beef. Seasonings are typical of eastern Europe and include garlic, onion, vinegar, parsley, dill, and caraway.

Most cooking is done with lard, however they make up for it with “lighter” desserts. Indeed, fresh berries are popular, especially strawberries, bilberries (like a softer, juicier blueberry), and cranberries cooked simply with sugar, cornstarch, and water. The berries can also be eaten with cakes and ice cream for those who prefer a heavier dessert course.

Don’t tell my husband about the dessert, though. He loves fresh berries and this might give him reason to skimp on his meal portions.

As for drinks? A whole book could be devoted to their vodkas, fermented rye bread drink (kvass), teas, coffees, birch juice, and sour milk. The Belarus have a whole word of beverages we don’t know anything about here in the west! 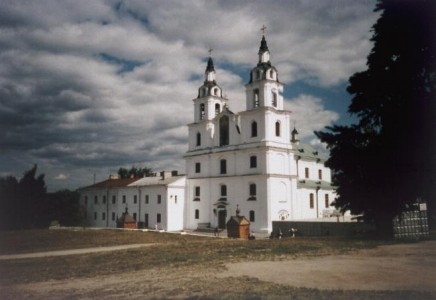