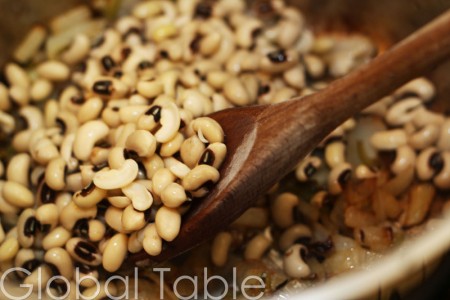 If you’re in the Caribbean, chances are you’re going to have beans on your plate at least once during your stay. Beans show up most famously in ‘Peas n’ Rice.” Don’t be fooled by the absence of the word “bean” in the title, though. In this case “peas” refers to the bean called Pigeon Peas (or Black Eyed Peas). As an alternative Peas n’ Rice is sometimes made with kidney beans. If you don’t end up eating Peas n’ Rice, you’ll probably end up eating a spicy soup or side dish made with black beans.

Dried beans are healthy and cheap. I used to be one of those people who popped open a can of beans whenever I needed them. Then I found out that a can of beans contains my daily allotment of sodium. Unable to stand the guilt, I started to use dried beans.

Dried beans contain no sodium, so the power is in your hands to make them as healthy (or unhealthy) as you want. And beans can be mighty healthy. According to Galen, the high-fiber, low-fat food is the gladiators’ food of choice!

The gladiators with me use a lot of this sort of food each day when building up the condition of their bodies not with dense and compressed flesh, as does pork, but instead rather more spongy. Photo courtesy of the National Library of Medicine

1. Sift through dried beans for yuckies (pebbles, misshapen beans, dirt, etc). Rinse.
2. Soak overnight in plenty of cool water (8 hours). (1 cup of dried beans requires about 5 cups of water)
3. Simmer in enough water to cover by one inch. Cook until tender – anywhere from 3o minutes to two hours.
4. Do NOT add salt until beans are tender:

Add salt only after beans are cooked to tender. If added before, salt may cause bean skins to become impermeable, halting the tenderizing process.

How big do dried beans get when soaked?

Dried beans triple in size when soaked overnight in plenty of cool water.

What should I do if a recipe calls for canned beans and I have dried beans (or vice versa)?

Here are some other useful equivalents:

Should I make a huge batch of beans at a time?

Yes. This is the most efficient use of your time and energy. Once cooked you can freeze the beans in small portions for up to 6 months. Alternatively, they can be covered and refrigerated for about five days.

What if beans give me gas?

That’s right. If you make beans a regular part of your diet, your body will adjust and the gassy effect will become minimal.

a sensation arises throughout the whole body of stretching due to flatulent wind, especially when that person is unused to this sort of food or eats it without proper cooking.

What constitutes proper cooking varies by person.. but here are some the ideas floating around:

Rinse canned and dried beans after soaking …
Use Beano drops…
Try a quick soak in hot water (for 1-2 hours instead of 8)…
Use plenty of herbs like cumin, oregano, turmeric, cilantro, cinnamon, and lemongrass.