I know we spent yesterday talking about the lovely slug-like conch, but we’re not quite done.

Stay with me. You’re going to love this.

You see, I have a mild obsession with children’s stories and it just so happens that there is a Bahamian folk-tale involving a conch. Food often makes its way into folk-tales in interesting ways, and the conch is no exception.

Guess what?  The conch is in a race!

A race! Oh, the silliness.

But perhaps this isn’t so far fetched:

Jumping Snails! A conch does not just slowly creep along. Instead, it can move in jerks. While most other snails have a broad operculum to seal the shell opening, members of the Conch family have a narrow operculum. Instead of a broad flat foot, a conch has a narrow foot that is strong and muscular. The conch digs its claw-like operculum into the sand and pushes against it to ‘hop’ forwards like a pole-vaulter.

So here’s the story:

One day a conch and a loggerhead told the king they wanted to marry his daughter.

A loggerhead is a sea turtle. I’m not sure what a sea turtle and a conch are doing trying to marry a princess, but so goes the story. 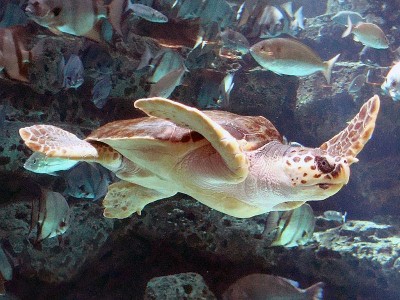 The King decides that the two creatures must race to determine who shall marry his daughter. They ask him what sort of race they must have. The King says “a walking race,” to see who can walk faster.

I guess this is better than a potato sack race or an egg on a spoon race.

The loggerhead was naturally a faster animal, so the conch – poor sluggy –  had to hire some other conchs to help him out. He lined them up at various points along the path.

The race began and off went the loggerhead, leaving the conch behind.

When the loggerhead finally got to the finish line, the real conch was already there, the winner!

True to his word, the King let the conch marry his daughter and the loggerhead swam off to live in the sea from that day onwards.

I’m thinking he banished himself to the sea because he was embarrassed for being such a social butterfly. 🙂