Huh? What? How? Wait a minute!

Was I looking at the wrong region? I swear I just read about this stiff cornmeal porridge last week when I was in Angola! Sources told me that Fungi(e) is served throughout many African countries with soups and stews.

Yet, here I was reading how popular the porridge is in the Caribbean.

Well, the sources are correct.

Turns out Fungi(e) was brought to the caribbean by African slaves. Years later, the dish remains a popular meal foundation, similar to rice and pasta. Sometimes it is eaten in porridge form, however it is also rolled into balls.

Even though I am doing picnic fare this week, I thought you would enjoy learning about Fungi(e). If you would like to try your hand at making fungi(e), check out this recipe. 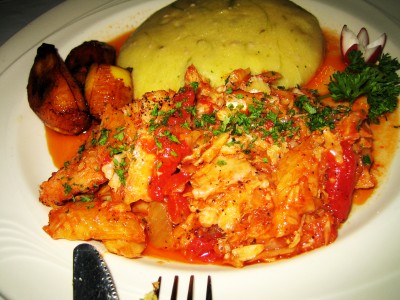 Fungi(e) with saltfish. (Click to view this photo at host site)